Although I called the chase before the large night-time tornado that occurred near Turkey, TX, this turned out to be a great day for storm strucuture, proving that you do not need tornadoes to have a successful chase day. Starting from Tulia, TX after the previous day's chase, my preliminary target was Childress, TX. The dryline today would be farther east, and confidence seemed to be greater among forecasters and among the models that storms, unlike yesterday, would form on or near the dryline, not just far ahead of it. Instability would be good once again, with CAPE in the 3000-4000 range ahead of the dryline. Hence, supercells would be likely and there would be some potential for tornadoes, especially in the evening as diurnal strengthening of lower-level winds would likely occur. My target of Childress seemed far enough ahead of the dryline to be able to intercept any storms that went up near it in the southern TX Panhandle or northern West Texas.

It took a while for storms to get going, but by 3:00 or so I could see storms firing west or northwest of Memphis, a town about 27 miles northwest of Childress on U.S. 287. The first attempt at a storm fizzled after a little while, but another one went up just to its southwest, and this one proved to be more sustained. It was west of Lakeview, and that was where I headed initially, but it was moving northeast and (particularly with back roads impassible due to the previous night's flooding, and even with some main roads having a lot of mud, sand, and/or debris such as logs and tree pieces on them) I did not have the road network to stay with it. So I went back to Memphis and headed northwest along 287, where a rest area fortuitously offered a great view of the storm, which was enjoyed by me and numerous other chasers. By shortly after 4:00 and until around 4:15 the storm, which was somewhat LPish in appearance, was dropping golfball hail near Lelia Lake, just a little northwest of where we were watching the storm. Here are a couple pictures from that location and time frame: 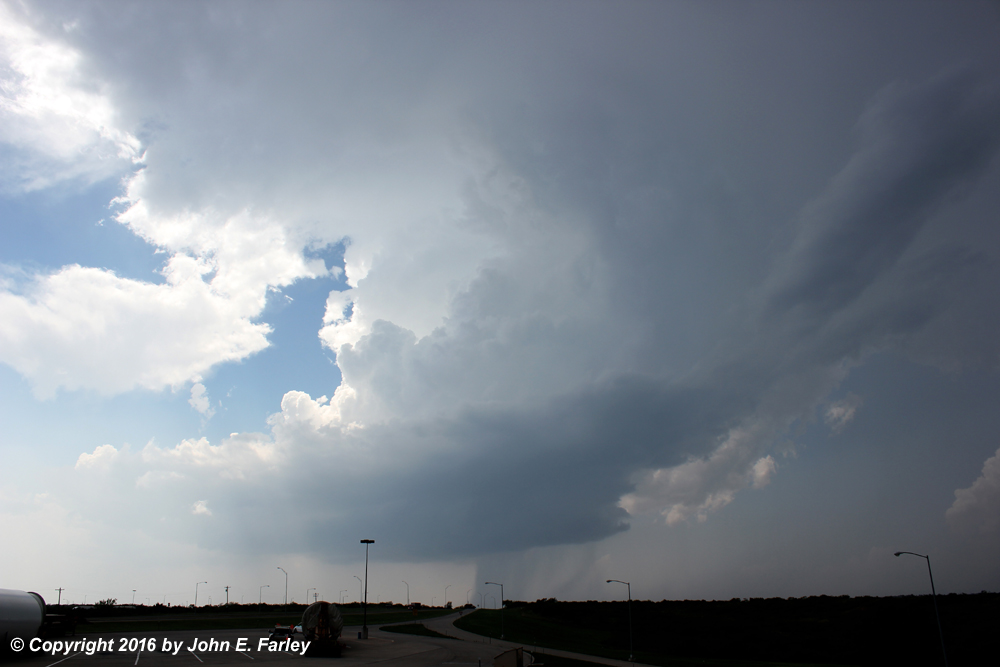 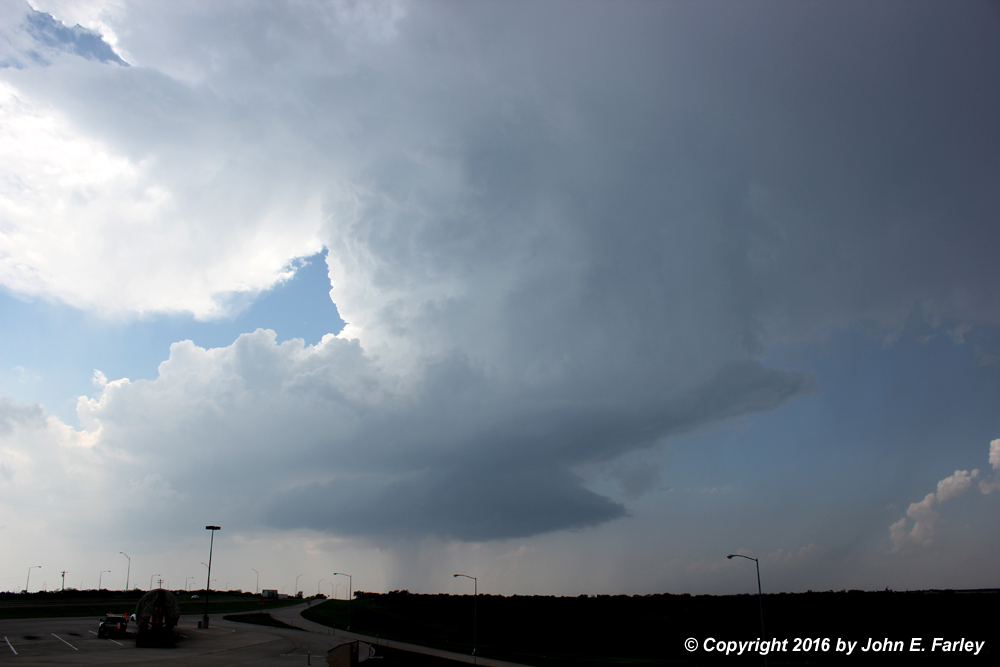 We all watched it from there for a while, as it developed gradually more of a beavertail and become more clearly LP in character. But after a while I knew I needed to head northeast, so I doubled back to Memphis and, after struggling a bit with a poorly-marked detour, was headed NNE toward Quail, TX, which seemed to be very near the storm's path. As it moved that way, it slowly weakened, but it took on spectacular LP supercell structure as shown in the following pictures: 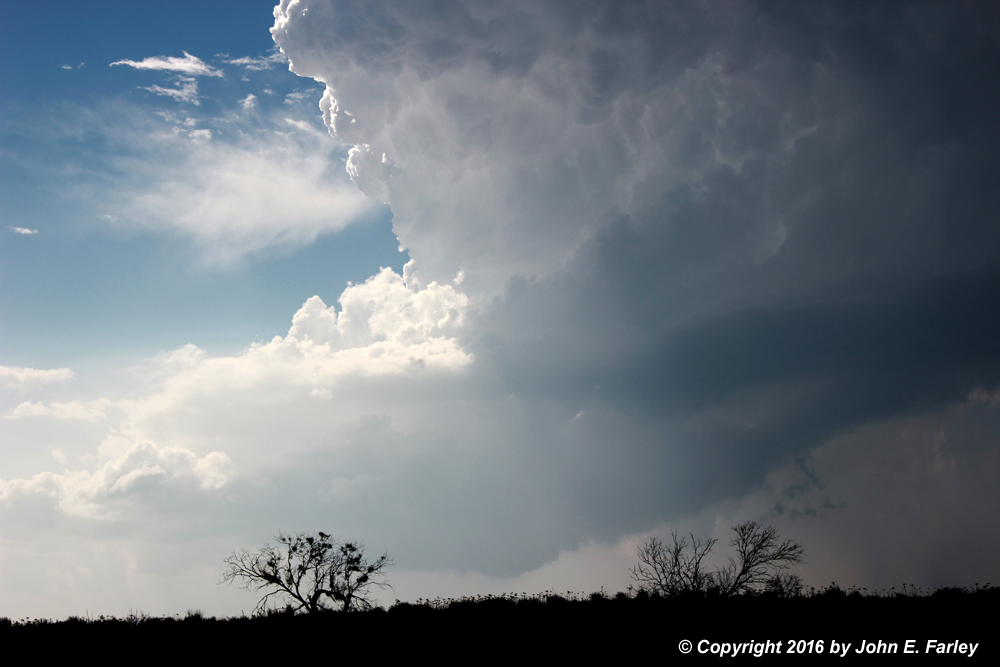 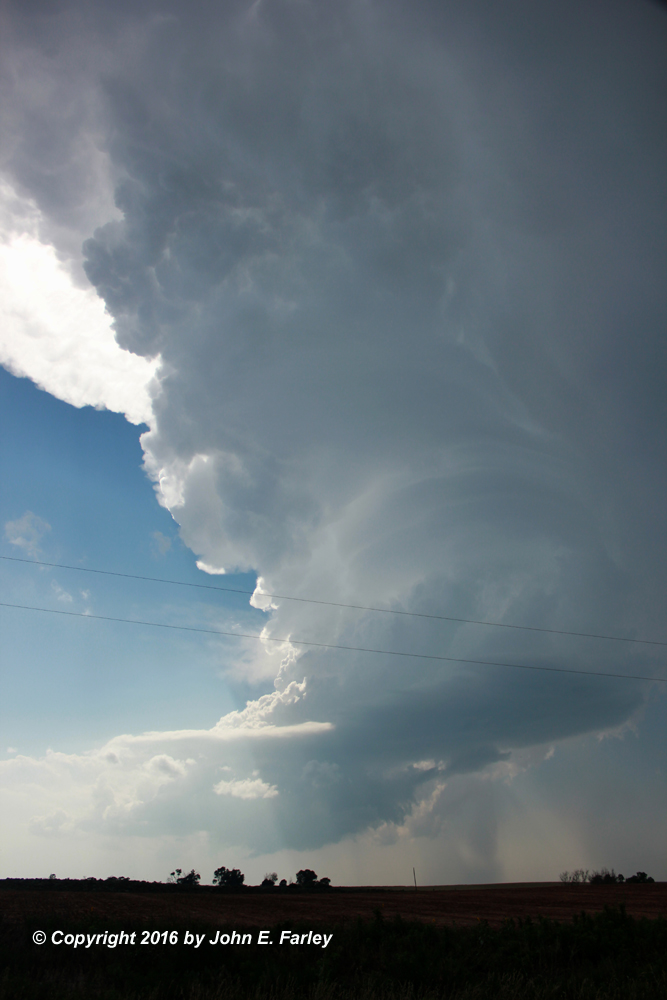 Lots of other chasers were doing the same thing I was, and the quiet back road between Memphis and Quail was alive with chasers. But by the time the storm got to just west of Quail, it was clear that it was weakening and that it was time to look for a new storm. As it turns out, a large cluster of new storms had developed southwest of Memphis, and some of these storms were starting to get SVR warnings by the time I got back to Memphis. Still, I stopped for gas, a pit stop, and a bite to eat, as did numerous other chasers - things were hopping in Memphis for a while. Back on the road, I went through Lakeview then cut south a few miles west of there on TX route 657. Seems like most of the chasers took some other route, because it was not crowded there, and I had a nice chat with a chaser from Nashville who had stopped near where I did. The storms were multicellular and not too organized at first, but after a while the tail-end storm, near Turkey, TX to our SSW, began to look better organized. Between that and the fact that it was the tail-end storm, we both thought it was the one to go for, so south we went. Soon it was SVR warned. I was a little concerned as to whether I could get to TX route 86, which offered an escape route to the NE, before the storm did, but it turned out that was no problem, as the storm was now moving very slowly. This storm turned out be be a right mover if ever there was one. It formed W or WSW of Turkey and initially moved NE. But then, located just barely north of Turken, it turned to the due east. In other words, directly toward my location just west of the interseciton of routes 657 and 86. But still moving slowly, so I had some time. Soon it developed a good-sized wall cloud under the updraft, with some rotation. I really thought a tornado was imminent at this time: 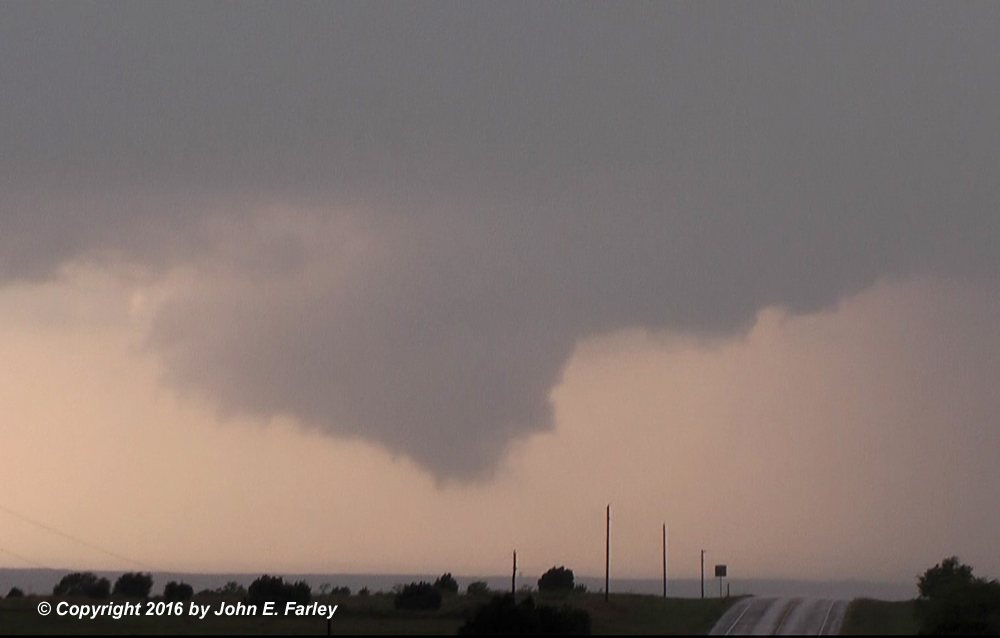 However, the storm was not quite ready for that yet, just dropping quarter-sized hail at this time. But it was clear that it was not about to quit, and it was starting to rain harder and harder at my location. Knowing it was just a matter of time until the hail arrived, I backed off to the northeast, hoping to find a south option to regain position, but finding none until I got all the way back east to Estelline, located on 287 northwest of Childress. From there I was able to go south then southwest on routes 658 and 94 to the Pease River, where 94 was closed due to a bridge out. From near the river, though, I could get a good, though rather distant, view of the supercell, which was maintaining if not increasing its strength. Still great strucutre, and lots of lightning, including the occasional positive CG coming down out of the anvil, even in some cases to my east. So I watched, photographed, and videoed the storm from there until sunset, getting some pretty pictures like these: 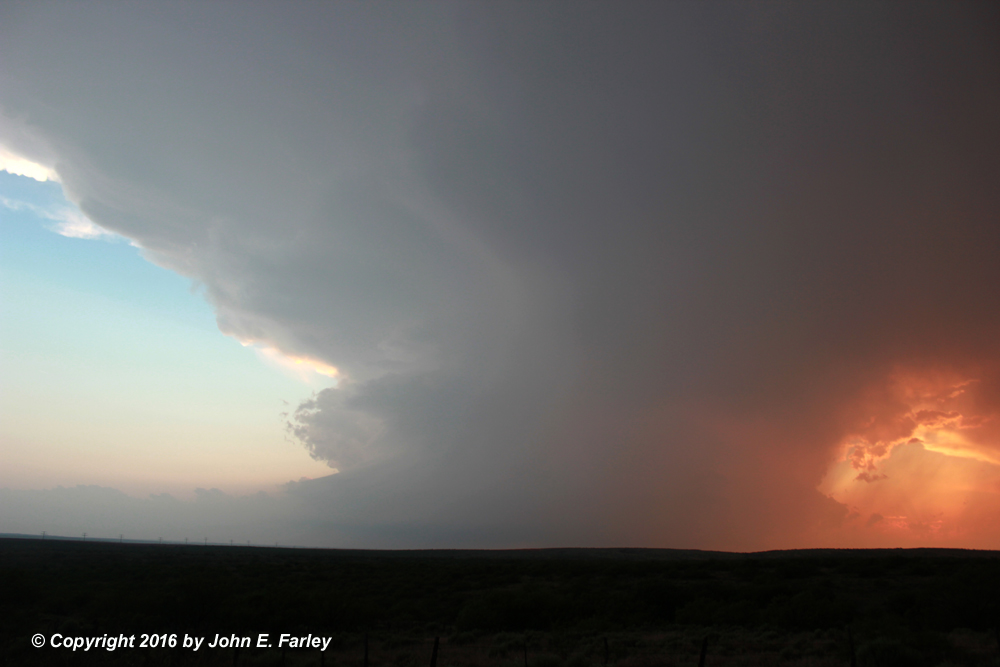 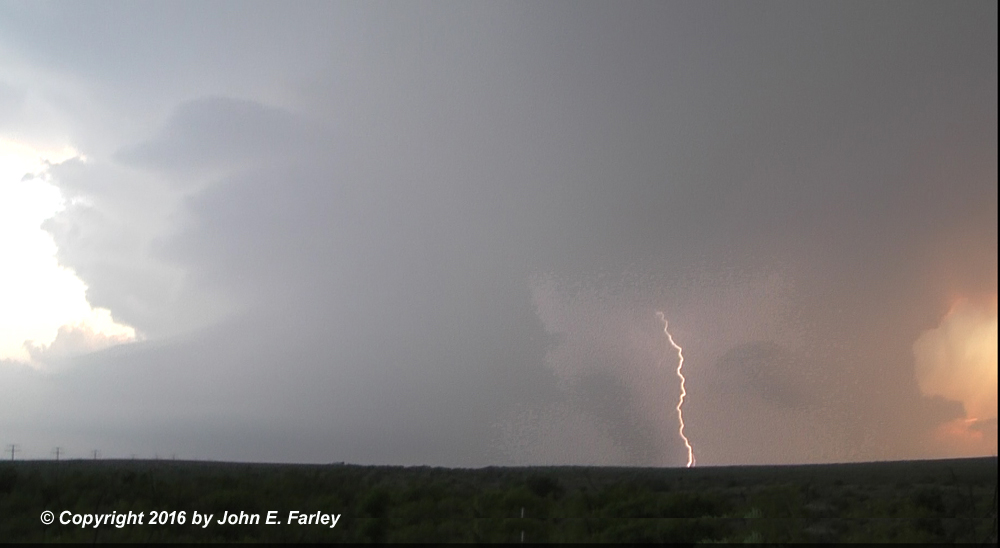 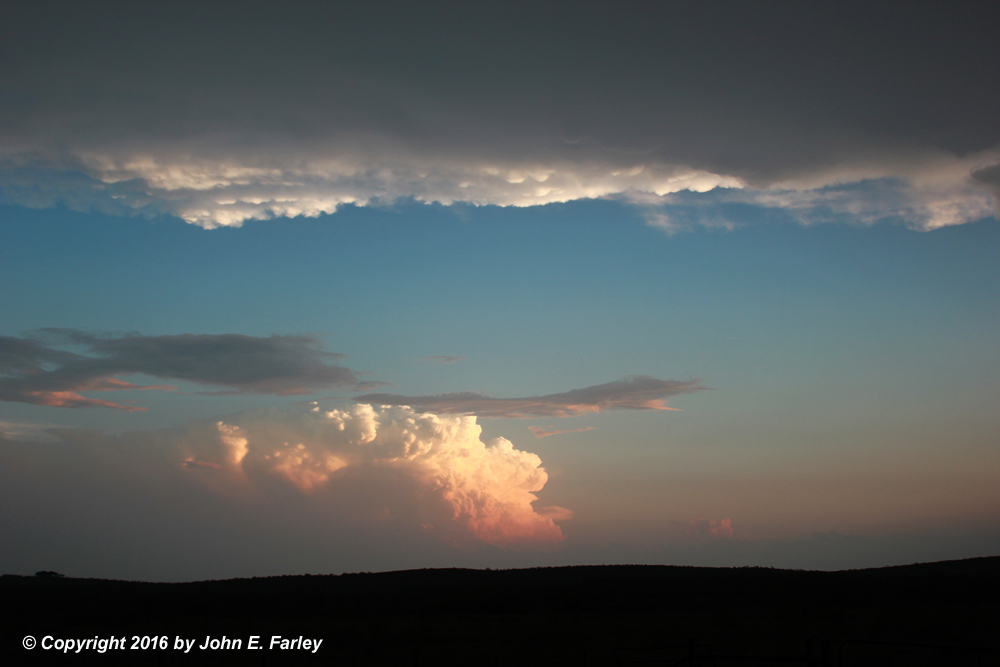 After I got these pictures, it was starting to get dark, and I still had 25 miles or so to drive to get back to Childress to find lodging, mostly on roads I was unfamiliar with. And knowing that most of the roads in the area had been flooded the previous night, I was concerned about possible debris on the road or washouts, so I decided to call the chase at sunset. Unfortunately, this storm waited until another 45 minutes or so later, after dark, to drop a large tornado that, apparently, narrowly missed Turkey but did do some damage in nearby rural areas. Some chasers who held out until after dark and were fortunate enough to be south of the storm got nice pictures of the rather large tornado that formed southeast of Turkey and slowly drifted to the northwest, narrowly missing the town to the east. The storm in effect continued to turn right as it moved very slowly, and pretty much made a complete loop to get back north of Turkey again, moving northwest, about to the spot it was in when I first got on it.

Nighttime tornadoes are dangerous because they are hard to see, and I have no interest in chasing in the dark, so I do not feel too bad about missing the tornado this storm finally put down around 45 minutes after sunset. Especially when the roads are in danger of flooding and/or debris on the roads, as has happened in this area the last two nights. And when I got such nice structure from two different storms!