I wasn't completely sure when I saw it, but after reviewing my photos I am quite sure that I saw a ropy funnel about midway between Albuquerque and Santa Fe a little after 6 p.m., perhaps about 6:15. Around 5:30 I checked the radar, and noticed a storm north of Albuquerque with a 60 dbz radar return. A few minutes earlier, the Albuquerque NWS had issued a Special Weather Statement for the storm indicating a potential for 50 mph wind and half-inch hail near Rio Rancho. Here is a radar image from 5:19 p.m. (2319Z), a couple minutes after the statement was issued. So, I decided to head out from Santa Fe to investigate. As soon as I got on the high ground on route 599 on the west side of Santa Fe, I could see the line of storms. One storm seemed to be moving over the Sandia mountains, and featured brightly lit towers with a lowered area under the updraft. The next storm northwest on the line was backlit and producing heavy precipitation, presumably somewhere near or a little north or northeast of Rio Rancho. I drove down I-25 to the Cochiti Lake exit at the bottom of La Bahada Hill, and could see this view looking to my south or SSW: 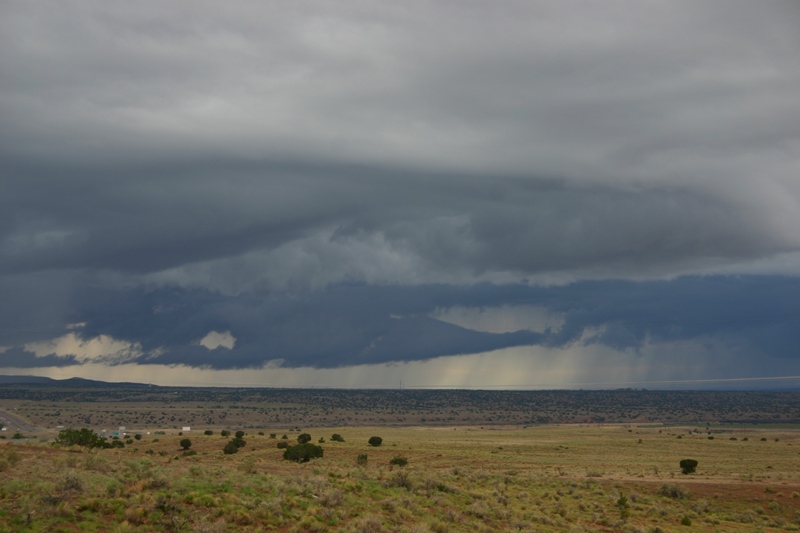 There are two things to note about this picture. First, the prominent lowering in the center of the picture was along the main line of storms between the storm moving over the Sandia mountains and the Rio Rancho storm. I think it formed under the updraft of the mountain storm, but also in the outflow from the Rio Rancho storm, making it something of a hybrid between a wall cloud and a shelf cloud, but probably more to the shelf-cloud end of the continuum. Second, note the precipitation beginning to fall at the far left of the picture, under the left end of the dark cloud base that stretches across the foreground of the picture, ahead of the main line of storms farther away that produced the lowering mentioned above. This closer precipitation and updraft base is associated with the beginnings of the lone cell that produced the apparent funnel cloud. At this time, I decided to move closer, dropping one exit (about 5 miles) southwest to the exit for the Santo Domingo Pueblo. By the time I got there, I was getting into the increasingly heavy rain from the new cell, so I moved just far enough northwest, about a mile, to get out of the heavy rain. I was watching both the main line of storms to my southwest and the isolated cell ahead of the line, just barely to my southeast. After a few minutes, a CG zapped down about a half mile to my southeast, and then just after that I noticed the apparent funnel. As I said above, I did not really think it was a funnel at the time, but I did consider it interesting enough to get a picture of, and after reviewing and enhancing contrast on the photo, I am pretty sure now that it was, in fact, a brief, ropy funnel cloud. Here are a couple images from the picture I took about a mile northwest of the Santo Domingo Pueblo exit from I-25, looking south-southeast through some rain toward the area under the updraft of the storm ahead of the line; the first image is unaltered, while the second image is cropped/zoomed with considerable contrast enhancement to better show the feature: 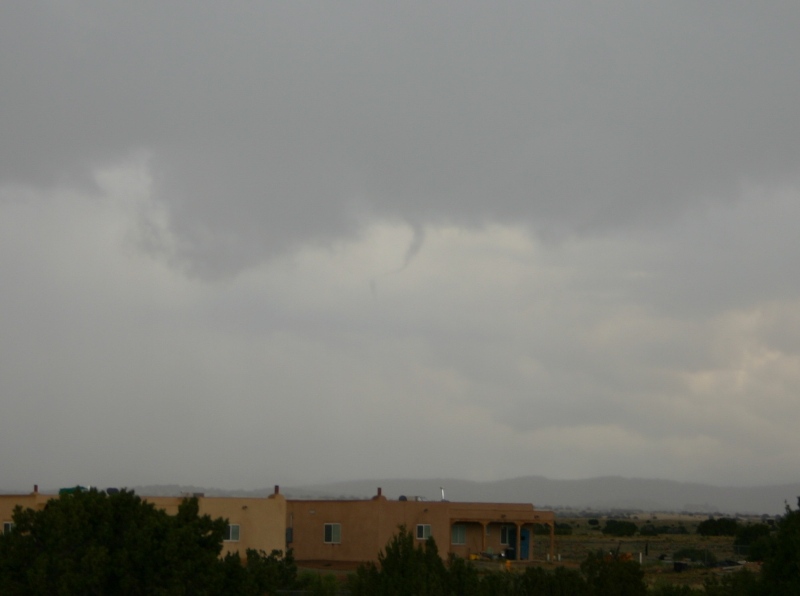 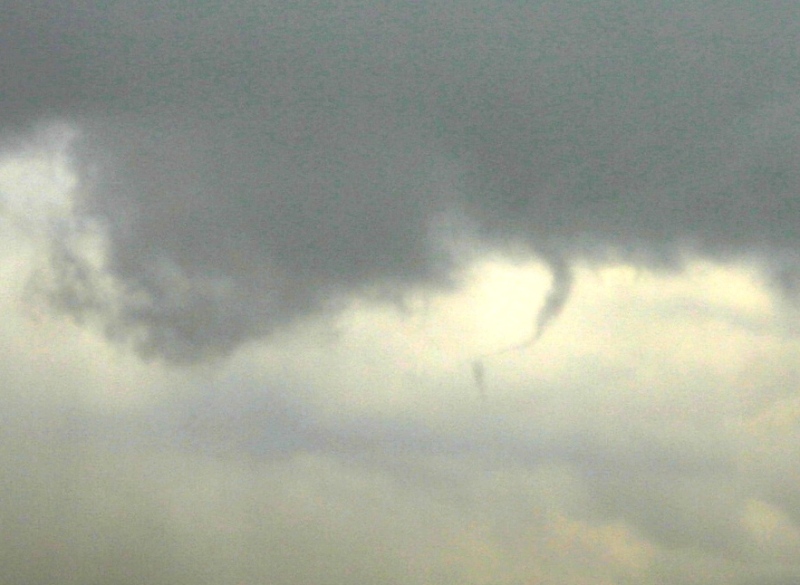 The apparent funnel only persisted for a minute or two after I first noticed it. Although I do not know how long it was there before I saw it, I do not think it was long. Here is a radar image from about the time the apparent funnel appeared. In this image you see three cells with red reflectivity returns between Albuquerque and Santa Fe; the storm that produced the funnel is the one ahead of the line, closest to Santa Fe. The storm peaked in strength around the time the funnel appeared, and drifted north to La Bajada Hill a little west of I-25 before it was absorbed into the main line of storms. I moved back north to stay ahead of the line of storms, which developed a nice shelf cloud but was generally weakening. Still, it was rather photogenic. Note that the leading edge of the shelf cloud on the left side of the picture was moving into the Ortiz Mountains. As it did, it produced this interesting image as its leading edge moved into the mountains: 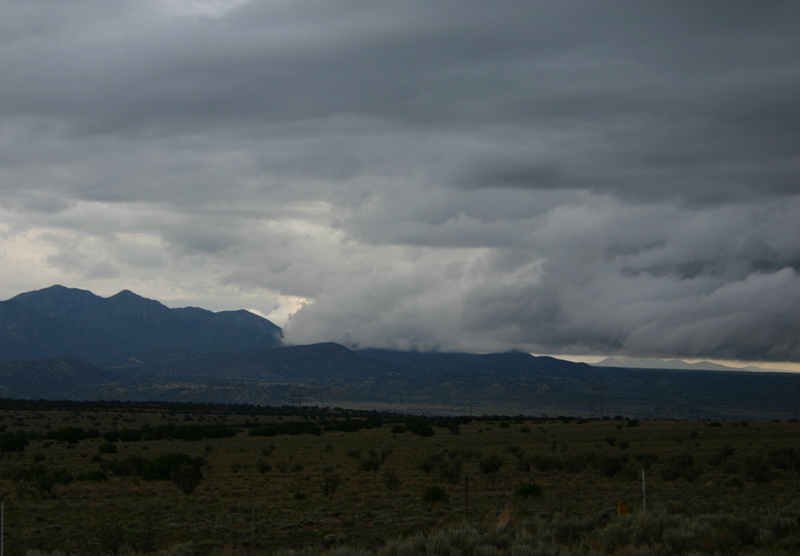 By this time, the storm was weakening, and I headed back to Santa Fe. I did stop at the edge of town to photograph another cluster of storms well to the north, which illustrates the extent to which todays storms were NOT the high-based type of storm that is typical for this time of year in New Mexico. Indeed, with dewpoints of 50 or higher, todays pattern was much more like the late-summer monsoon, but cooler and more driven by a synoptic weather system, in the form of a northward-moving low pressure system moving along the Arizona-New Mexico stateline toward Colorado.