Headed out from my overnight stay in Kinsley, KS and made another gas stop in Greensburg. Today's target would be along I-35 between ICT and OKC - possibly near the KS/OK state line. Dryline would advance farther east today, with storms likely to initiate along it just west of I-35 and then move east. I wanted to be on storms near initiation so I would be on them before they 1) lined out and 2) moved into the undesirable chase terrain east of I-35. I thought the KS/OK state line would be a good spot north/southwise because an outflow boundary from the previous day and night's storms was alligned east-west near the state line. This boundary could act as a trigger for storms, and also locally maximize directional wind shear, making the chance of a tornado greater. Another factor in choosing this target was that I figured the area farther south near OKC might be more crowded with chasers, and anything SE of OKC, although in a meteorologically favorable area, would be in hilly, wooded terrain undesirable for chasing. I would get enough of that already if I had to chase storms very far to the east of I-35, even in the area I was in. Again today there would be extreme instability with CAPE in the 3000-5000 range possible, and decent wind shear, although maybe a little less than yesterday, with surface winds forecast to be from the south and southwesterly winds higher up. North of the boundary, though, the surface wind was a little more backed, and I thought this might enhance the chance of tornadoes near the outflow boundary. In addition to the aforementioned issues of poor terrain and chaser crowds, another challenge for today was that the storms would likely be moving faster than yesterday's, where it was possible to watch the entire lifecycle of a 29-minute tornado without moving. With stronger mid-level winds, today's storms would likely book along to the NE or NNE at speeds up to 40 mph.

After passing through Harper, KS (where it turns out I probably should have stayed) and having lunch in Wellington, KS, I stopped at the west edge of Braman, OK to review data and wait for storms to initiate. I didn't have to wait long, as I saw an impressive-looking storm to my northwest by around 2:00 p.m. This was the storm that initiated near Harper and went on to produce multiple tornadoes between there and Wichita. This turned out to be the best storm chase-wise in Kansas this day, but remembering that not going after the first storm that initiated to my northwest had been a good strategy the previous day, I decided to wait for more storms down the dryline. I didn't have to wait long, as lots of towers were soon visible going up to my southwest, and soon the radar showed isolated strong storms going up to my west and southwest on what, interestingly, appeared to be both sides of the dryline. Perhaps the outflow boundary was enough to trigger storms even in the drier air west of the dryline; not sure what was going on there.

I decided to head west for an intercept but seeing that the road west from Braman was unpaved, I opted to go several miles south on I-35 to the Blackwell exit and head west from there. Soon I was on a storm that looked promising. This indeed turned out to be the right storm, but my strategy for chasing it was not the best. For a while, I managed to keep up with it (sort of) by stairstepping north, east, north, east, etc. on the unpaved roads of Grant and Kay Counties, OK. Amazing what passes for a road in this area! But between the poor roads and the stairstepping, the storm was getting ahead of me, and I knew I had to get north on a better road. I considered route 177, which goes northwest from Braman and on into Kansas. Had I taken this route, I may well have seen the one brief tornado this storm produced. But I did not take this route, because I thought it would eventually put me right in the storm, where I would see little and potentailly get pummelled by giant hail. Indeed, around this time the storm was producing golfball hail. Instead, I blasted back north into Kansas on I-35 and took the first exit, heading west into South Haven. At first, I went just west of South Haven, and had I stayed there, I surely would have seen the tornado. But instead, I figured I was about to be overrun by the storm and retreated northeast into the back roads northeast of South Haven. Not much better roads than the ones in OK. I thought the movement of the storm would give me a good view of the updraft area from here, but the storm backbuilt and briefly dropped a rope tornado, which I did not see, either when I was looking at a part of the storm a little farther north or when I was high-tailing it east on route 166 between South Haven and Arkansas City, trying to stay ahead of the storm. Whatever, I did not see the tornado. By now, the storm was both backbuilding and lining out, so what had been a discrete supercell was now the back-building tail-end of a squall line that extended well northeast through Kansas toward Missouri. But I did know the storm had a tornado warning, so I hung around for a while, watching several intense barrages of CG lightning and occasionally moving east to stay ahead of the storm which, as it lined out, was now surging east in a direction of movement quite different from its original movement toward the NNE. Congratulations to the chasers who managed to pick the tornado out of this challenging situation; I know there were quite a few others like me who missed it. At times trying to stay ahead of the storm was a challenge because of the steady line of chasers blasting east on 166 to stay ahead of the storm; once you stopped it was a real challenge to break into the traffic to get going again.

By the time the storm was nearing Arkansas City, now a surging squall line, I knew I had seen enough of this, and decided to head south, perhaps intercepting a new, more discrete cell farther down the line. This stragegy worked out quite nicely - although I would see no tornadoes today, the next two storms that developed offered me gorgeous views of photogenic supercell structure. The first I intercepted just south of Newkirk, OK, with the storm to my west and moving in a much slower and less erratic manner than the previous one. It formed a wall cloud and a nice RFD cut and soon had a SVR warning. I thought for a while that it had a chance of producing a tornado, but it did not and in fact seems to have produced nothing more than dime-sized hail. But it was a beautiful storm and treated me to a spectacular flash of CG lightning right out of the wall cloud. Here are a couple pics: 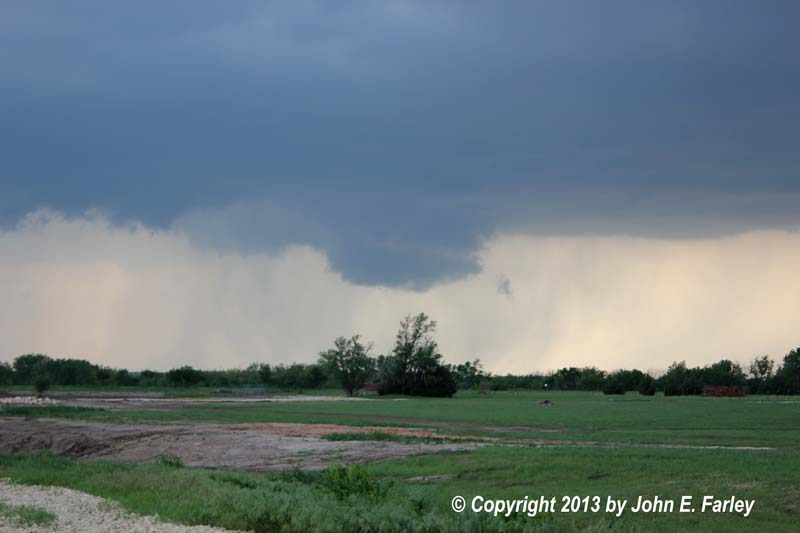 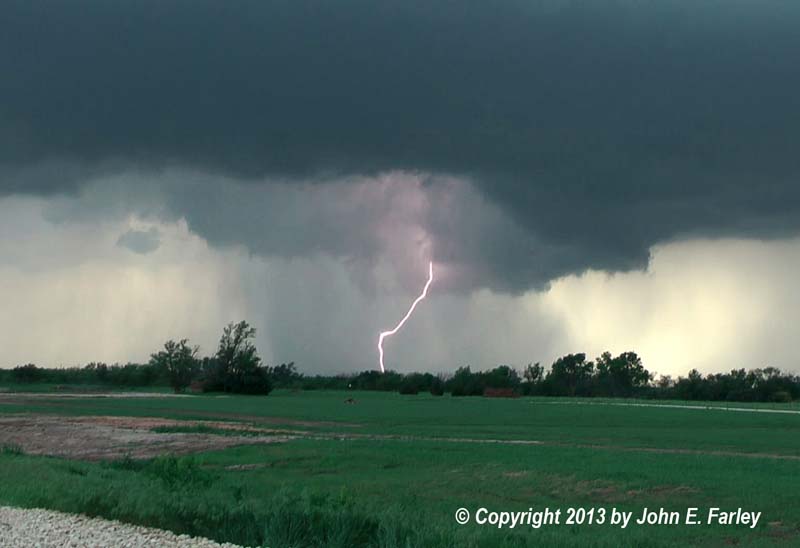 I was able to sit without relocating and watch this storm for maybe 15-20 minutes as it slowly drifted northeast, much slower than the previous storm. And there were only a relative handful of chasers watching this storm, far fewer than the previous one. Eventually, though, the storm was getting past my location, and moving on south to catch a possible new tail-end storm seemed a better strategy than trying to pursue this one back northeast as it merged into the line.

I went south to route 11 and west through Blackwell to pick up I-35 once again. The storm had backbuilt once again as it merged into the line and I watched the flanking line building into the storm just to my north as I entered Blackwell - but it did not look all that impressive and had no warnings, so I headed south on 35. Soon, though, I saw a new, isolated storm going up to my west, so I headed west on 15 to around Billings. A gorgeous, towering supecell was now roughly on the line between Garfield and Grant Counties, just to my northwest: 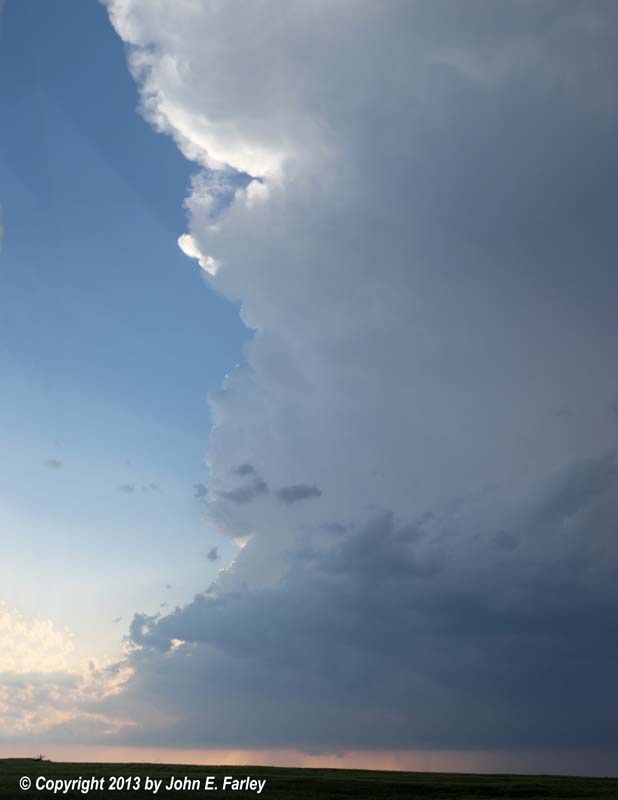 This picture was a photomerge from four shots taken with my 18-55 lens; the only way to get the whole storm in was to either take multiple shots and create a photomerge or use a wide-angle lens. The storm also soon had some nice, sunlit knuckled anvil, as can be seen in this shot. After a while, I did switch to my other camera with a 8-16 wide-angle lens and got these two shots, once again beginning to work my way north on the back roads to stay with the storm: 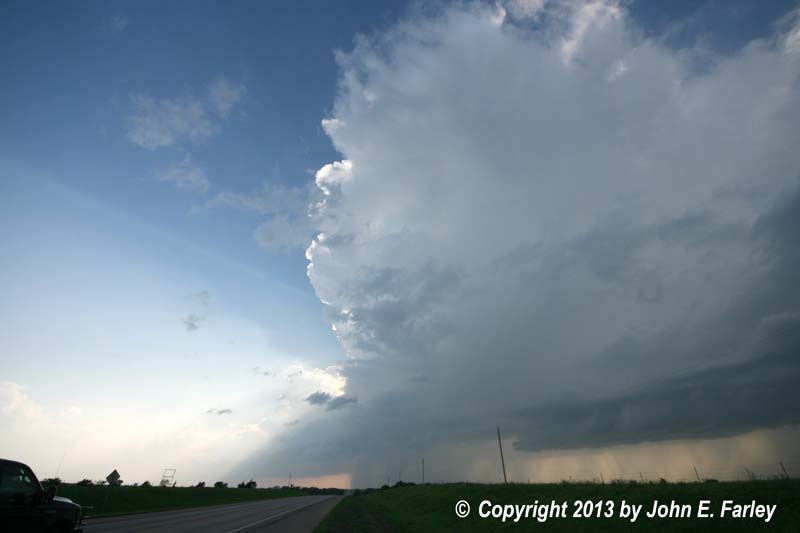 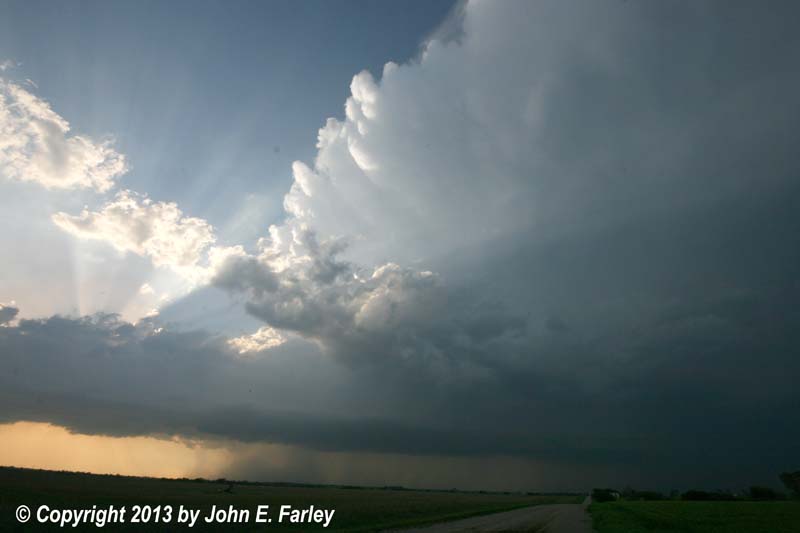 Like the others, this storm soon had a SVR warning, and after drifting along rather slowly at first, it began to accellerate to the northeast, crossing I-35 and moving into the Newkirk area. Since I was on the back roads on what was now the wrong side of I-35, I knew the chase was coming to an end, getting one last picture around the time the storm began to produce severe weather: 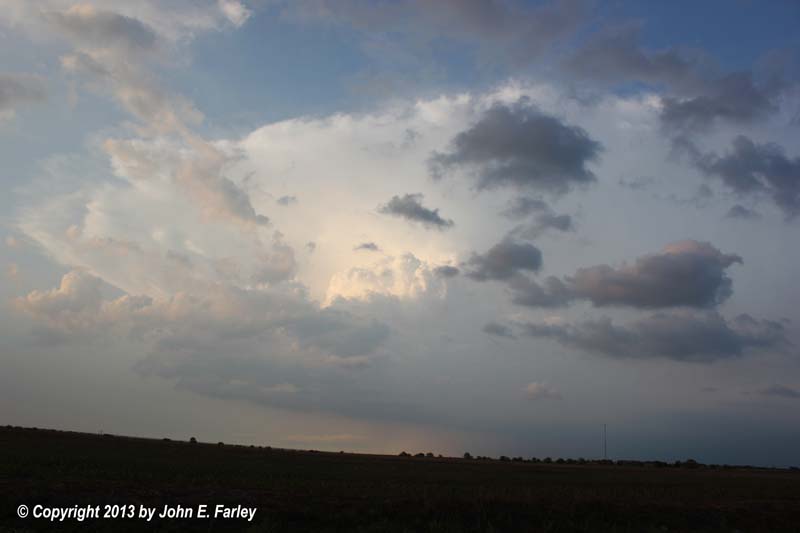 Around the time of this picture, the storm produced high wind east of Newkirk, and it then went on to produce up to 3-inch hail just across the state line northeast of there into Kansas. I followed the back roads into the Blackwell area for at least the third time today, got on I-40, and headed south to Guthrie where I got a room for the night. When I finally got around to dinner around 9, the restaurant had the coverage of the Shawnee tornado running on the TV. Although I knew there had been tornadic supercells in that general area, I was shocked to see the extensive damage and saddened to learn that there had been fatalities.

For me, I would have been very pleased with my storm observations today had I not known that I was on a tornadic storm but somehow managed to miss the tornado. But it is not the first time that has happened, and I still consider it a successful day given the gorgeous supercell storms that I was able to see, even if I did miss the tornado.

Here local storm reports for the three storms that I observed today: