I got on a decent storm just south and southwest of Milan, MO, but missed the tornado from the next storm west (or perhaps its right split) by about 30 miles.

It looked like the day had good potential, with CAPE of 1500 or higher and strong directional shear in northern and northwest MO under the exit region of a strong jet streak coming in from the northwest. Also potential players were weak low pressure in northeast Kansas and a stational frontal boundary near the MO-IA state line. The models all agreed on decent directional shear and instability, though there was some disagreement on how much instability and where the storms would develop. One possible question would be how much moisture would return to the area, and that may have ultimately been what prevented a larger-scale daytime event in the area of interest. Instability looked better farther south, but it also appeared that south of I-70, capping would prevent precipitation until after dark.

I left around 12:20 to head west to Columbia, MO and figure out what to do from there. I ended up hanging around there and later Booneville (20 miles west) from about 3 to 4:30 waiting for something to happen. Convection had fired early in southern and southwest Iowa and by 4:30 had moved ESE into extreme northern MO. The RUC predicted new convection to initiate farther south within the next hour or two, but it wasn't happening on any large scale. Finally around 4:30 I noticed on the radar that a couple storms were trying to form to my NE and NW, about midway between I-70 and the main line of storms. So, I knew I had to blast north.

Within an hour or so, it was evident that nothing was happening south of the main line of storms. The storms to my NE had moved northeast and been absorbed into the line, and the one to the west quickly died out. Still, the storms in the line/cluster to my north were staying discrete and were pretty intense, so I blasted north and a little west, heading up route 5 for an intercept near Milan, MO. The southernmost and strongest storm in the curved line of maybe a half dozen discrete storms was heading for that area, and I thought I could make it there in time to intercept the storm and get there before dark. As I approached Milan, the storm was not SVR-warned but did have a significant weather alert for dime hail and 50 mph wind, and it continued to look the best on radar of the storms up and down the line.

When I first saw the storm, it looked rather outflowish. But as I cut west to get a better look, I could see a nice lowered area that I would call kind of a wall cloud/shelf cloud hybrid - a definite lowered area near the core, with a shelf cloud type feature extending south: 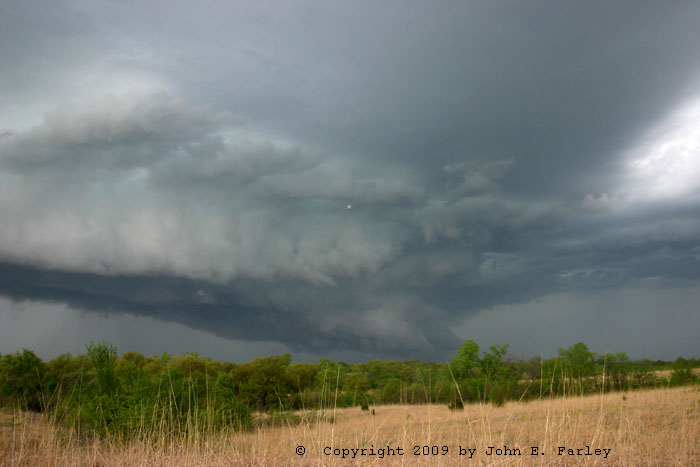 You could even say the storm at this point had a bit of an HP look. Just after 7 another significant weather alert was issued, with penny hail and 50 mph wind indicated 7 miles west of Milan. The storm did look rather menacing, though perhaps again a bit more outflowish, around this time: 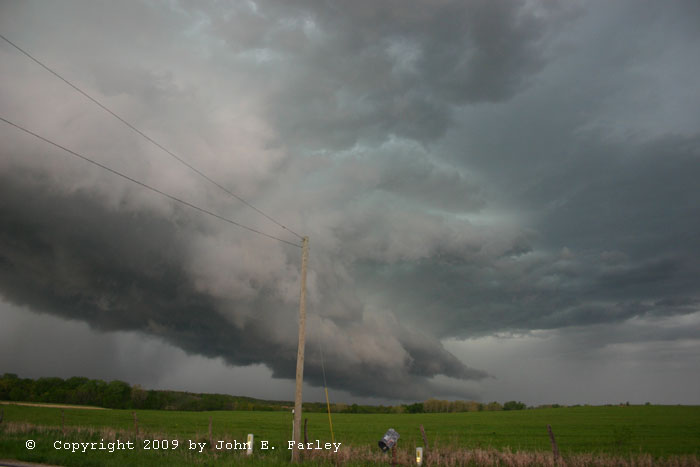 Around that time, the area behind the southward-extending shelf cloud rapidly filled with precipitation as the storm backbuilt toward the south. I retreated back to route 5, and needed to blast south to avoid being blasted by the new core which was now just to my west. I thought I might go south to route 36 and try to re-intercept the storm somewhere to the southeast, but I realized that if I did this I would be too far from the storm to see anyting. This is when I probably should have been thinking about the next storm down the line, but wasn't. My storm was still strong and, although outflow dominant again now, I thought it might cycle and produce something. So, I turned east at Browning to stay with it. It produced a nice rainfoot, and continued to backbuild for a while, producing one more new surge of precipitation south of the main core. But that was it - after that, it started to weaken, and I turned south on CC to 11 to get back to route 36. By now I had lost data, and did not know that the next storm west was really ramping up. I heard a SVR warning, but was unsure of the location of Davies Co., and at the moment had to concentrate on the hilly narrow road I was on rather than looking at maps or fiddling with equipment. By the time I got back to 36, I knew it was the next storm west, and it had just gone TOR warned based on a funnel cloud report. At 7:50 I got back to route 36 and briefly blasted west toward the storm, but after 10 minutes I knew I could not reach the storm before dark, and would likely get blasted by hail due to its southeastward movement if I continued. So, chase over - even though I had just heard the tornado report from northwest of Chillicothe.

As others have mentioned, these storms were for the most part pretty high-based; almost looked elevated. Perhaps this was due to the rather wide temperature dewpoint spread? Also pretty outflow dominant - I am guessing the two storms farther west that turned right and intensified had better instability to work with, and my storm may have been cut off somewhat from that when the others turned right, which may have accounted for its demise. Also as others have mentioned (and you can see in the pictures), I was somewhat taken aback at what lousy chase terrain this part of Missouri is - very hilly, and quite wooded in areas. I had not previously chased this far up in north-central MO, and thought it might be flatter and more open than farther south - but it rivals the Ozarks for hilliness and, in places, forest coverage.

The following sequence of radar images confirms what I said I suspected in the preceding paragraph - my storm was seeded and cut off from the unstable air when the next storm west turned right.

The first image of the sequence above, from 2300Z (6 p.m.local time), was about an hour before I intercepted the storm. Note that there are several cells along the leading edge of the area of convection. The one north of Spickard is the one I intercepted, and is probably as strong as any. By the time of the second image, from an hour later, I was on the storm (the one now near the "d" of Spickard). It was near its peak of intensity, and still looks about as strong as any of the storms. But note that the next storm west has now intensified, and is starting to get a supercell look. I probably should have paid more attention to it, but my focus was on my storm. If I had broken off and gone for the next storm west once mine got east of route 5, I might have gotten there in time for the tornado, if I had gone back south to 36 then west. The third image is from another hour later, about the time of the tornado just west of Lock Springs (southeast of Gallatin). This was from the storm that is now south of Spickard. The storm to my west has become a supercell and made a hard turn to the right (i.e. southeasterly movement rather than its earlier ESE movement), and the storm I had been on has dramatically weakened due to seeding from the supercell now in its inflow area.