For the second time this season, I was able to get great video of a rotating wall cloud that formed almost directly over my location - this time southwest of Woodward, OK. I was very fortunate to be on this storm from before it was SVR warned, so I was able to see the whole evolution from a strong but non-severe storm to a tornado-warned supercell that came very close to causing a disaster in Woodward. Here's the full day's story.

Originally, I was not planning to chase again today after yesterday's chase. I figured the atmosphere would be too worked over after the previous day's storms, especially since the storms kept going all night along a line from central KS down through or just east of the Woodward, OK area and on SW. Additionally, I was lacking in data since I was unable to get wifi where I stayed overnight, and I also could not get dialup internet access, my usual backup when I can't get wifi to work. (Note 1: I need a new laptop computer! It is old and slow, and can't get wifi half the time when it is available. Note 2: If you are chasing in the Liberal, KS area, DO NOT stay at the Rodeway Inn. In addition to wifi not working, the continental breakfast advertised on the sign was unavailable). However, as I was driving back toward NM, I, heard about a MDT risk in eastern panhandles and western OK from NOAA radio in Guymon. This changed my mind about not chasing. I couldn't get wifi in Guymon (did I mention I need a new laptop?), but I knew at the least that I needed to go SE. In Guymon and Liberal, the temperature was in the upper 50s or lower 60s with a northeast wind and cloudy skies - clearly in the cold pool from the previous night's convection. Any juicy air capable of producing interesting storms would be to the SE, ahead of the outflow boundary from the overnight convection. So, since I couldn't get wifi and knew I needed to go SE, I returned to Woodward (where I knew I could get wifi, because I had the previous day) to get data, lunch, and gas. Along the way, I crossed under some elevated thunderstorms that were in a NE-SW line to the northwest of stronger convection over central OK. Here is a picture of one of the storms in the line - an interesting feature is the diagonal angle of the rainshafts, which occurred because the storm was moving northeast with the winds above the surface cold pool, but the rain was falling through the cold pool where the wind was blowing the opposite direction, FROM the northeast. Amazingly, when I proceeded on and arrived in Woodward to get data, I discovered that without having had data, I have managed to put myself near center of 30% hatched tornado outlook. Looking at radar around 1 p.m., I noticed discrete cells to my SW, so I headed south toward Elk City.

I quickly noticed a pretty storm to my SW as I left Woodward headed south on route 34. The storm looked good, and I also heard a signifigant wx alert statement saying that it was strong and intensifying. I headed west from Sharon to intercept the storm. I soon observed a rapid increase in CG lightning. A new signifigant wx alert statement said that the storm may go severe soon, and soon that was followed by a SVR warning for Woodward Co. I had perfect position on the storm, about six miles west of Sharon. The CG lightning stopped after a few minutes, but the storm was looking better and better, as rising scud formed near a new area of heavy precip. There seemed to be some shear along the leading edge, but no rotation, and the shear was more favorable to anticyclonic rotation than cyclonic, as the leading edge of the scud moved south while the back side moved north. After watching for a while, I realized I needed to move back east a little, as a lowered area under the updraft was approaching very close from my south. This was just after 2 pm. As I moved a half mile or so east, a TOR warning was issued for rotation at about my exact location! After moving east, I stopped and looked up to see a rotating wall cloud almost overhead, just to my WSW. I got video, then had to move again a little farther east as it was headed right for my location. I got additional video after this second move east.

Part 1, from the first place I stopped after the TOR warning.

Part 2, from my next stop, another half mile or so east.

As you can see in the video, the rotation was definitely cyclonic. At the second place I stopped and got video, the south wind just ahead of the meso sharpened noticeably as it passed just to my west. Amazingly, I had this storm to myself except for one local spotter. We both headed back a couple miles to the first paved north option as it wrapped in rain once it got to our NW. After a couple miles north it emerged from rain with an RFD cut to its west. The rotating wall cloud seemed a little forward relative to the RFD compared to what is typical. At this point, a small funnel cloud formed under the wall cloud.

Photo of wall cloud and funnel: 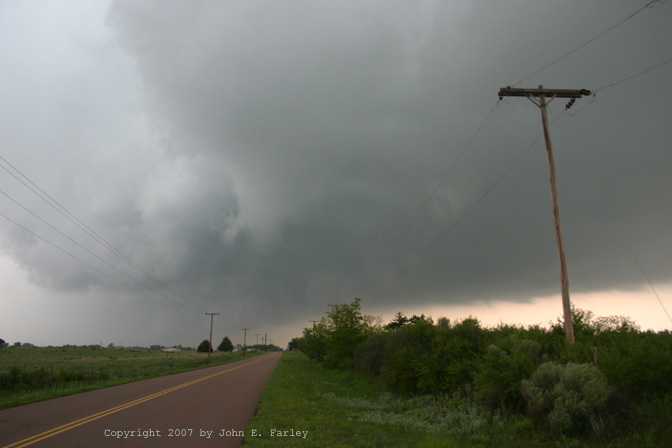 Wrapping rain/hail to my west, coming fast, soon forced me a little more east. Sirens were now blaring continuously in Woodward. As the wall cloud passed over the SE edge of Woodward, a narrow white column appeared under it. I thought possible tornado but it also occurred to me that it may have been a hail shaft. After reviewing my video, I am still not sure what it was, as the contrast was not very good at this time. Here is a video still of this feature: 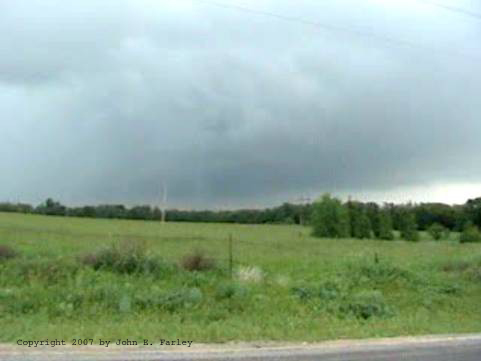 I heard no reports of tornadoes in the Woodward area, so I am inclined to think it was either a funnel cloud that extended lower but did not touch down, or a hail shaft. It was alligned quite perfectly with the wall cloud, whatever it was. It is fortunate that no tornado occurred, as the meso went right over a populated area on the southeast edge of town.

Update - Now that Storm Data is out, I can confirm that no tornadoes occurred with this storm in Woodward County. There were reports of 3/4 inch hail in Woodward and off to the northeast, but no tornadoes

As the features I had been watching soon again disappeared in wrapping rain, I blasted back to route 34 then north. Lots of chasers there now. I followed the un-numbered continuation of route 34 north from where 34 intersects with 183, 270, and 3, but again wrapping rain and hail close in and I backed off to the south, back almost to 183/270/3. If I had realized how close to route 412 I was, I would have continued on rather than going back south, and then blasted east on 412. The storm was now starting to line out, and the supercell I had been watching was evolving into an HP embedded in a squall line. But it stayed TOR-warned through Woodward Co, through the Alabaster Cave State Park area, and on north into Woods Co. Total of 5 TOR warnings in OK and at least 1 in KS. I am not sure whether it was this cell or another one that later produced tornadoes around 4:30 farther north in Kansas.

Since I could no longer get position on the lining-out storm, I let it go a few miles NE of Woodward, maybe 10 S. of Alabaster Caves. This photo, looking west from this location, shows how lined-out the storm had become by now. I then headed south toward Elk City to try to get tail end of the line or more isolated storms S of the line. But that was not to be - the storms lined out clear back into TX. Wind, hail, and flooding rain, but no more TOR warnings. I did have a little hope because, as shown below, some irregularities in the line did form south of Elk City: 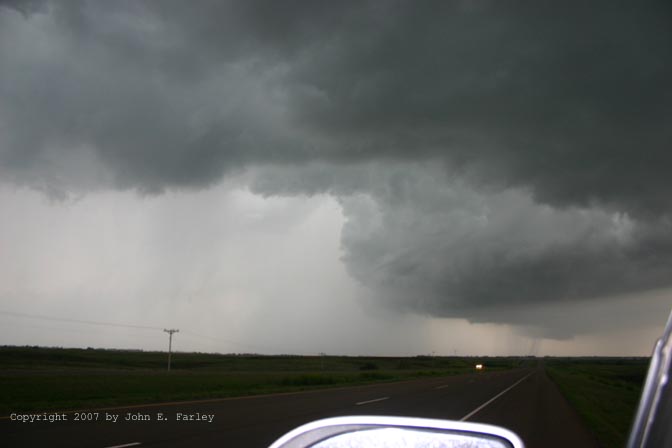 Around 6 pm. I punched through the line on I-40 after poking about 15 miles S of Elk City to watch the storms. However there were no new SVR warnings for this part of storm, until just after I poked through the line on I-40. 40 turns SW there, and it was now paralleling the line of storms, which were now moving almost north. A new SVR was issued for my location (Beckham Co) as I approached Sayre, and I got a couple big hailstones so bailed off 40 to get gas and under the roof at Flying J. No power there or at any stations in area, so no gas. But I do have shelter from the hail, along with others including a TV chase crew. The largest hail I saw there was penny, with gusty S or SE outflow wind and heavy rain. However, from the sound of them, a couple of the hailstones I encountered before I got off 40 were likely larger than that. When the storm abated after 10 or 15 minutes, I went west one exit, but still no power or gas. At that point, I edcided to end the chase and shortly later finally found gas in Shamrock, TX. I did get a nice mammatus pic just east of Shamrock.

This day provided some redemption after my tornadoless day Saturday when I managed to set up in the one part of the plains that stayed relatively tornado-free, then mess up the one chance I had to see a tornado with a bonehead road choice. Total chase distance for the two days: 1498 miles.

Radar from 2:08 p.m., when I first observed the rotation. My storm is the eastern one of the two just northeast of Gage on the radar map.

Radar as the storm went over Woodward, 2:29 p.m. Note the storm remains discrete, and the core has intensified dramatically.

Radar from around 2:00 p.m. - still supercellular, but now becoming embedded in squall line.