Forecast: Supercells would develop ahead of a dryline that would be somewhere in eastern NM or the western TX Panhandle, southward from a low that would track from northern AZ toward the NM-CO stateline. Some disagreement existed among the models (both model to model and run to run) on how far east the dryline would be, ranging from near the NM mountains to near the stateline. Two areas of storms were generally forecast by the models, one in northeast NM or the TX panhandle, the other in the Permian Basin. Since the latter was too far for me, I focused on the northern area. Most models agreed storms would initiate between 20z and 0z somewhere near Clayton, NM, but some had them west of there, others near there, and others east of there. Several showed a cluster of multiple storms somewhere in the northwest TX Panhandle, which is pretty much what happened. Instability would be at least decent and directional and speed shear strong, and capping did not appear to be an issue. But moisture return, and hence to a lesser degree, the amount of instability, would be a little more uncertain. One scenario in some of the models and more so in real-time data during the morning was that the best moisture and instability would be in NM, while storms were most likely to fire a little farther east, in lesser moisture. This could lead to high based storms and reduce the chance of tornadoes, which is pretty much what happened. But supercells and large hail looked like a slam dunk, and very large hail and tornadoes were at least possible.

Timeline of the chase:

10:30 a.m. MDT - I headed out from Raton, NM on U.S. 64 toward Clayton. Preliminary target was an area bounded by Clayton, NM, Dalhart, TX, and Logan, NM. I would be able to shift east or southeast as needed, but initiation was expected to occur in NM. As I leave Raton, in the sky I can see smoke whisps from the fires in the Sangre de Cristo Mountains, taking on this appearance because of waves in the wind blowing the smoke, likely induced by the wind blowing over the mountains.

1:00 p.m. MDT - In Clayton, I had crossed dryline into a more moist airmass. But it was moistening up slowly that far north. Best moisture surge was into NM west of hwy 402 from Clayton to Nara Visa. The highest (50+) dewpoints were near and south of I-40, but surging north, again mainly in NM, less so in TX. Time for lunch at what turned out to be an excellent Mexican restaurant in Clayton (87 Cafe).

2:30 MDT - some radar returns near the NM/TX state line, all south of Clayton. I shifted SE on U.S. 87 into TX Panhandle.

4:00 CDT - by now had doubled back toward Texline to check out a couple isolated cells on radar. Unimpressive. Meanwhile, a large storm SW of Dalhart continued to intensify.

4:30 CDT - In Dalhart. I am watching 2 supercells, one to the SE of Dalhart and one to the SW. I get a picture of hail shafts in the SE cell, and some nice storm structure pics on the SW cell, which produced a nice wall cloud/lowered area. This would actually be the most lowered area I would see on this sotrm, but other eye candy awaited. Large SVR warning covers both cells. I wanted to cross in front of the SW cell, but the two seemed to be merging so I backed off. They merged, so I decided to move north out of the path of the SW cell, which was headed right for Dalhart. Plan was to let it pass, then circle around it and try to get on south/east side. It was moving slowly, 15 mph per radar. From this time on through the rest of the chase, this storm is SVR warned. Every time a warning is close to expirng, a new one is issued, with mention of hail up to 2 inches and 60 mph wind.

5:00 CDT - (Not so) patiently waiting for the storm to get east of my route SE from Dalhart on U.S. 87 so I could get around the storm without getting caught in hail. It was moving slowly, and a little more to the right than before. Once the storm cleared 87, I hoped I could go east from Hartley and get ahead of the storm, with it (hopefully) staying just north of my east route on U.S. 87, which runs SE from Dalhart to Hartley but then east from there.

5:40 CDT - On 87 near the southeast edge of Dalhart, I encounter hail accumulation on the road and in the fields, with a spectacular double rainbow to my east. Here are a couple pictures: 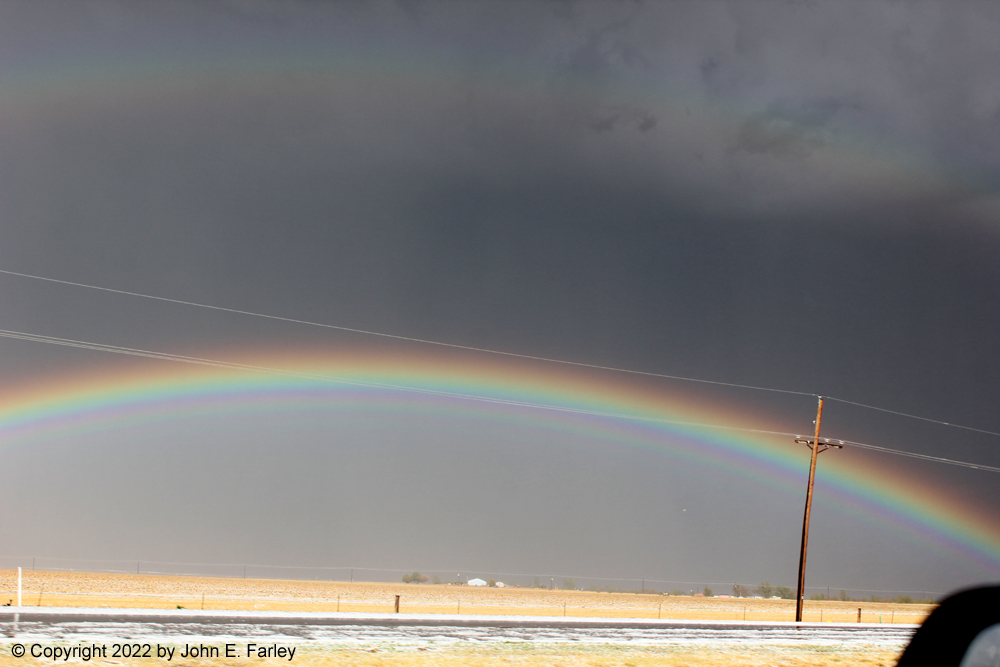 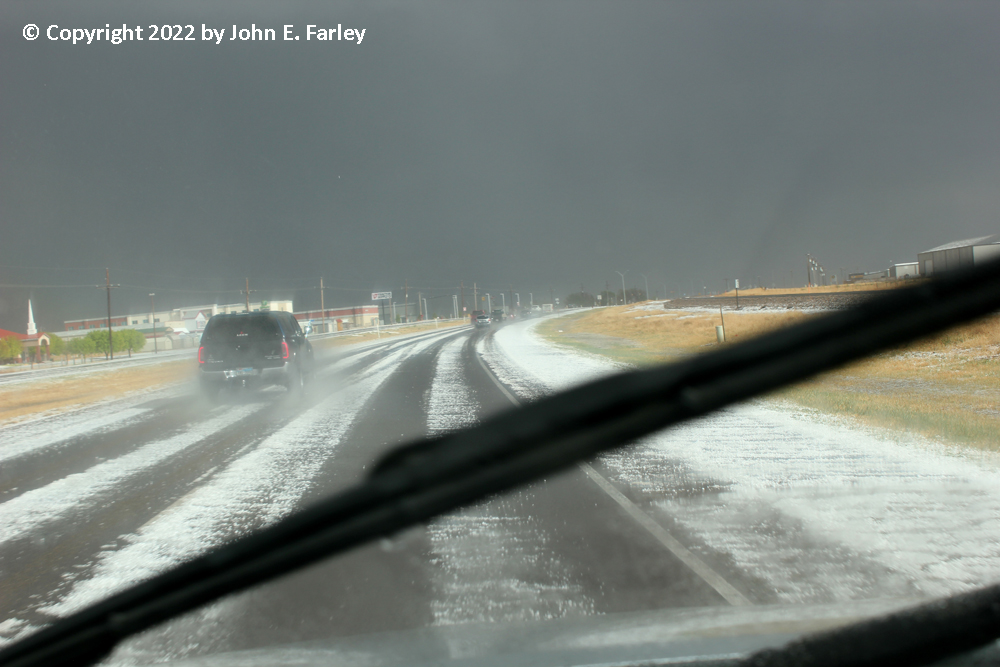 The largest hailstones I found were 1.25". However, there were reports of hail up to 1.75" (golfball) at a couple locations within a few miles of where I was. There was at least some hail on the ground most of the way from Dalhart to Hartley. Near Hartley around 5:50 CDT, I see the first of what would be many streams of blowing dust into the cell. Not sure if this first one was a rear inflow jet or RFD, but I think probably the former.

6:00-6:30 CDT - Heading east on 87. It splits from 385 at Hartley and heads east toward Dumas and Stinnett. The precipitation narrowly missed Hartley to the north, and tracked east just north of 87. As I head east, I begin to run into bands of intense, dusty inflow surging north into the storm.

6:30 CDT - I cross the first intense, dusty inflow band and stop ahead of it and get pics of the dust billowing high into the sky as it surges north toward the meso. Radar is showing broad but strong rotation at this time. Here is a picture of the dust plume associated with this inflow band just after I got ahead of it: 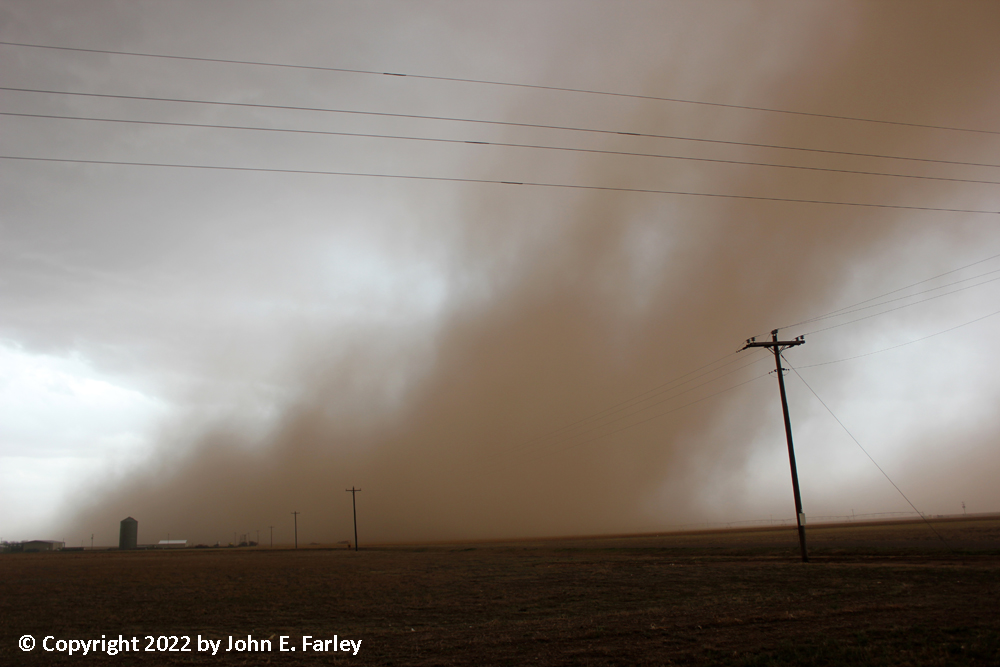 6:30-6:55 CDT - ASOS and mesonet sensors record numerous severe gusts associated with inflow into the storm SW and SE of Dumas. The highest measured gust reported was 72 mph, nearly hurricane force! I drive through Dumas amid repeated intense, dusty inflow bands, eventually getting into an area with a little less dust and inflow east of Dumas.

7:00-7:15 CDT - I observe cloud-base rotation and converging dusty inflow bands from the east and SSE into the meso. Extremey dusty right under the meso. Kind of looks like it would if there was a tornado, but I could not confirm rotation in the intense dusty area under the rotating cloud base, and the cloud base was quite high. I think it was just a lot of dust and wind associated with converging inflot jets. Most intense, dusty inflow I have ever seen! Here are some pictures of this dramatic phase of the storm: 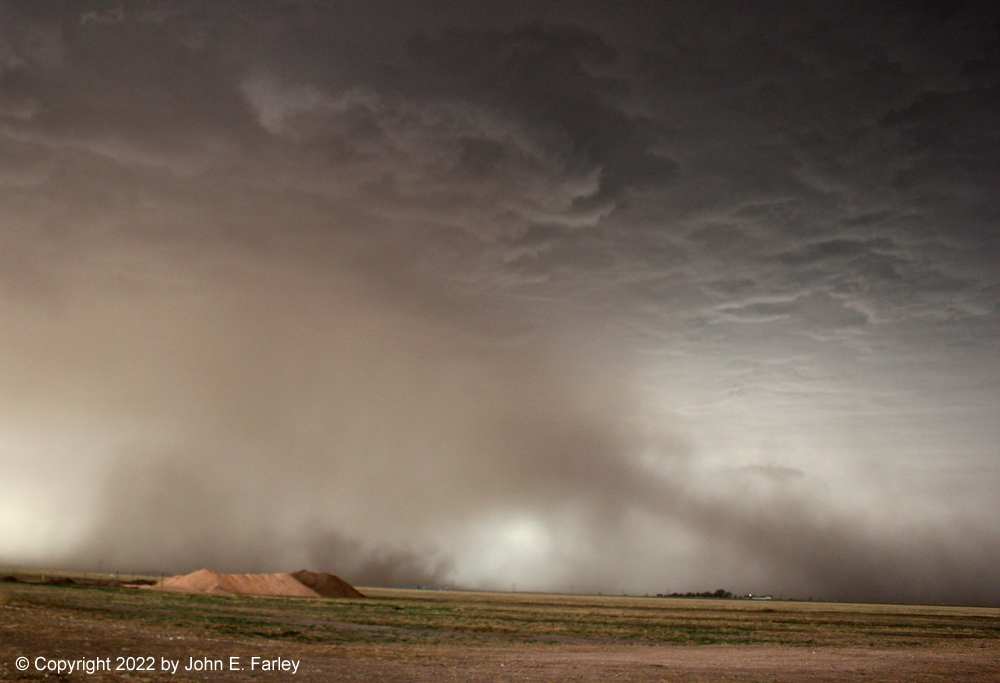 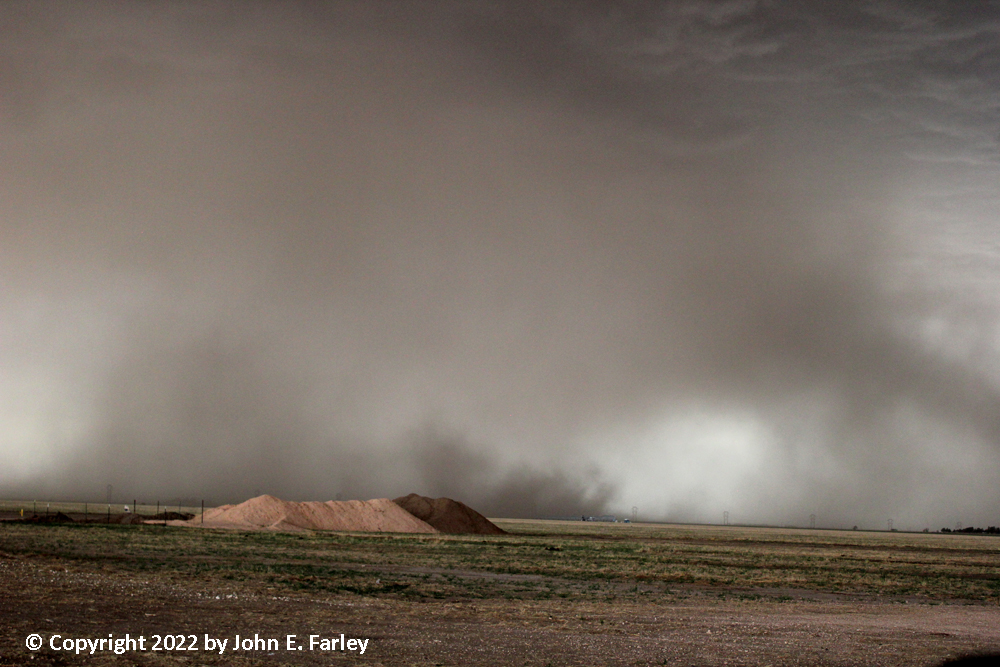 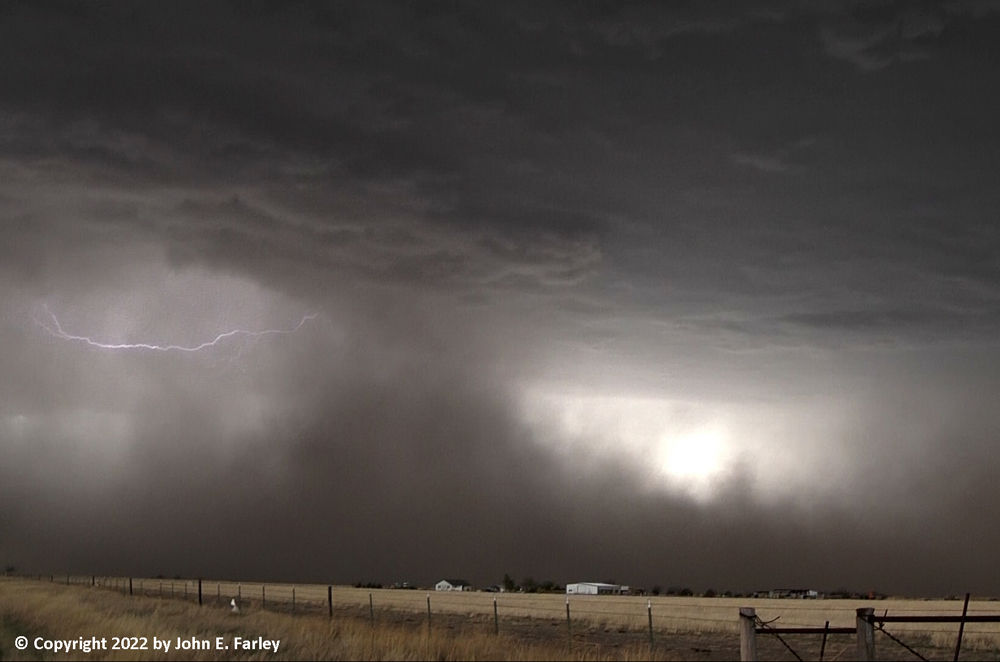 Meanwhile, golfball hail reports continue in the core of the storm to my north. I stay ahead of the storm east from here to Stinnet, watching the intense, dusty inflow at occasional stops ahead of the storm. 2 or 3 times as the storm gets closer, I get a few 1/3-1/2 inch hailstones, and shift east to get out of that.

7:30 CDT - I am in Stinnet. The storm has now backbuilt to the south side of 87 west of Stinnett. It is clear that Stinnet is going to be hit by the storm. It was, with reports of up to golfball size hail in the Stinnett area around 8 p.m. By now, I am getting word of an intense left split supercell surging NE from near Amarillo toward Stinnett, moving 55 mph. I think it might stay east of Borger, so I head south toward there. Figured if it was going to hit Borger, I mgiht be able to cut ESE toward Pampa from Borger and avoid it.

7:50 CDT - I get into Borger. I could see now there was no avoiding the storm, and warning updates mention baseball hail and 80 mph wind. Luckily, I find a Sonic with a roof abutting the north side of the building. Dinner time, with hail protection.

8:00 CDT - A heavy burst of hail, but not very big (1/3 inch?) and I am under the roof. Around this time, a brief landspout tornado apparently occurs in Fritch, about 15 miles to my west.

8:30-8:45 CDT - I wait for a final push of heavy precip to move through as the southern extent of the storm moves over Borger. A heavy burst of rain and a little more hail (pea-sized), some of which I get on video. Once that moves over, I find a room for the night.

Here is some video from this storm chase:

Chase distance for the day: 515 miles.