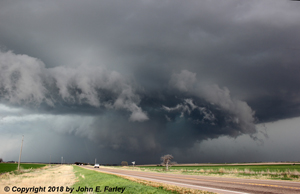 May 1, 2018 Central Kansas Chase
A monster tornado-warned supercell with hail to 4" and spectacular storm structure


Starting out from Sayre, OK, today's chase would require me to go farther north. A low would be emerging onto the high plains from somewhere around SE Colorado or the western OK Panhandle, moving into southwest Kansas. Extending to the ENE from the low would be a baroclinic zone, kind of a hybrid of a stalling cold front and an outflow boundary from convection earlier in Nebraska. Extending southward from the low somewhere in the eastern panhandles down into TX would be a dryline, which would shift east into KS and OK during the day. Capping would be an issue in TX and much of OK, with storms not at all certain to develop south of the KS/OK state line. So the plays would be along the stalled front/outflow boundary, the northern part of the dryline, and perhaps especially near the triple point where these two boundaries were connected. Moisture and instability would be better than the previous couple days, with dewpoints in the 60s and widespread CAPE in the 2000-3000 range, higher in some places. The best combination of instability and dynamics would be near and just south of the stalled front, but storms would be numerous and potentially messy and multicellular. The farther south along the dryline, on the other hand, the more capping would be an issue. Along with quite a few other chasers, I decided to try to play the triple point, where I could either go north to the storms along the front or south to ones along the dryline. I set an initial target of around St. John, KS, located between Pratt and Great Bend, and was on the road from Sayre around 10:30 or 11 a.m.

By the time I was around the Pratt, KS area, it looked evident that I would need to shift my target north a little, as storms were firing in a line a little south of the front, from WSW to ENE west and north of Great Bend. By around 4 p.m., chase strategy was becoming obvious, with an intense storm WSW of Great Bend. I headed WNW from Great Bend on 96. As I headed into Albert, the storm (Storm 1 herinafter), already SVR-warned, got its first TOR warning at 4:11 p.m. By around 4:15 or 4:20, I had a good view of the storm from a high spot on a gravel road a little SW of Albert. There were intermittent ragged, scuddy lowerings with some rotation in good contrast south of the precip, but a more solid lowering largely hidden in the rain. Here is a radar image and a couple pictures from this time/viewpoint: 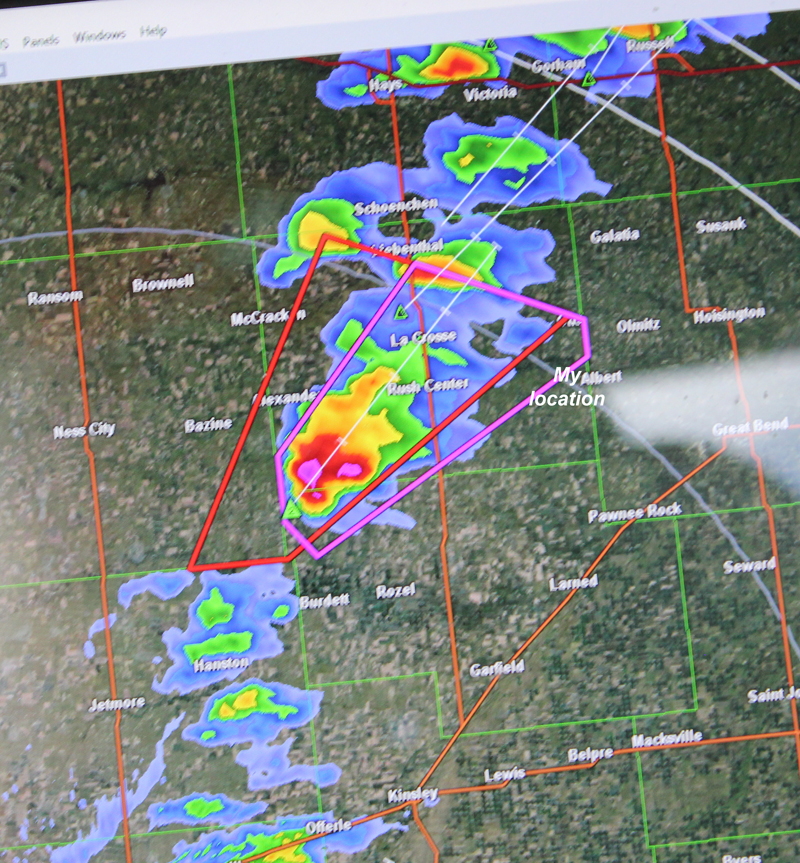 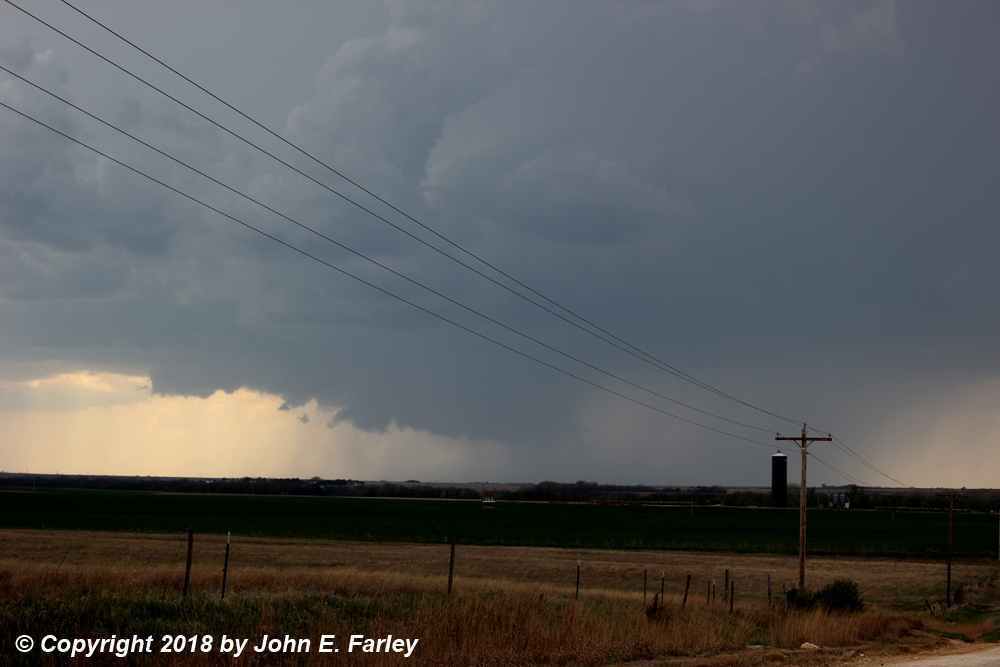 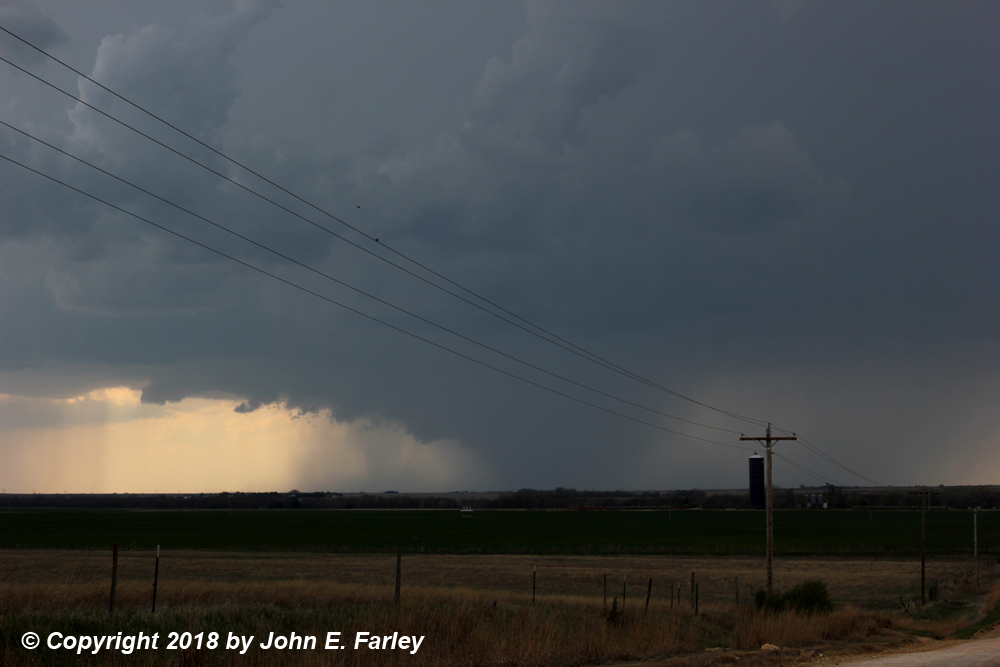 While at this location, I tripoded the video camera and got some video of the cloud rotation that was occurring:

I watched the storm from this location until around 5:05, then started working my way back east so it would not get ahead of me. As you can see from the pictures, this supercell was quickly becoming HP in character. At my first stop along the way, this was the view as the storm dropped 2.5 inch hail on Otis at 5:10: 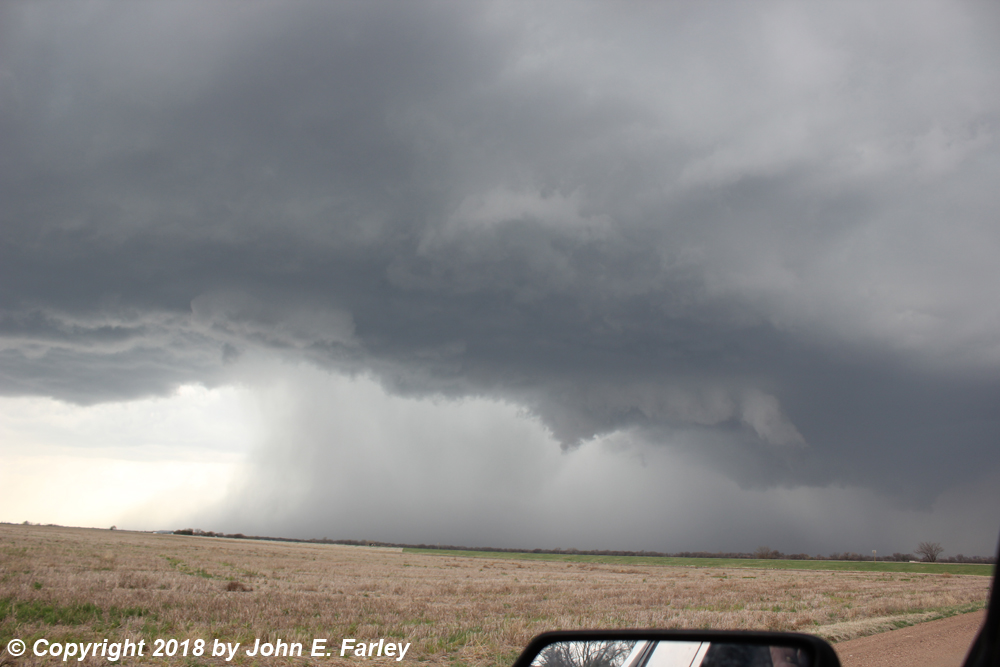 I headed back down 96 a bit, then east at Heiser and north on the blacktop road that runs north and continues into 81 4 miles WNW of Hoisington. Southwest of Hoisington, I see this looking northwest around 5:35: 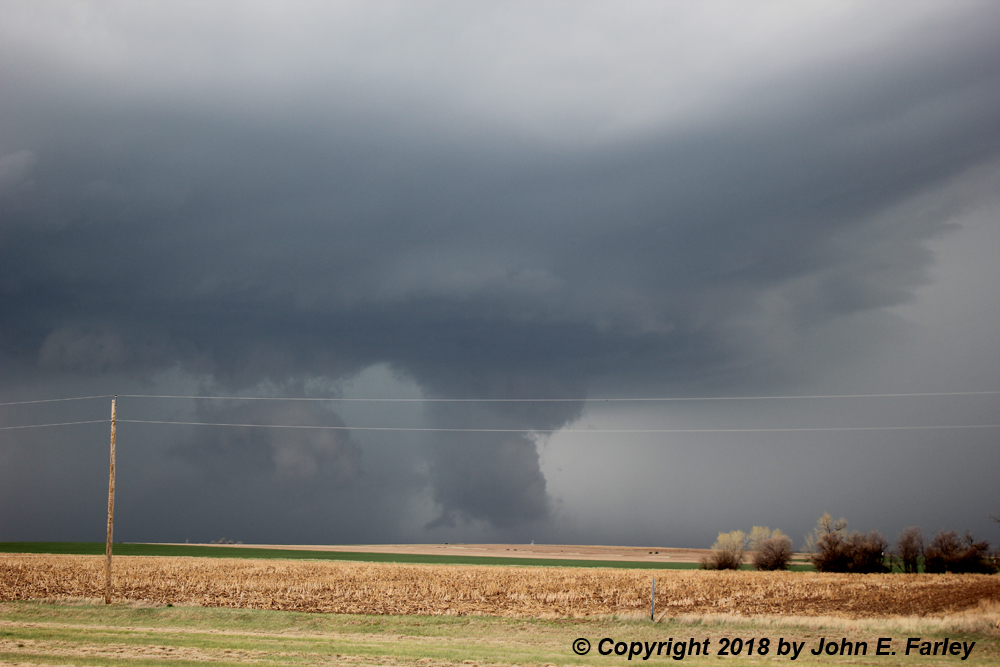 A minute or two later, a new TOR warning is issued for radar-incdicated circulation NW of Hoisington.

As I pursue the storm north, it continues to intensify, crosses route 81 a few miles ahead of me, and produces a large, low rotating wall cloud to my NE, as I watch from a side road just off 81 a few miles north of where I joined it. This location was NW of Hoisington and SW of Susank. Here is what I saw, almost exactly at the time the storm dropped 4-inch hail on Susank: 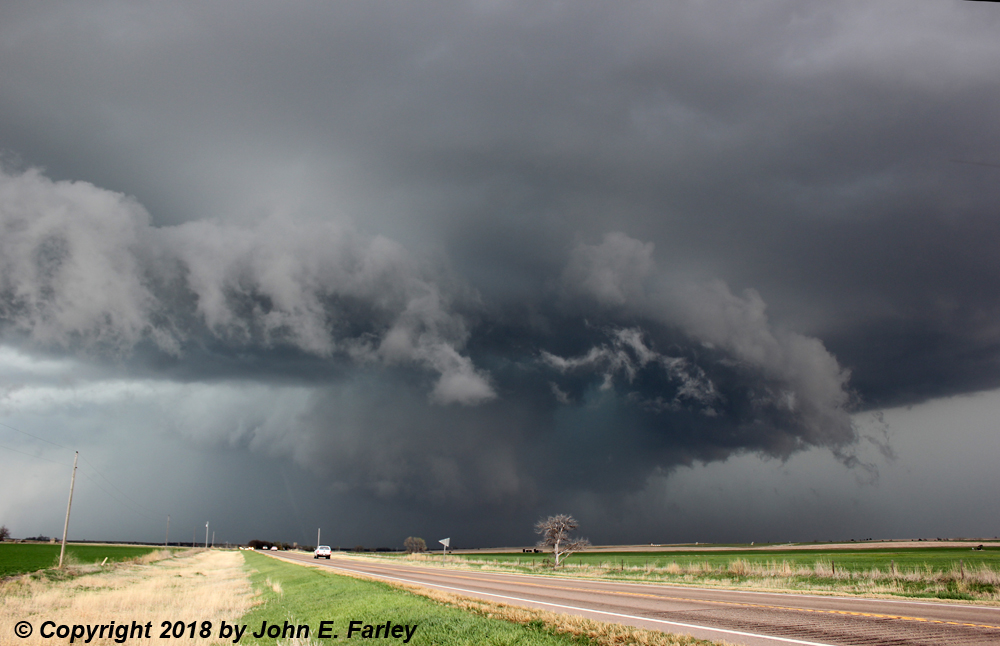 What more can I say than this is why we chase storms?!?

After this, however, things got more complicated. I turned east and, somewhere south or SSE of Susank, I saw a couple possible funnel clouds to my northeast. Here is a view from this location: 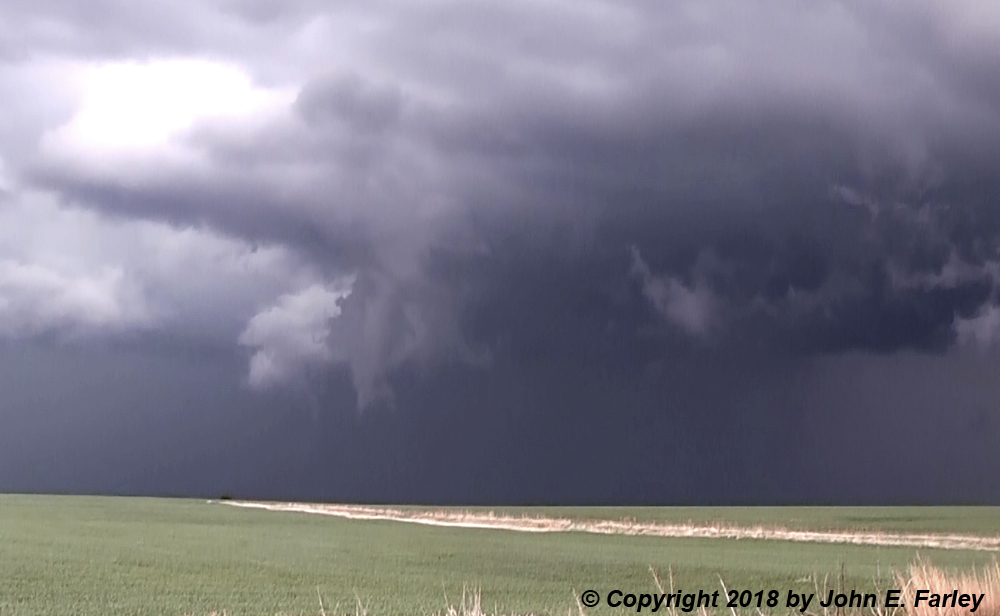 This would likely have been around 6:05 or 6:10 p.m. Around this time, the storm got a new TOR warning for radar-indicated circulation near Wilson, likely a little farther away than these possible funnels.

I tried to continue east to keep up with the eastward component of the storm's movement, but before long I was suddenly barraged with wind-driven hail from a small storm that was merging into the monster supercell to my north. Others have suggested, and my experience was consistent with this, that this storm was a left (anticyclonic) split from a storm somewhere to the south. The hail started out in the dime to nickel range, then increased in amount but decreased in size to about a half inch in diameter. It was driven by strong southeasterly wind. I saw other chasers, including one with a mesonet that I figured had better radar than I did, all bailing south, so I did the same. Before long the hail turned to just rain, then I ran out of it, but of course now I was well behind the storms. I circled west through Hoisington then back north to Susank, but by now the storm I had been chasing was well to my northeast, and getting messier with all the surrounding storms like the one that hailed on me. I did not think I could catch up and even if I did, my view would likely be blocked by all the other storms. The storm I had been chasing by now was one of many along a NE-SW line to that was located to my north and northwest. The tail-end storm, roughly to my west, was looking good, and I considered going after it. Here is a wide-angle picture of the tail-end storm, looking W from Susank: 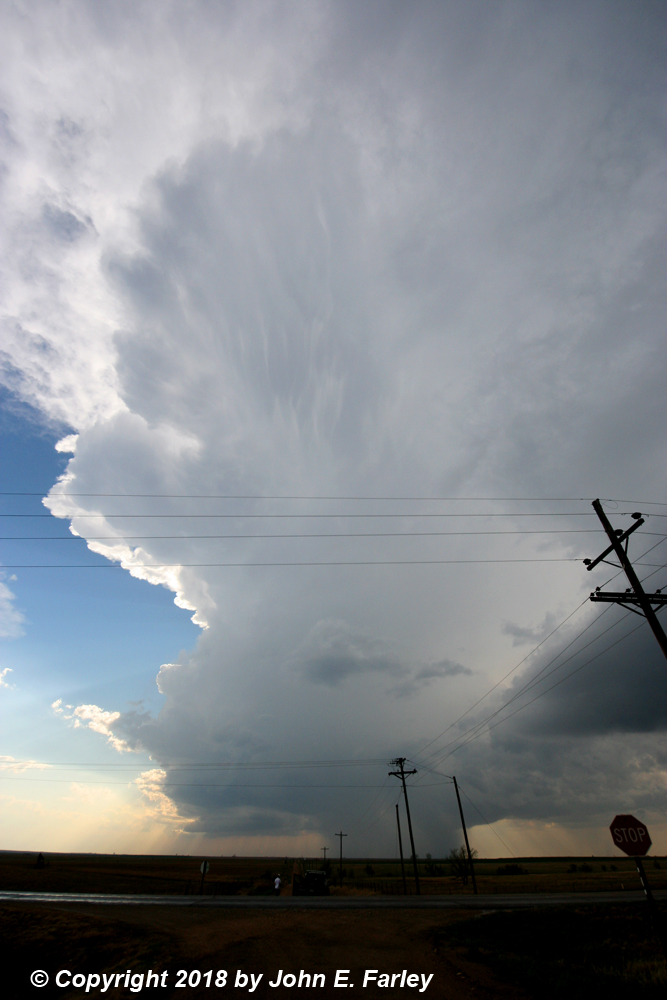 Might have been a good idea to go after this storm, since from what I hear both it and the one I had been chasing eventually produced tornadoes, including a photogenic (if you were in exactly the right place) wedge near Culver and Tescott, KS. But that was way northeast, well the other side of I-70, and 2 hours after the 4-inch hail in Susank. Between the messy storm mode and how far north I would have had to go (especially considering I would need to head southwest for the next day), I decided not to pursue either my Storm 1 or the new tail-end one farther northeast. Another factor in this decision was an isolated storm to the south that had been looking good both visually and on radar for the past hour or two. (Earlier, north of Greensburg, this storm had such a classic hook echo that I was sure it must have been producing a tornado. Apparently, it did not, however.) I figured that, being more isolated and to the southeast of the other storms, it would have both less impeded moist inflow and less interference from other storms, and I could still probably catch it if I did not wait around too much longer. So I left the storms to my north that eventually produced multiple tornadoes (which of course I did not know would happen at the time), and headed for the storm to my south that I hoped might offer me up something interesting. In hindsight, this was not the best choice. The storms to the north later reintensified, became more discrete, and became tornadic, thanks to the influence of the lower level jet (LLJ). I was aware of the forecast for an increased LLJ toward sunset, but was thinking it might affect the more isolated storm to my south as well. As it turned out, that did not happen, or other factors, such as perhaps the storm getting too far from the dryline when the dryline's eastward movement waned toward sunset (again as forecast), and even more so when the "sloshing dryline" again retreated to the west in the evening, as it had done each of the previous days. Still, I did get some pretty views of the southern storm, like this one as I was heading south toward it while it was still looking good. and since the tornadoes with the northern storms were rain-wrapped much of the time, there is no guarantee I would have seen them. So although in hindsight I probably would have done something different at this point, my decision to pursue the southern storm does not bother me all that much - and I surely would have ended up farther north and east than I wanted to had I stuck with the northern storms.

I went south on 281 to the paved road that is the eastward extension of route 19 where it meets 281 just east of Seward, and turned east onto that road. The storm (Storm 2) was to my east, about to cross the road. I drove toward it, getting this picture looking at it almost directly to my east, as it moved to the ENE: 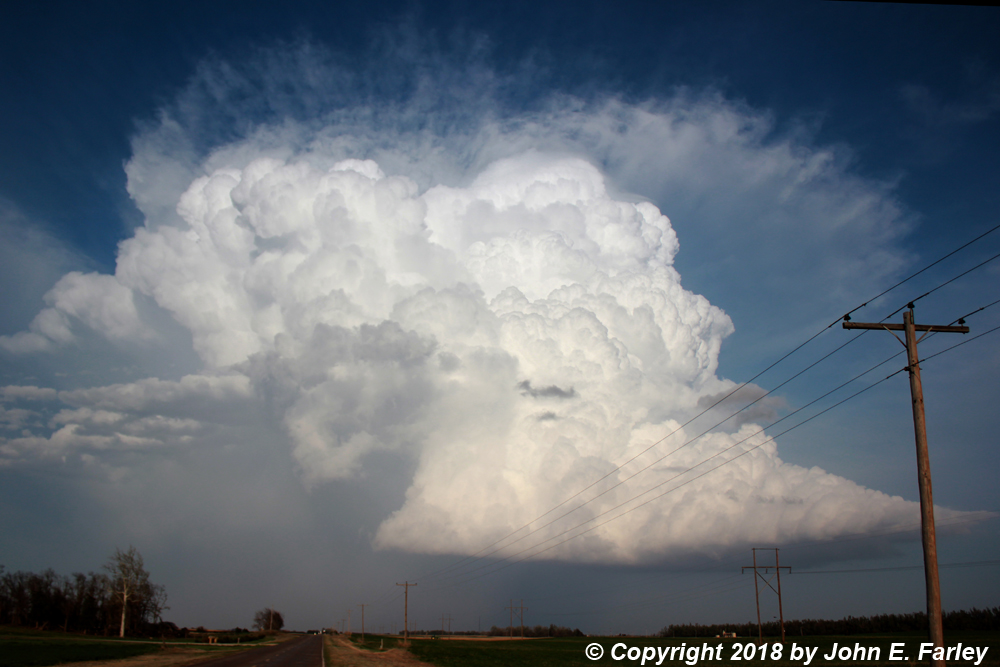 Around this time, this storm got another SVR warning, its final one of the numerous warnings it got over the course of the day. However, the storm was becoming more LP in character, and gradually weakening. Once it was north of the road I was on I crossed just to its south and got ahead of it as it continued moving to the ENE. But it was now obvious that it was weakening and was not going to do anything more, so I called it a chase and headed for Hutchinson for the night. By the time I got there, I could see that my Storm 2 had completely dissipated, while the now-distant storms to the north were obviously going strong.

Here is a map showing my route for the day and where I viewed the storms: Chase distance for the day: Approximately 450 miles. (Does not include another 13 miles or so driving around in Hutchinson trying to find places to stay the night and to eat.)