With a dryline setting up across eastern NM, dewpoints were progged to be around 50 or a litle higher east of the dryline, with CAPE of 1000-1500 expected east of the dryline. Models were consistent in breaking out storms in eastern NM, with the strongest and most persistent storms expected in far eastern NM, in the warm more moist sector east of the dryline, a bit ahead of the initial storms right on the dryline. Directional shear would be decent, though weak upper winds were expected. The storms that initiated in far east NM were projected to move in to TX, likely ending up to the E or SE of Amarillo by sunset. I left around 11:30 with initial target of somewhere between San Jon, NM and Amarillo, TX.

I did indeed encounter storms right along the dryline and eastward. By the time I stopped for gas in Santa Rosa, there were storms in the area, but they were high-based and looked pretty moisture-starved. I decided to stick with my plan of going after storms farther east, where the HRR was predicting stronger storms would eventually go up. As I was between Santa Rosa and Tucumcari, I could see that the storms right on the dryline were strengthening, but I could also see a new towering cumulus going up rapidly farther east, perhaps somewhere near Clovis. Soon this glaciated and another went up right next to it, and I decided this would be the storms I would go after. To intercept them, I would need to go south from San Jon, Bard, or Endee. I decided I would be too far behind the storm if I dropped south at San Jon (but that is where the road is best, so maybe I should have), and as it turns out I headed south from Endee, right near the TX state line. Here is a time-by-time account of the active phase of the chase:

3:00 NM time - I am headed south from Endee on NM state highway 93, which unfortunately is unpaved for 16+ miles, toward the supercell storms. It is amazing what passes for a state highway in NM! The closer storm to me was north of Clovis. Here is a view of that storm as I headed south toward it: 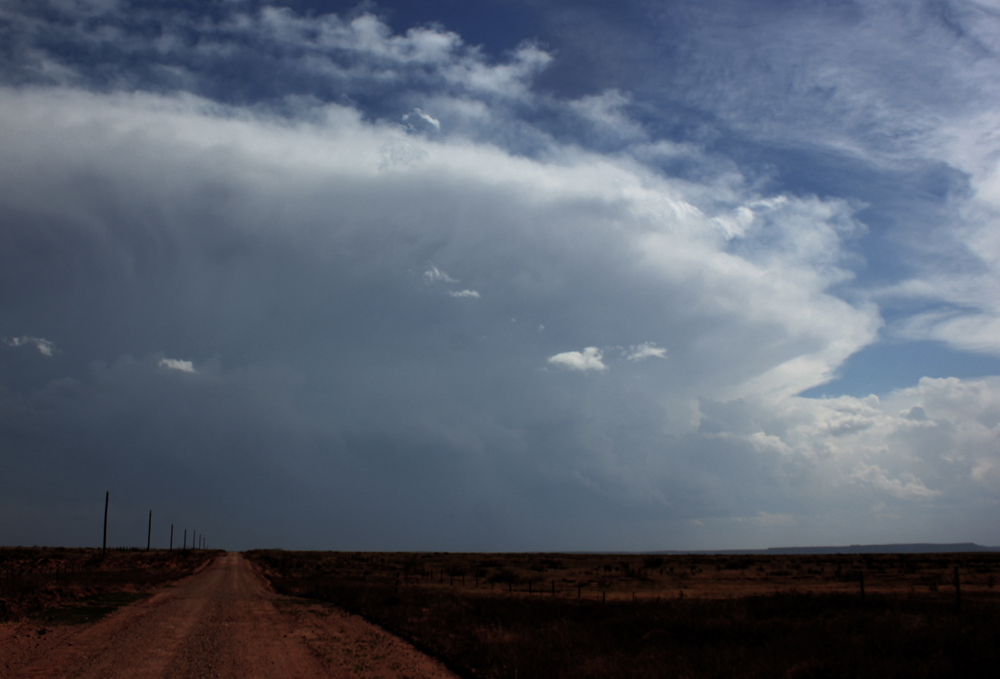 3:30 NM time - I arrive in Bellview, NM and watch ths storm for a while before heading east. This storm is the northernmost of two storms and has the appearance of supercell character at this time, although both of the storms were high-based as supercells go. The other storm south of it, roughly over Clovis, appears less organized at 3:30, but after that rapidly intensifies, takes on supercell character, and becomes the dominant storm of the two. From this time on for the next hour or so, large hail is reported in and around Clovis - 1-2 inch hail, and piled deep in places. From Bellview, I photograph what may have been a brief mid-level funnel to my WSW on the NW edge of the northern storm. However, it dissipated quickly and I am not 100 percent sure it was a funnel - it may have been narrow scud - but it had the look for a while. Here is a radar image from around this time: 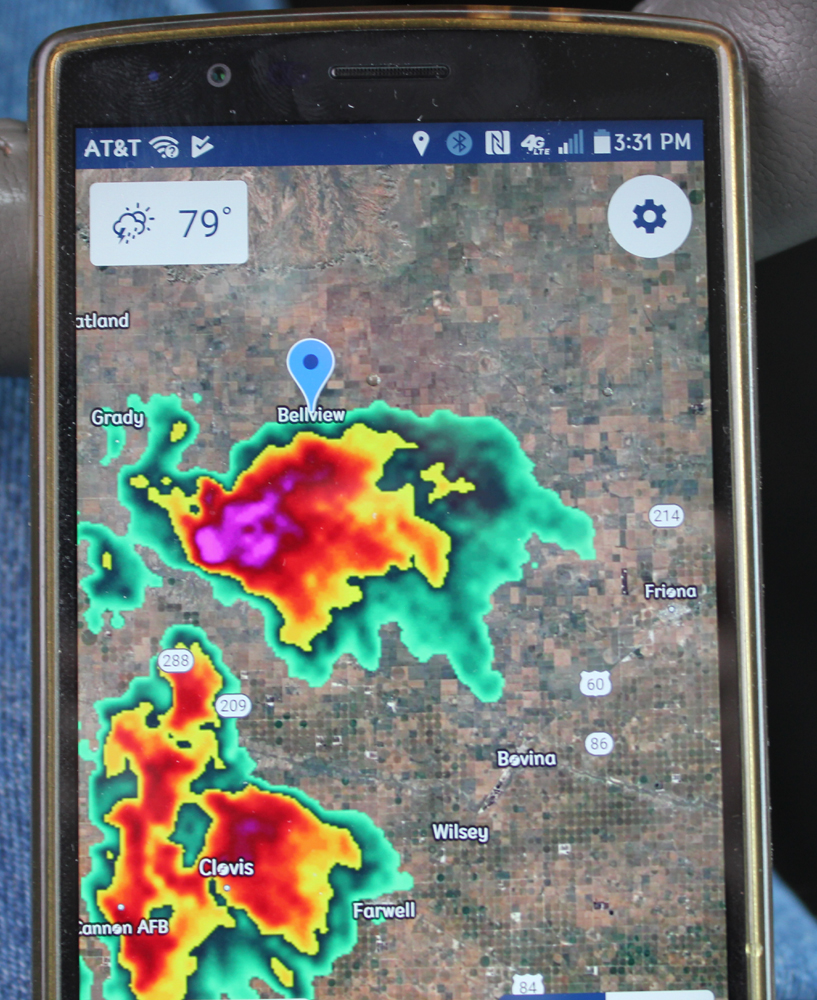 Here is a picture of the possible funnel:

5:00 TX time (4:00 NM time) - I head east into TX on MM 241/TX 1038. Several miles into TX, two plumes of smoke appear to the south, likely from wildfires resulting from lightning strikes. Numerous strikes are occurring from the anvil to the ground NE of the cores of the two storms, which share a common anvil extending well to the NE. These are likely positive bolts. The ones that started the fire and other CG strikes that were closer to me were likely associated with the northern of the two supercells.

5:10 - I turn south toward Friona. I phtograph mammatus, then after a while can see flames from the fires. I stop with a couple chase tour vans (Extreme Tornado Tours) to watch the flames, now being fanned by the strong wind around the thunderstorms. The location of the fires is NW of Friona, SE of Bellview, NM. Here is a picture of the mammatus: 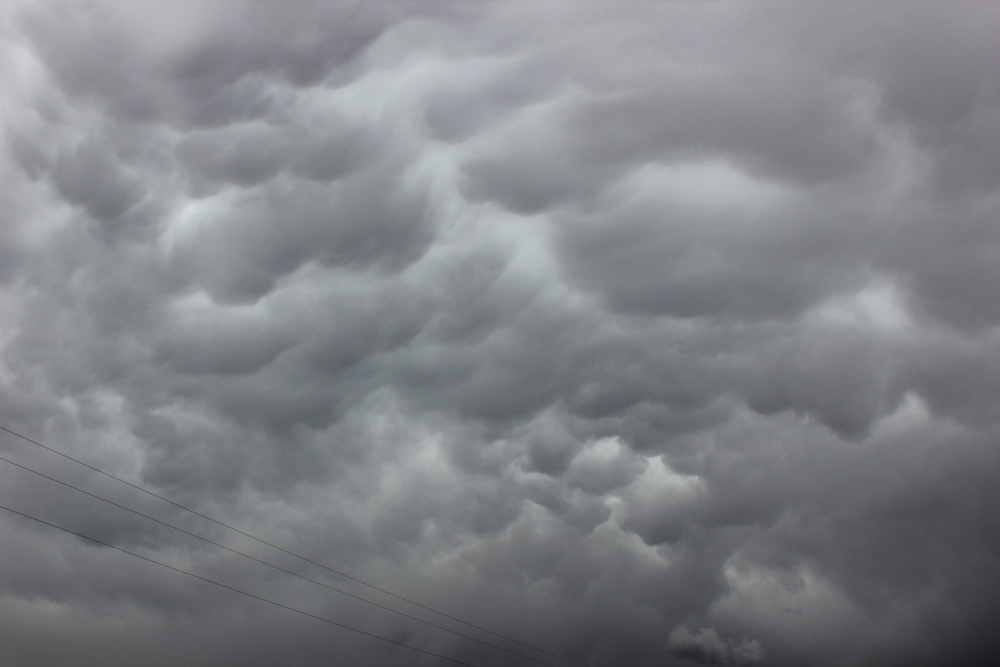 Here is a video capture of the fires, which were around five miles from my location at this time. This was probably around fifteen minutes after I first noticed the smoke from the fires: 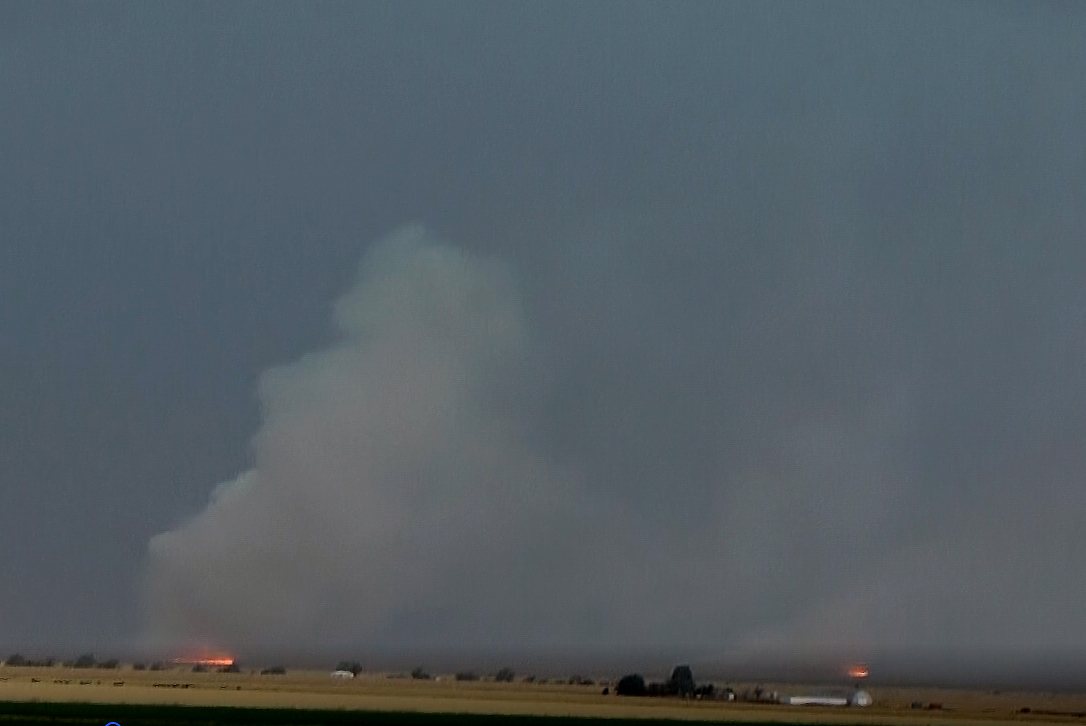 As I got ready to move south to try to get more in front of the storms, two fire units passed, heading for the fires. A later LSR from the NWS in Lubbock confirmed that the fires were started by lightning.

5:20-5:45 - Just north of Friona I photograph a wall cloud, in the distance off to my southwest. The wall cloud never extended real low from the cloud base, but at this time it was more than I could see at most times. Here is a picture: 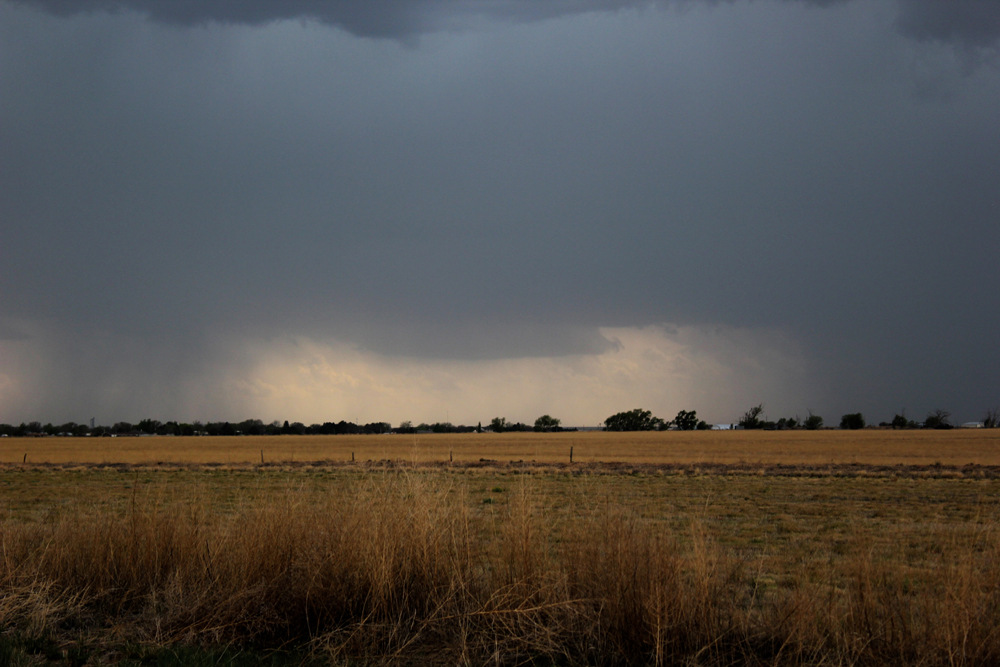 I pass through Friona and stop south of there to watch the storm. There is lots of blowing dust along a gust front moving toward me from the SW, and I see what appear to be couple distant gustnadoes along the gust front. Also the smoke from the fires to my NW is being blown hard and close to the ground by the outflow winds: 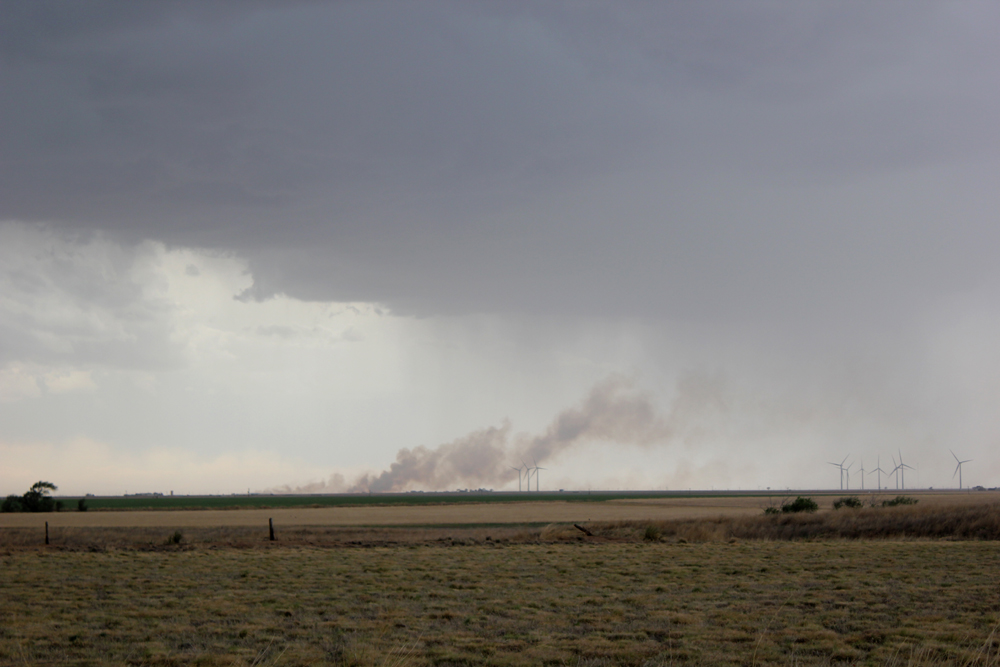 At this time, the storm was quite electrified: 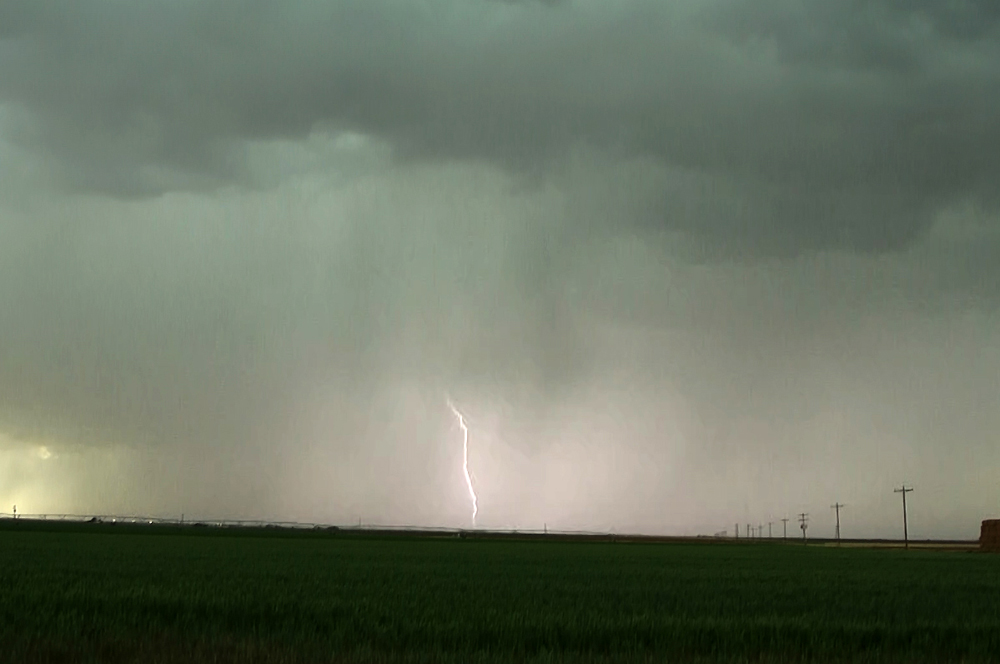 5:45-6:00 - As I am repositioning after the leading edge of the gust front passes over, a strong gustnado develops in a field 1/2 mile or less to my NNW. I quickly grab my video camera, roll down the window and try to get video, but am unsuccessful - I guess I just missed the record button. It all happened too fast. This is the closest I have ever been to a gustnado that strong! I also saw a few other gustnadoes before and after this one, but they were all much farther away. This nearby, intense gustnado was definitely the highlight of this day's chase! I am disappointed I did not manage to get video, but the important thing is, I saw it!

6:00-6:45 - I watch the storm from a couple locations between Bovina and Lazbuddie along route 214, as it continues to get new warnings, and blows up another gustnado or two and some large dust plumes. The storms are now gradually evolving upscale into an MCS. Around 6:45 I decide to call the chase and work NE toward Amarillo. The storms developing along the flanking line rapidly intensified, got a new SVR warning, and dropped hail - had I stayed where I was another five or ten minutes, I would have been in the hail, so leaving was a good choice.

7:15 - I encounter heavy rain and close lightning strikes but no hail just to the WSW of Canyon, TX.

Here is a short video clip showing the fires and one of the larger dust plumes from outflow wind that I observed:

Here is a map showing the route of the active part of my chase today: 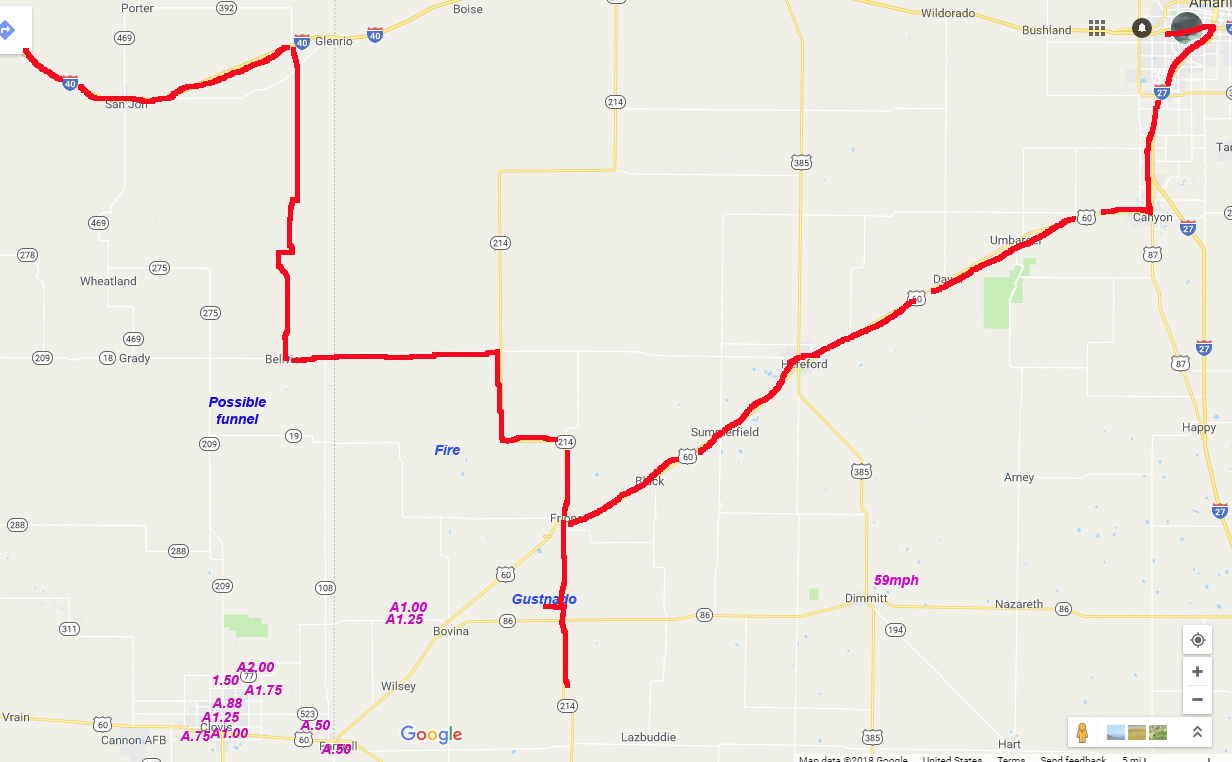