I managed to keep up with a pretty little storm today for about 50 miles as it moved rapidly northeastward from near Worden, IL to Coalton, IL (near Nakomis). This was a day that had some, but not a lot, of potential for tornadic storms, as a cold front moved across central and southern IL from a low tracking northeastward from the west-central part of the state. The potential was a little better than it had looked the night before because the front and the storms ahead of it had moved more slowly than expected, remaining west of the St. Louis area through the morning. Initially it had looked like the best clearing and return of instability would be in far southern and eastern IL, and this is where I thought in the morning that I would be heading if I chased storms today. However, the slower movement of the front allowed such clearing and destabilization to occur across most of the southern and central part of the state - and the chance for discrete and potentially rotationg storms seemed better farther north closer to the warm front than to the south, where the advancing cold front would quickly force the storms into a squall line. By around 1 p.m. the radar was verifying this, with storms lined out to the soutwest of St. Louis but more discrete just west and northwest of the metro area.

I decided to break away from working on my taxes for a while (don't need much excuse for that!) and try to see if I could intercept a storm somewhere near Litchfield. Finally getting under way following a gas stop around 1:30, I noticed a decent-looking storm just northwest of Edwardsville, and headed up I-55 to the route 4 exit where I stopped to watch the storm for a few minutes. It was sheared over nicely to the northeast, and had a small and somewhat ragged lowering under the updraft. It also had a hail marker on GRLevel 3 radar - which it would for the whole time I ended up chasing it, usually 1/2 inch to 1 inch. I planned to stop again at the Mt. Olive exit, but it was too darned wooded there so I had to continue on to Litchfield. By now the storm had developed a nice wall cloud, which looked its best when I hit some clear spots halfway between Mt. Olive and Litchfield - but since I was blasting up the freeway in quite a bit of traffic, I could not get any pictures. But at that time, it was a solid, very low wall cloud, with a nice inflow tail. By the time I could get some pictures and video at the west edge of Litchfield, the wall cloud had become a little less organized, but there was still a lot of CG lightning: 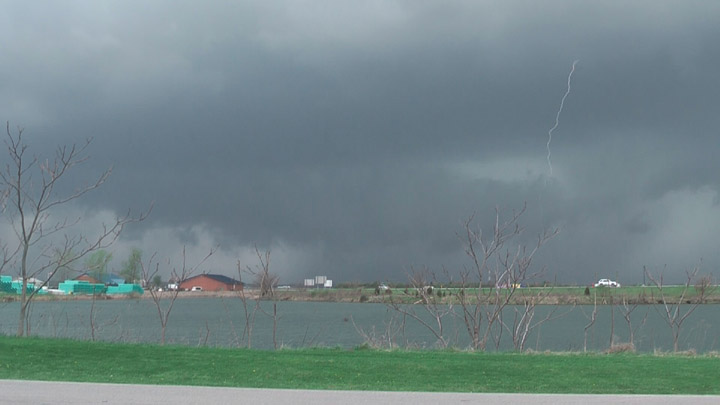 Around this time I was pleased to find out that I was in a tornado watch, but there was a problem - the storm was starting to get seeded by the linear storms to its south, and the space between my storm and the line to the south was rapidly decreasing. Since the storm was about to move right over Litchfield, I headed a bit east of town and stopped again, where the wall cloud was again looking pretty good: 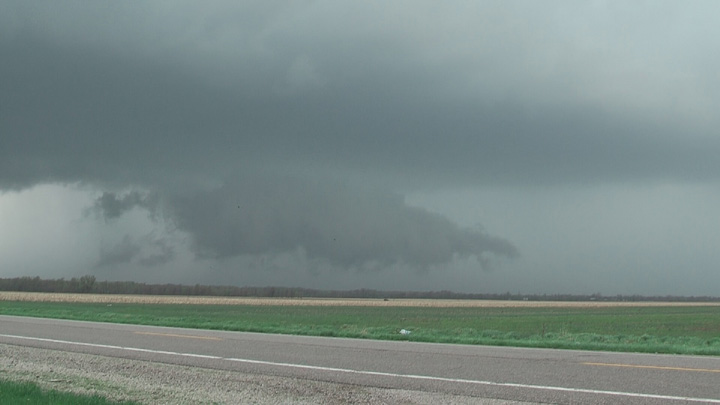 Unfortunately from a storm observation standpoint, this was as good as it would look the rest of the way. The gap between my storm and the line of storms to its south was rapidly filling in, and a transition was occurring to a linear structure that would make the storm harder to chase and less likely to produce a tornado. The wall cloud was beginning to take on more of an appearance of a hybrid between a wall cloud and a shelf cloud, as precipitation began to fill in what had become a narrow gap between my storm and the ones to the south: 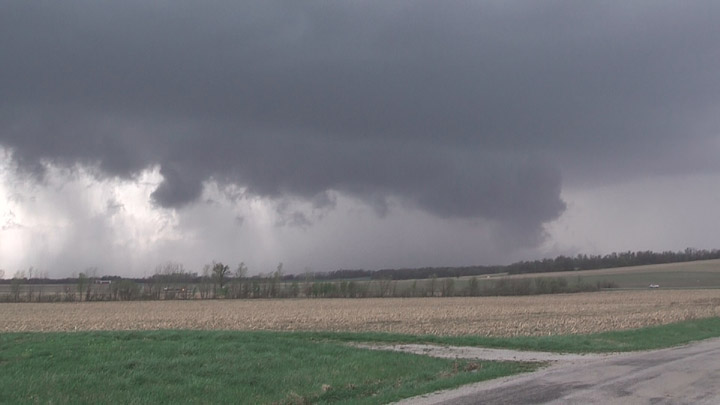 The picture above was taken about midway between Litchfield and Hillsboro. A zoomed view of the small remaining precipitation-free area as it filled in, and the ragged cloud base above it, can be seen here. Here is a more zoomed view of the main lowering, which was again pretty close to the ground, but getting more engulfed in rain: 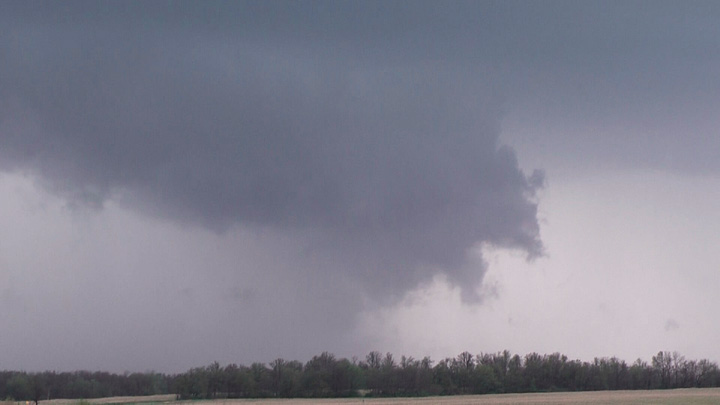 By this time, the line of storms to my south had evolved into a bow echo, moving roughly ENE along I-70. I considered blasting southeast from Hillsboro to intercept the bow echo, which soon went SVR-warned, but I didn't think I could get very far without getting overrun, and bow echos, despite their severity and occasional potential to produce tornadoes, are just too darned hard to chase, in part because of their tendency to surge forward at rapid speeds, which this one did. Instead, I headed northeast toward Pana, and was able to stay with my storm as far as Coalton, near Nakomis in northeastern Montgomery County. By now, the linear storms had merged with the one I was chasing, and the storm had positioned itself at a distinct kink in the line, an example of what is referred to by meteorologists as a LEWP (line-echo wave pattern). This spot can occasionally produce tornadoes, so I stayed with the storm as far as I could. But as the line of storms to my southwest began more and more to merge in with and take on the shape of the bow echo farther south, it was a matter of time before I would be overrun. A lowering of sorts persisted continuously from the time I first saw the storm near Worden all the say up to Coalton where I finally gave up and let the storm move over me. However, the last 10 or 15 miles it was notably more scuddy and broken up and not as well organized as earlier. This less organized structure can be seen in this picture that I took near Whitt. I found a nice open spot on a side road just west of Coalton where there were no trees or wires, and let the storm move over me, as it would have done in a few minutes more anyway. I got very heavy rain, wind I would estimate at 40-50 mph, and a little pea-sized hail. Not a bad outing for so little driving. I was back working on taxes again by 4:30.