Beginning during the day on Easter Sunday, April 4, a long-track supercell developed west of Kansas City, MO and moved across the entire state of Missouri, eventually crossing into west-central Illinois during the evening. I got some pictures and video of "anvil-crawler" lightning associated with this supercell, looking northwest across Dunlap Lake in Edwardsville. At this time, around 9:40 p.m., the core of the supercell was about 30 miles to my NW, though some of the lightning in the anvil was closer - I was by this time hearing occasional distant rumbles of thunder. Here is a picture of some of the anvil-crawler lightning: 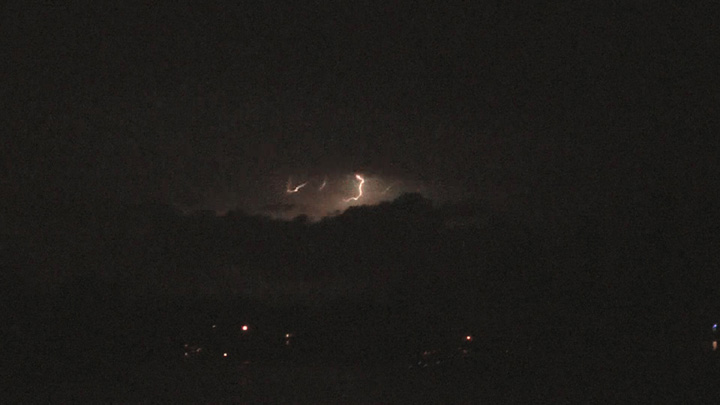 A short Youtube video of the lightning can be seen at:

I had thought about chasing around 2:00 p.m., when I noticed that the RUC model was forecasting a good combination of instability and wind shear 50 miles or so north of Columbia, MO around or shortly after sunset. But I had too much to do, and the window of opportunity for seeing a storm in daylight seemed too small per this forecast. By around 3:00 p.m., a storm had gone up west of Kansas City, MO, and soon a cluster of several storms was active in that area. One of them developed into a supercell and moved all the way across Missouri, producing at least two tornadoes - one in that was on the ground for 2-3 miles in Randolph County, MO around 7 p.m., and at least one more an hour later in Audrain County, MO. The first of the two was within about 20 miles of where I would have targeted had I opted to chase.

Although storms behind this supercell lined out, the supercell stayed ahead of the line and crossed into Pike and Jersey Counties, IL, still tornado-warned. When it pulsed up again as it was crossing into Macoupin County, I decided to do something I usually do not do - chase the storm at night. I don't generally regard night chasing as safe, but since this storm had stayed isolated and on the same eastward track so consistently over many hours, I thought I could chase it safely if I stayed a reasonable distance away. As it turned out, I found the chase difficult, partly because I left in too big a hurry and left behind several things I could have used, and partly because in the dark it was hard to navigate and to find a spot with a clear view, or even tell whether any given spot HAD a clear view. Also, within a block of home, I sent both my computer and video camera flying when I hit the brakes to avoid a muskrat crossing the road in front of me. Luckily, no damage to either (or to the muskrat, which I narrowly avoided), but it was a reminder that animals that are hard to see until the last minute are a real hazard of night chasing. Nonetheless, I did get a decent view of both anvil-crawler and cloud-to-ground (CG) lightning from Route 4 just east of Worden, IL, at that time about 10 miles from the storm: 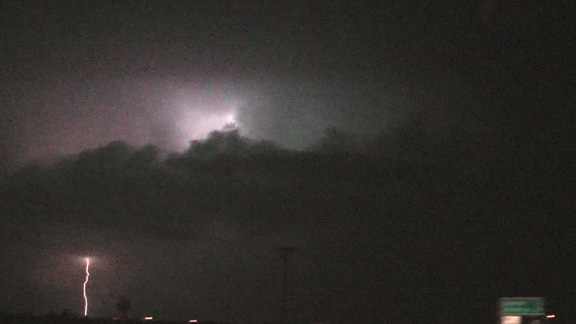 The CG lightning in this picture was well out ahead of the main core of the storm, to my northwest in southern Macoupin County. So I continued northward on old route 66, eventually getting a decent view of the core of the what I thought was the same storm, with a lot of CG lightning, from a little north of Mt. Olive. (Actually, this was a second supercell; see edit below.) Here is a picture of lightning in the core: 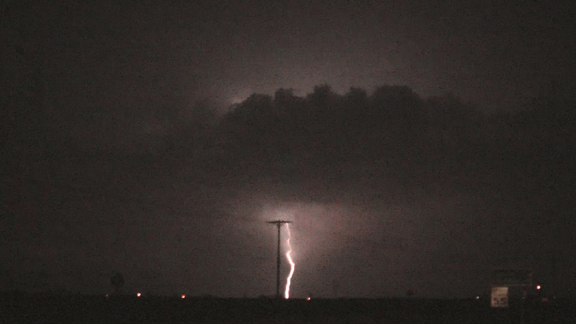 The meso was to the left of where most of the lightning is occuring, i.e. somewhere near the left edge of the video frame. There may have been a slight lowering there, but there was nothing visible that I would call a wall cloud. However, storm-scale rotation continued for a while, as the storm continued to get new tornado warnings eastward through Litchfield and into Fayette County. In fact, a total of six TOR warnings were issued for various parts of Macoupin County between about 10 and 11:30 p.m. When I got to Litchfield, the storm was getting ahead of me and I could see no structure of interest to my west, so I decided to end the chase and head home. Although I did not see anything approaching a tornado, it was still nice to get out and see such a long-track supercell on the first chase of the spring, and the lightning was definitely something to behold.

EDIT - After reviewing a radar loop from 9-11 p.m., I now realize that I what went on was a little different than what I thought from what I saw visually. The long-track supercell is what I was seeing in the first two pictures above, and in the first video linked above. But in the third picture and in the second (embedded) video, I was looking at a second supercell that developed within the line and became a right-mover, tracking southeast through Macoupin County. It is this storm that produced the wind and hail near Carlinville. At the time of the second picture, taken near Bunker Hill, I was closer to the storm than I thought, perhaps about 10 miles. A factor that added to my confusion was that, in my rush to leave, I took the computer but not the aircard, so my radar of course did not work. Kind of interesting to see now what really happened, not exactly what I thought happened. In the daytime it would have been easy to tell that these were two separate storms, but at night, it was not so easy. This, of course, also explains why there were so many tornado warnings for Macoupin County, as there were two storms, not one, that triggered the warnings.