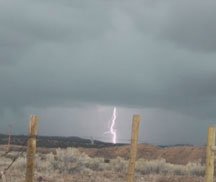 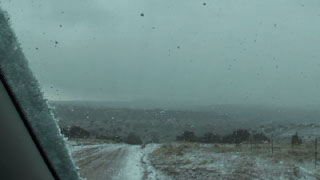 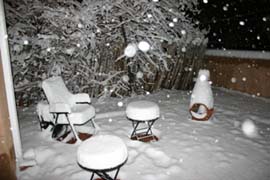 
Today was my first actual chase of 2010, and it was a good one. I started the day with two objectives. First, I wanted to try out my new HD video camera, a Panasonic HDC-HS300, which arrived a few days ago. Second, I wanted to get video of lightning and thunder associated with thundersnow, which I had never succeeded at doing before today, but thought I had a chance for today. I succeeded on both counts!

I was watching the weather closely today, as a decent chance of thundersnow was in the forcast as a strong low pressure system, quite tightly wrapped up, would track southeast across New Mexico, passing to the west of Santa Fe and thus creating the best dynamics somewhere near Santa Fe. Through the morning, light snowshowers moved over the area, but it was evident that some heating from the afternoon sun would be needed to get convection strong enough for thundersnow going. Shortly after 2 p.m., I noticed that the rain and snow showers which had been tracking northeast through the general Albuquerque area were intensifying. I noticed an especially strong cell just west of the Kewa (formerly Santo Domingo) Pueblo, moving northeast just to the west of I-25, and I knew it was time to go. Between the afternoon sun, the approaching low, and the fact that the cell was approaching the higher terrain of La Bajada Hill, I knew this cell, already strong, had a definite chance to intensify and give me some thunder and lightning, even though none was showing up on the lightning detector on Weathertap. Also, the upper air and surface temperatures were cold enough, despite the heating of the afternoon sun, to keep the precipitation mainly snow or graupel (snow pellets), especially once it got to the top of La Bajada Hill, but maybe even in the Rio Grande River valley where the storm was then. Time to head out!

As soon as I could get a good view of the line of storms as I headed southwest down NM 599 (the Santa Fe bypass), I could see lightning, and fairly frequent lightning at that, both in-cloud and cloud-to-ground (CG). My original plan was to head down I-25 and intercept the storms near the top of La Bajada Hill, but with the storms moving rather quickly toward the NNE, I thought trying to go more west and less southwest would be better, so I turned west at Airport Road and continued out the extension of Airport Rd. past the airport. However, the road turned to the southwest, so I kind of ended up in the same area anyway. A mile or two southwest of the airport, I stopped to video, and was lucky enough to get a flash of CG lightning. Here is a video capture: 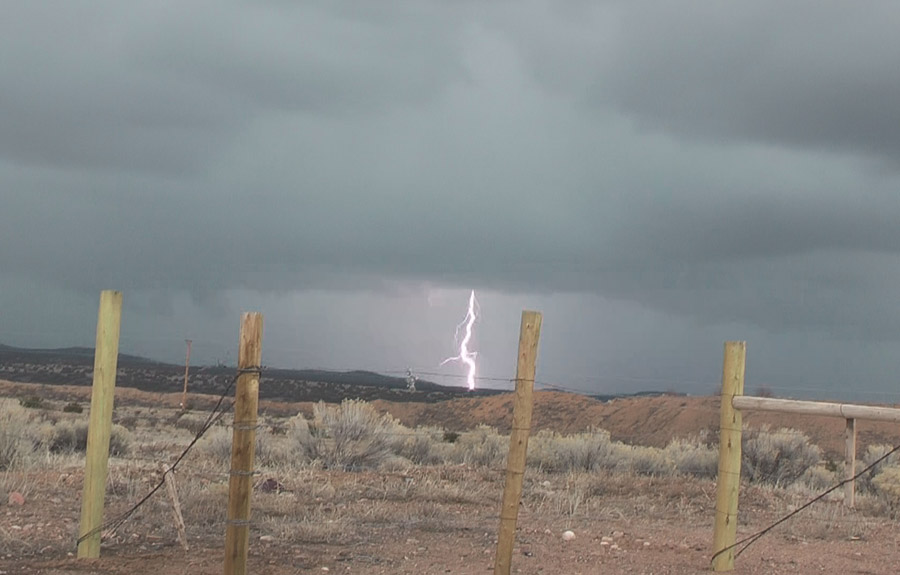 As I noted above, I had never before captured an image of lightning associated with snow, so when I saw this I was a VERY happy camper! The line of storms was quite intense, considering that the surface temperature at this time was only 43 degrees. And one part of the line actually had a structure that resembled an HP supercell imbedded in the line, although I have no idea whether that actually was the case. Here is what it looked like: 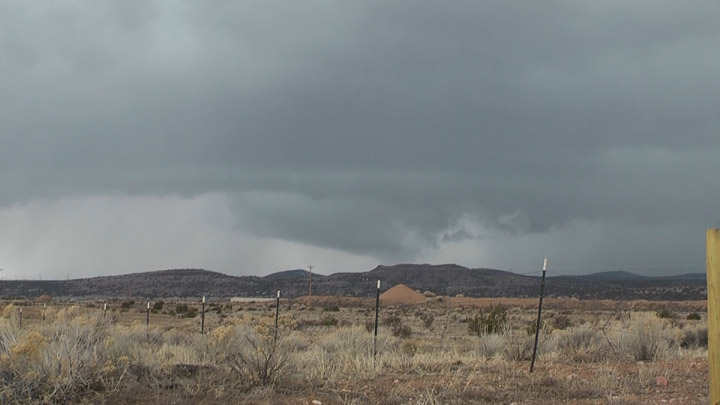 I could not see anything I could definitively call rotation in this lowered area, but there was definitely shear and upward motion, and the lowered area was quite persistent. Note also the striations and what even looks a little like an RFD cut ahead of the lowering - not sure if it was, but it kind of had the look. However, checking the radar archives the next day, I could not see any indication of rotation, thoough the reflectivity shows better than 55 dbz. I moved down to a spot near Canon, and got another CG on video. Then I went a couple miles further, to a high spot just north of La Cienega, to get in the precipitation. There, I encountered a heavy burst of graupel (snow pellets), which after a while mixed with ordinary snow. Here is a youtube video showing the CG strike near Canon (about a mile and a half from me), and a mix of snow and graupel falling at the location just north of La Cienega:

Incidentally, although the HD video looked great when I played it back directly from the camera on the TV, my computer is not quite fully up to HD video, so to edit I had to save it to regular mpeg - hence the video here is not as sharp as what I got on direct playback - but still not bad. Have managed now to get the captures to HD quality, though. Anyway, here are a couple images of the graupel and snow near La Cienega: 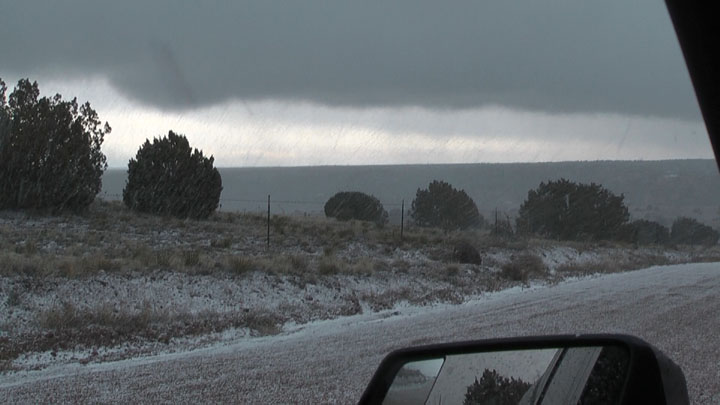 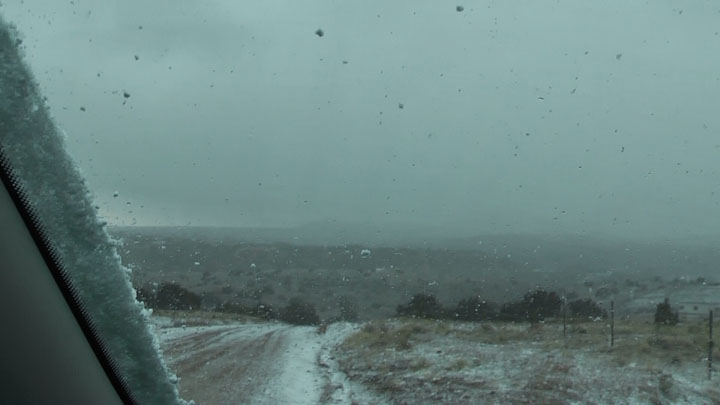 The storm at this time was strong enough that the ABQ Nws put out a special weather statement on it, mentioning the possibilty of sleet, hail, and extremely restricted visibility from heavy snow. For the record, I did not observe any sleet or hail, just graupel and snow. However, some of the snow pellets were rather large, at least 1/4 inch in diameter, and maybe bigger. And I was not in the strongest part of the storm, so there certainly could have been hail somewhere. Once I got into the area of precipitation, I did not observe any more lightning; the strongest cell where the lightning was occuring continued north, passing between Los Alamos and Espanola.

Figuring I would get into some bad driving conditions if I lingered much longer, I continued through La Cienega and got on I-25 to head back to Santa Fe. I got back ahead of the precipitation, and as I got into Santa Fe I observed some interesting structure along the leading edge of the precipitation. Shortly after this, it began to snow, and as of 11:30 p.m., 8 hours later, it was still snowing, with an accumulation of 7 inches. Here is a picture from around 10 p.m., with 6 inches or so then: 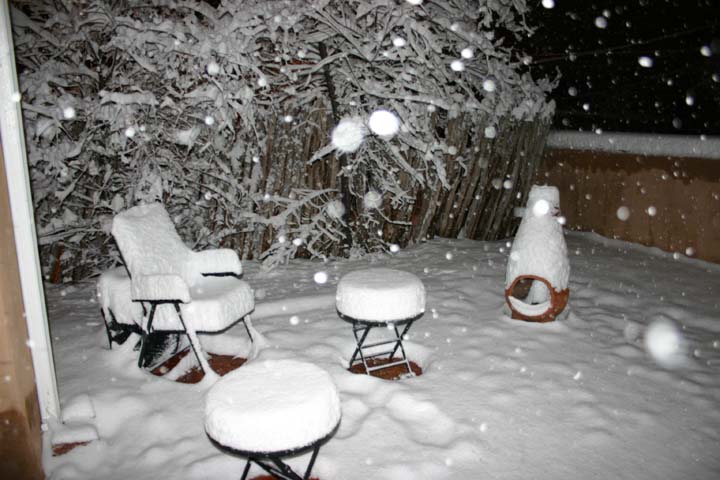 The storm total in Santa Fe was 7 inches, as it stopped snowing shortly after I posted the above. There was a little more in the mountains, where Ski Santa Fe received 10 inches.