With the first major winter storm of the season moving in, I was very hopeful that sometime on Friday, November 9, I would get an opportunity to observe some thundersnow. I was not disappointed. As a strong trough was digging into the western states, a strong southwesterly flow was pumping moist, unstable air into Colorado. This, combined with forcing from a cold front, would likely trigger thunderstorms over much of western Colorado, with temperatures in the higher elevations cold enough for some of the precipitation to be in the form of snow.

Early on the morning of the 9th, around an inch of snow fell in Pagosa Springs early in the morning (but up to 5 inches in the slightly higher country 10 miles or so northwest of there). I did hear some reports of thunder with this, but did not hear any myself, though there may have been some in the early morning hours before I was up. After this, there was a lull in the precipitation through the middle of the day. Later, though, a thunderstorm produced a burst of heavy rain and gusty wind in the Pagosa Springs area around mid-afternoon. This was an isolated storm that went up ahead of a line to its northwest that appeared heavier on radar, although it is hard to tell with any certainty because the mountains often prevent accurate detection of the low-topped storms characteristic of winter convection. Anyway, I decided to try to intercept the line of storms in the slightly higher terrain northwest of town, hoping to see some thundersnow or similar phenomenon. This was around 3:30 p.m.

Stopping a mile or so north of where the pavement ends on Piedra Road, in the first place with a good view of the wide open terrain south of the Piedra River valley, I noticed lightning flashing in the precipitation area behind the leading edge of the storm. I also noticed that one area of particularly heavy precipitation just a little toward me from the Piedra River appeared to be very light in color, suggesting to me that the predominant precipitation type might be snow or graupel. This was around 3:50 p.m. I decided to head a few miles farther north to see what type of precipitation was falling. Where I had been parked light rain was falling, but as soon as I got in to the heavier precipitation it became a mix of rain, snow, and graupel, then predominantly graupel (snow pellets) in the heaviest part, with occasional lightning and thunder. The temperature, which had been 46 when I started out from Pagosa Springs and around 40 when I made my first stop, was now down to 35. As the storms, in a line from northeast to southwest, gradually shifted east, I realized that the heaviest precipitation was getting past me, so I backtracked to a spot a mile or so north of where I had originally stopped. This was where I encountered the heaviest burst of precipitation around 4:30 p.m., now all graupel/snow pellets, and also caught this flash of CG lightning: 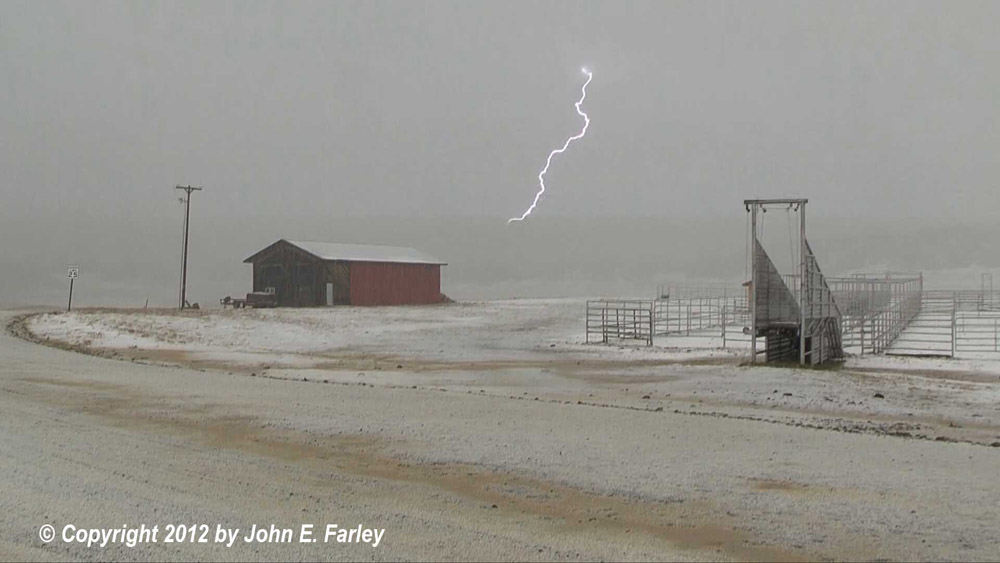 This is only the second time I have ever caught a cloud-to-ground lightning bolt when the precipitation type was snow or graupel, and I have seen only a handful of such shots by others as well - so I felt very fortunate to get this. This is a video capture, and because most video cameras including mine scan from the top down, they sometimes miss part of very quick events like lightning flashes - hence the very bottom of the bolt is missing - but you still get the idea since most of it is there. I did make a merge from two frames that together show the entire bolt, which you can see here. Took a while to get the brightness of the background from the two merged frames to match up reasonably well, but I think this shows it pretty well.

Below is a link to a video of the event. The first two segments show lightning flashing in the winter precipitation falling just behind the leading edge of the approaching storms. The rest of the video shows the graupel falling and the lightning and thunder when the heaviest part of the storm moved over. Note that, while there is some snow on the ground in the fields from previous snowfall at the start of these segments, the roadway rapidly becomes covered, as the graupel accumulated to a depth of about a half inch over the time of 15 minutes or so when the heaviest part of the storm was moving over.

At the time I got this video, the temperature remained at 35, as it continued to do until I drove back to lower altitude and the storm had fully passed. The altitude where I took this video is between 8,000 and 8,500 feet, higher than my home which is about 7,500 feet. The graupel did accumulate on my car despite its wetness and the above-freezing temperature, as can be seen here. At my home, in contrast, the precipitation type remained rain past midnight during intermittent showers and a couple thunderstorms that moved through. Sometime well after midnight it changed to snow and continued with intermittent heavy bursts until about 9:30 a.m. the next morning (Nov. 10), by which time a little over 2 and a half inches had accumulated. Of course the accumulations were much greater in the mountains, where some locations received storm total snow accumulations of 20 inches or more, giving a much-needed kick start to the ski season.