With strong mid-to upper level winds creating considerable speed shear and with very cold air aloft over and ahead of an upper low approaching from southern California and Arizona, there appeared to be some potential over southwest Colorado and nearby areas for severe weather, including supercells - if the sun could stay out long enough and heat up the atmosphere enough to creat sufficient instability for strong storms. The potential for the area was enough for SPC to place the Four Corners area in a slight risk for severe thunderstorms and to consider a severe weather watch for the area. As it turned out, however, the sun never was out for more than a half hour or so and the instability was limited by the passage of numerous showers and thunderstorms through the area throughout the day and the night before. Only one SVR warning was issued in southwest Colorado (west of Durango) and no severe weather was reported, though some may have occurred in remote mountainous areas. To the southeast, a couple supercells did develop in northern New Mexico, with one producing a 4-inch hail accumulation in Los Alamos and another a tornado warning in the mountains between Santa Fe and Las Vegas along with some large hail in the Lamy area. Even farther east, it had appeared that in the main area of severe weather expected with this storm system, in the warm sector over the TX Panhandle, a fairly robust outbreak of severe weather might occur. But this area also produced only a fairly limited amount of severe weather, including a fair number of hail reports in eastern NM and West Texas, but only a couple brief tornadoes documented by storm chasers near Hale Center, TX. Again, widespread precipitation holding down the instability may have been a limiting factor.

Despite the lack of severe weather, I did manage to get a few decent pictures and observe an interesting mix of winter and summer precipitation types with the storms in southwest Colorado. I ventured out from Pagosa Springs twice to document the two strongest waves of storms that came through, one around mid-day and the second late in the afternoon. With the first, I encountered a brief barrage of pea-sized hail between Pagosa Springs and Chimney Rock from a newly-developing cell, then managed to document some lightning farther west near the Archuleta/La Plata County line: 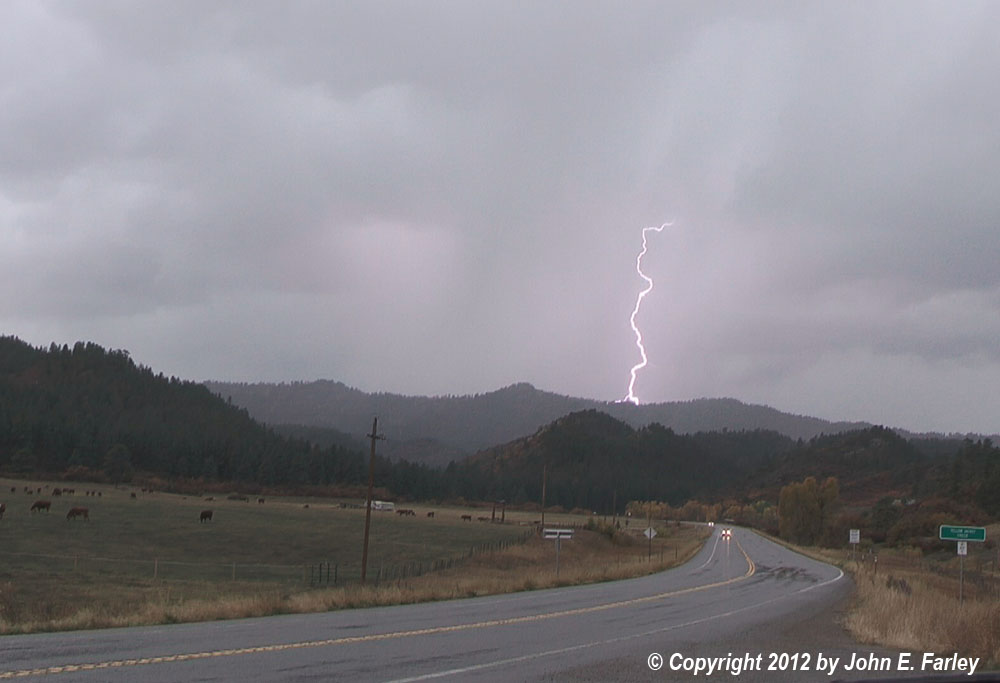 That was about it for the early storms, though, as the numerous storms, their rapid 50 mph movement to the NNE, and the mountains and limited road network made positioning for good pictures nearly impossible. So, when the next round of stronger storms approached late in the afternoon, I decided to take a different approach and head north from Pagosa Springs into the wide valley of the Piedra River. There I encountered a fast-moving storm that produced an interesting mix of rain, hail, and partially melted snow/graupel with thunder in the valley, and some accumulating snow in the highest reaches of the mountains. This storm was the tail-end storm on a line of storms that moved rapidly toward the NNE through the valley and into the mountains. 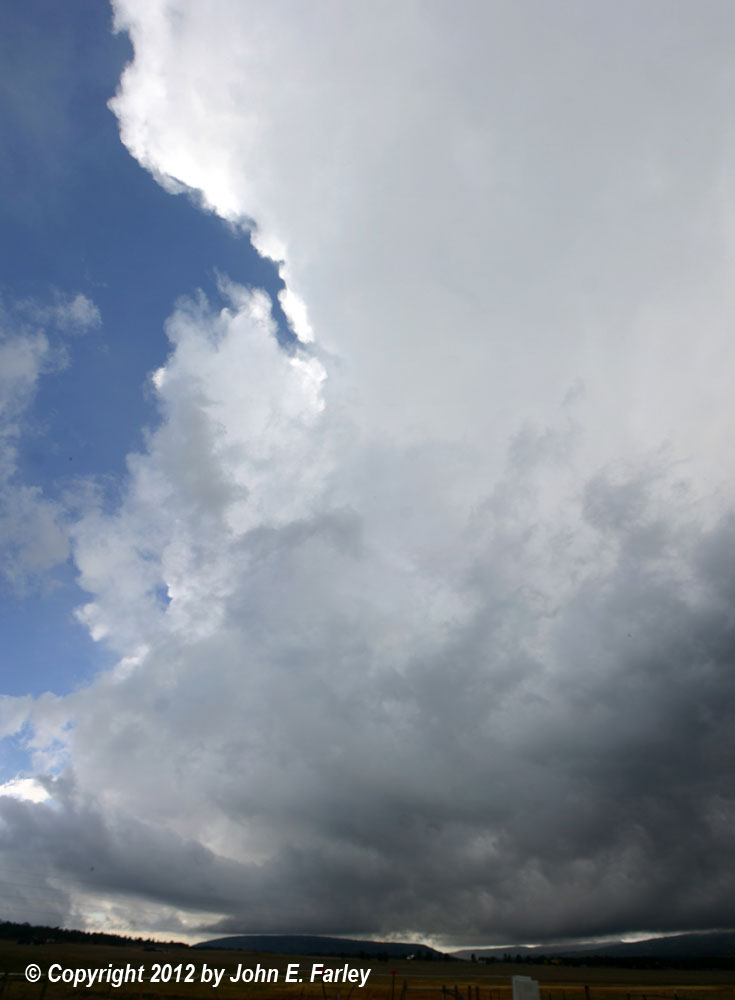 Approaching tail-end storm. Well glaciated top, but not yet much precipitation reaching the ground. Note the hard updraft tower on the left, just below halfway up. This picture is my first try at a vertical photomerge, four photos merged vertically.

As the storm approached closer, I noticed some rotation in scud tags under the low updraft base, but by the time I could get the video camera out, the rotation was no longer visible. As the storm moved over me, I first got pea-sized hail which soon mixed with rain and half mounted snow or graupel, as can be seen here. My third "thunderslush" event in two weeks, but this one had hail, too. Here are a few more pictures I got after the storm passed: 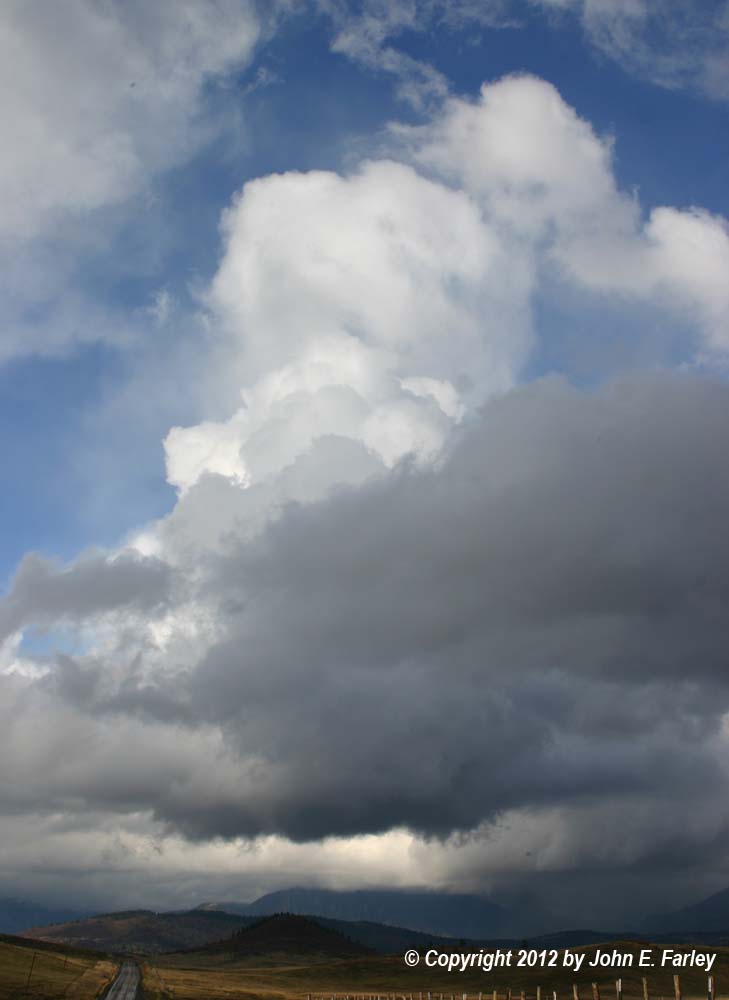 Storm is tilted away from me here, and moving more or less directly away from me. Not sure if this is the same cell that went over me or a new one that formed behind it. 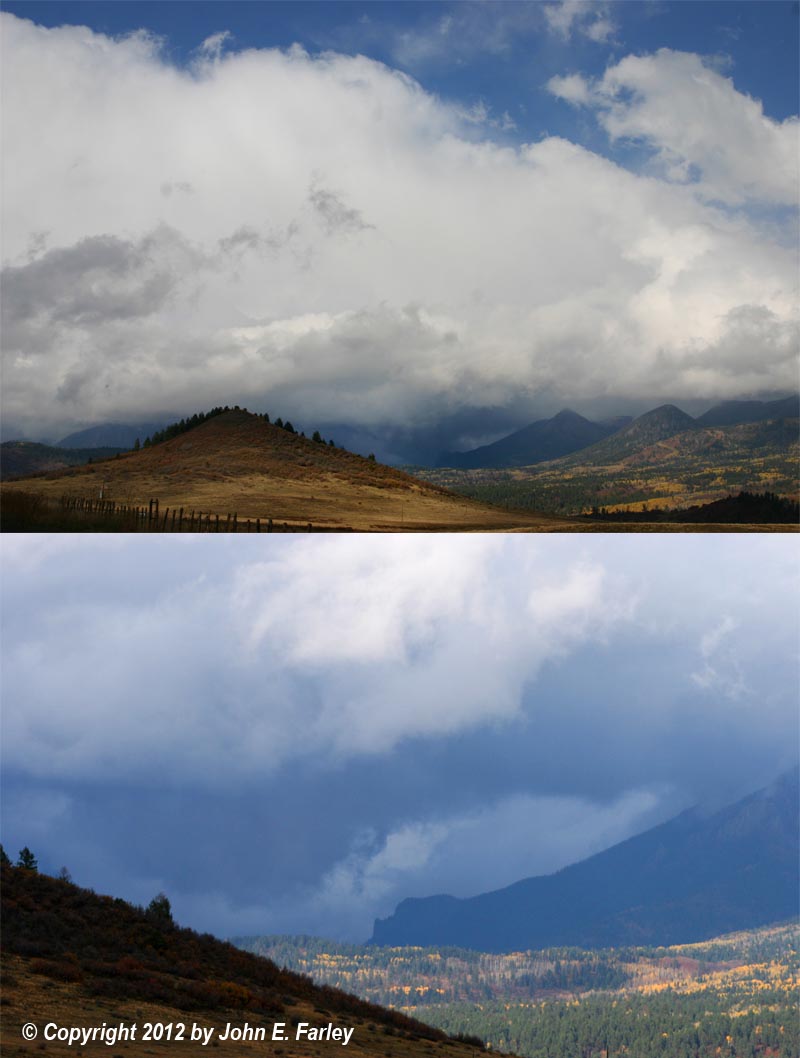 As the storm moved into the mountains, a lowered area formed under the base.

Sun after the storm illuminates freshly fallen snow on the highest peaks.

After this storm passed, I hung around for a while to look at a new line approaching from the west. This panorama of a storm over the mountains to the northwest in that line of storms illustrates the low-topped, highly-sheared nature of the storms today:

Like I said, nothing severe, but still not a bad day photographically, especially the second outing. And a total of only about 90 chase miles for the two outings.