The Severe Weather Setup: An upper low over SE AZ was moving SE slowly into Mexico. It was pumping lots of moist air upslope over southern and eastern NM. There was also decent directional shear, and also pretty good instability expected with areas of relatively high CAPE forecast to 1500 over far southern NM and 1000 over eastern NM. A possible concern from the model forecasts: TOO many storms, making it hard to pick the best one, creating visibility issues, and keeping the energy from being concentrated in any particuilar storm. Initially I thought I would target the eastern NM area due to proximity and good EHI forecast by the models, but after heading out around 10 a.m., a data check around 11 at Clines Corners showed SPC sticking with southern NM for best storm chance, decaying showers moving in to eastern NM (which could inhibit destabilization), and strong storms already occurring over far southern NM. I decided to continue SSE to Vaughan for lunch and another data check, then go either east toward Ft. Sumner/Clovis or SSE toward Roswell. Upon the data check, the strongest storms still well south at noon, with SPC still favoring this area. So, I decided to continue on toward Roswell on U.S. 285.

I briefly jogged west on route 237 from between Vaughan and Roswell to check out storms over the mountains to the W and SW. Nothing else was happening farther east yet, and these storms had been strong as they moved through the mtns around Ruidoso. I hoped to at least get some lightning pics, as I saw 2 or 3 CGs while moving, but once I stopped I had no luck, and these storms were clearly elevated and weakening. Meanwhile, quite a few other elevated storms were forming in the general area. I decided to return to 285 and continue S toward Roswell to try to get to clearer air.

By around 1:30, stronger surface-based storms were going up to my SE. Initially there were 2 storms, one north of the other, both of them NE of Roswell and SE of my position. Due to poor road network (there are very few places to cross the Pecos River east of 285 between Vaughan and Roswell), I decide to continue on 285 to just N of Roswell then head NE on 70 toward Portales to intercept the storms. This route meant that I had to go past the storms then turn back toward them, but with their slow movement (20 mph or less), I figured I had time. The southern of the two now-strong cells was near route 70 between Roswell and Portales around 1:50 when the storms got their first special weather statement from the ABQ NWS. By 2 p.m. I was on route 70 heading NE toward the storms, which intermittently were now producing ragged lowered areas/wall clouds under the updrafts. 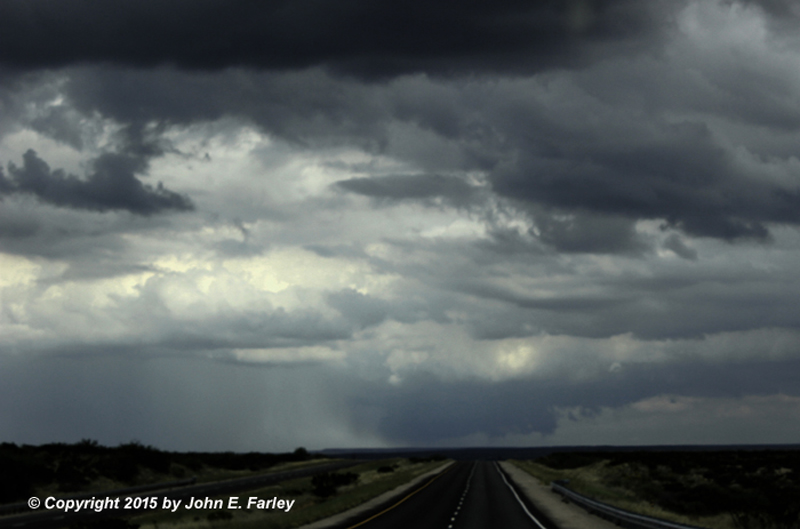 By the time I could catch up to the southern storm, it had moved N of route 70. For a while it had been just the two strong surface-based storms, but now a number of others were popping up to the S, E, and NE. I decided to head NW from Kenna (which is about midway between Roswell and Portales) to intercept the southern of the two initial storms, now to my NW moving slowly NNE. But a new storm to my NE was gradually strengthening, and new storms to my SSW were moving toward the dirt road I was on - a place I did NOT want to be caught in a heavy storm. I returned to 70 and headed NE to intercept the northeastern storm, which continued to strengthen. I headed N from Elida to intercept this storm, which by 3:00 p.m. had the first SVR warning of the day from ABQ NWS. The storm produced 55 mph wind and nickle-size hail at the Melrose Bombing Range to my NW around 3:30, and by 3:40 I could see a large but from my initial view low-contrast wall cloud. At this time, the storm appeared to be taking on HP supercell characteristics. I headed north as close as I could get to the storm without driving into it - it looked still quite intense but more outflow-dominant - then I headed east to Portales. 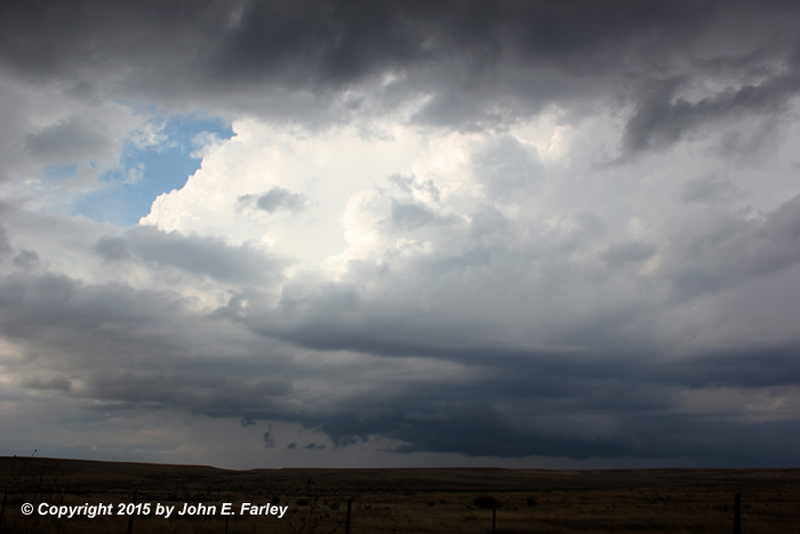 Photo of storm taken around 3:20 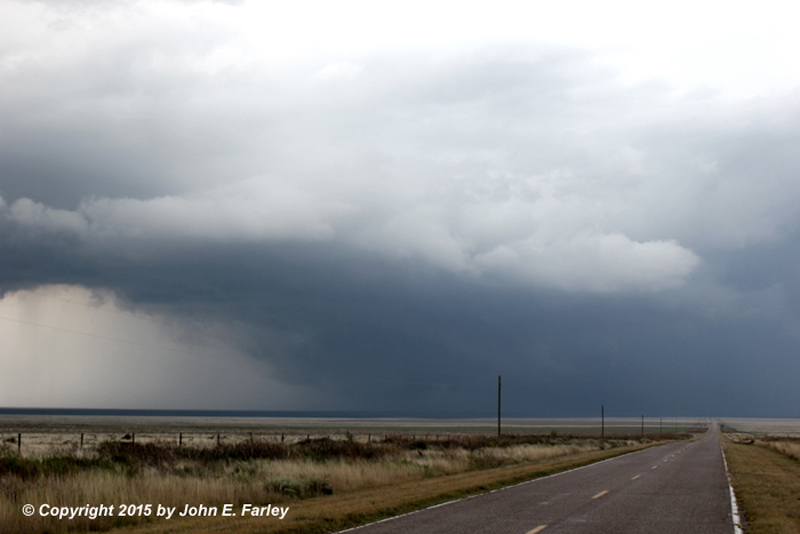 Photo of storm taken around 3:40


By now, new storms, both elevated and surface based, were popping up all over. I drove through one brief downpour as I head toward Portales. As I neared Portales around 4:15, I noticed a very intense looking storm to the NW - for which a SVR warning was promptly issued, around 4:15 p.m. Here is a picture from around that time: 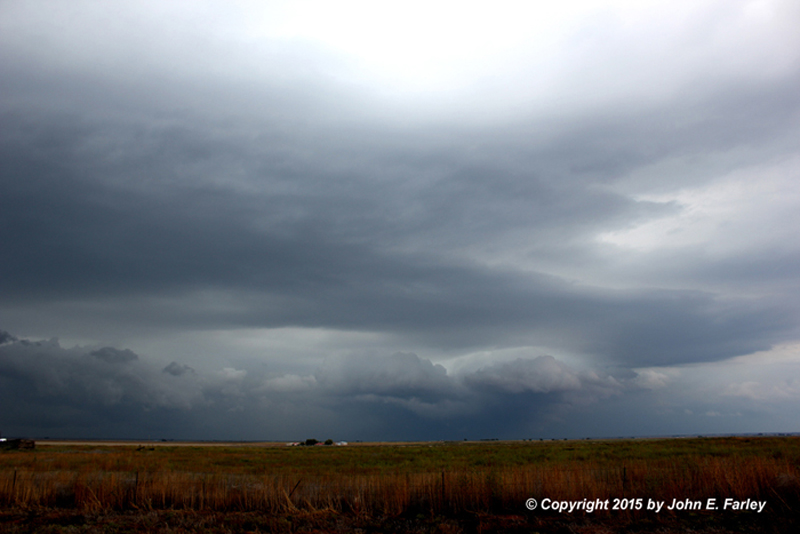 I am not entirely sure if this is the same storm I had been on before or another that formed just to its E or NE - storms were going up all over the place now - but it clearly was the one to go after now. But I had to get through Portales, which took around 15 minutes. But by 4:35, when I was through town and again had a good view of the storm, it was becoming more linear but formed a very impressive shelf cloud: 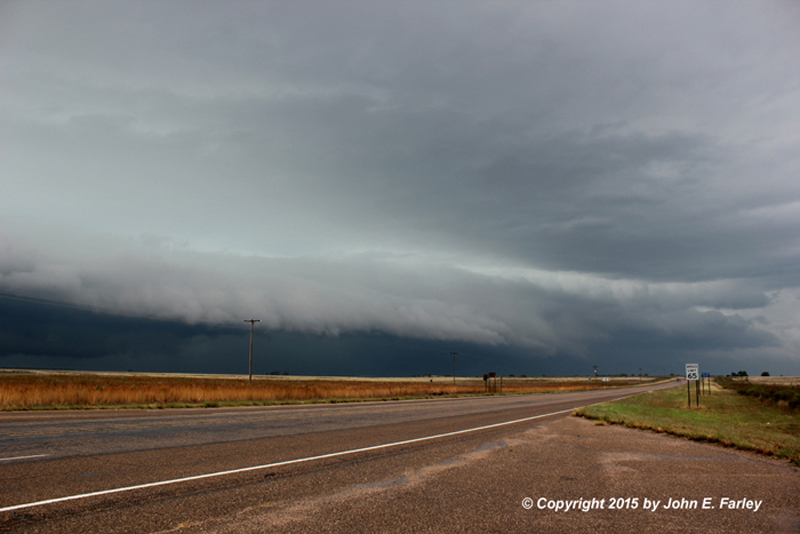 The storm, still SVR warned, was moving the general direction of just NW of Cannon AFB. By the time I got there, the storms had totally lined out, with the heaviest cell now north of the base and NW of Clovis. Another very heavy cell had formed earlier more or less over CLovis and moved NNE from there into TX, though I did not have a clear view of that one. I could not really keep up with the storms any more, but did not want to drive right into the line west of Clovis either, so decided to stop for food in Clovis. There was widespread street flooding in Clovis from the first storm that had formed more or less over Clovis, ahead of the main line. Checking data while eating a little after 5:00, I saw that this storm looked intense and supercellular as it went SVR warned to my NE in TX. It did produce 58 mph wind in Frionia and from the radar signature I would also guess that it produced copious amounts of hail.

I took an alternate route west out of Clovis after eating. Storms now were very widespread with the main line moving into Clovis, but nothing SVR-warned, so I figured if I watched for flooding, I could safely start back toward Santa Fe. I avoided 60/84 going out of town, because it was quite badly flooded already when I had come into town and very heavy rain had moved in again. This turned out to be a good choice, as a mile of the road was closed at the west edge of Clovis. I saw lots of minor flooding but was able to get through and head west to Ft. Sumner where I decided to stay for the night. Intense rain and some very close CG lightning occurred for the first 10-15 miles out of Clovis. Then it lightened up, and I got a nice pic of sunset into rain S. of Ft. Sumner before arriving there around 7 and calling it a day. Here is the picture taken at sunset: 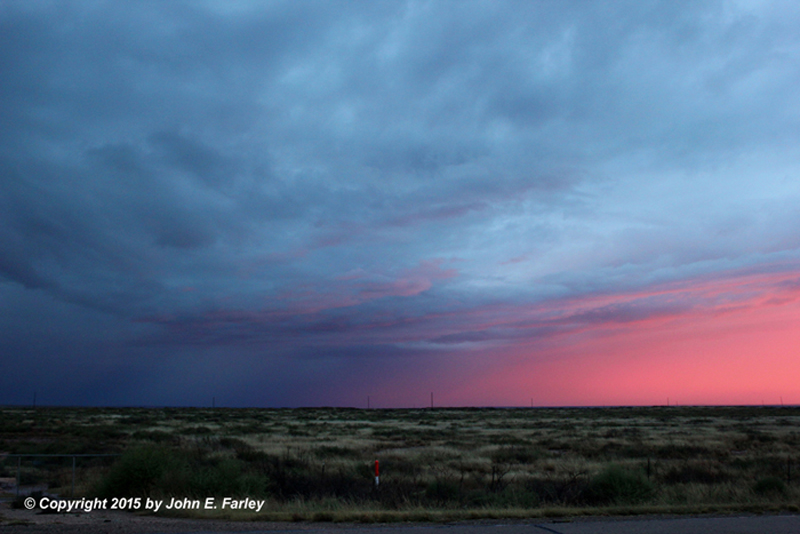 Storm total rainfall reports around Clovis were very impressive, with more than 4 inches at Ranchvale around 5 miles north of Cannon AFB (right where the second SVR-warned storm passed over), 3.5 inches in downtown Clovis, and 3.16 inches at Cannon AFB.