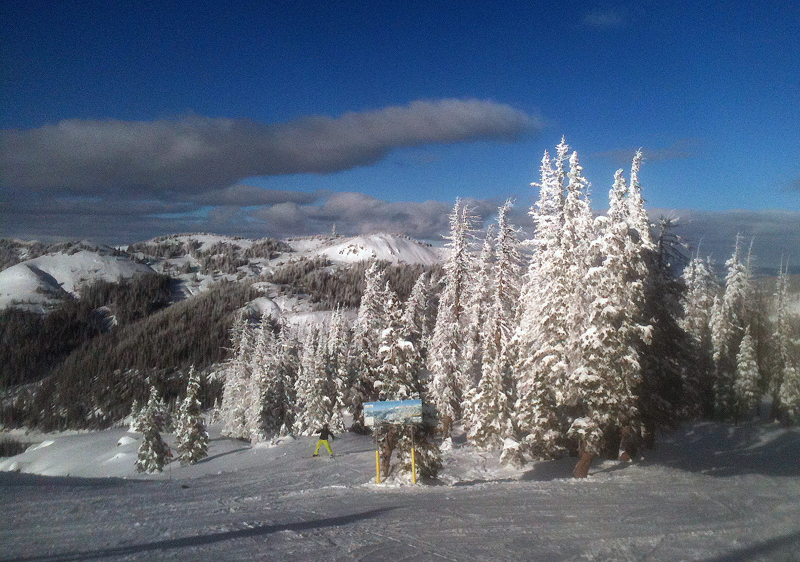 If you want snow you can count on, this is the place to go. Wolf Creek will usually have at least decent snow conditions when other places don't. In bad New Mexico snow years, it will typically have better snow than anywhere in New Mexico. And when the snow is bad farther north, it will usually have better snow than Wyoming or the I-70 corridor. I have seen people come all the way down from Jackson Hole when snow was sparce there but plentiful at Wolf Creek. Wolf Creek boasts that it has the "most snow in Colorado" and historically that is true. The past few seasons, though, it has been edged out by places like Loveland and Arapahoe Basin farther north along the Continental Divide. But not by much, and year in/year out, the snow is not more reliable anywhere than it is at Wolf Creek. The location of this ski area, near Wolf Creek Pass at the head of a long canyon extending southwest, results in the funneling of moisture up and into the ski area, so that heavy snow dumps of 1 to 3 feet, sometimes more, are common, and occur multiple times every winter. For example, during the generally sparse first half of the winter of 2014-15, Wolf Creek got five feet of snow during one 2-week period, just in time for the Christmas and New Years crowds. The reliability of the snow also often means an early opening. It is nearly always open before any New Mexico ski area, and is usually one of the first three or so to open in Colorado. In 2011 and 2013, opening day was in October!

Wolf Creek will get crowded during weekend, spring break, and holiday periods, surprisingly so for a place that requires as much effort to get to as it does (nearest major airports are 4+ hours away in Albuquerque and Colorado Springs, and it is more than a 3 hour drive from the nearest urban center, Santa Fe, and more from anywhere else). This is especially true if, as has often been the case recently, New Mexico or other parts of the West are having poor snow years - skiers in Texas, New Mexico, and Oklahoma know that, if their favorite place elsewhere does not have snow, Wolf Creek will. However, if you can get to Wolf Creek during the week in any non-holiday, non-spring break period, you will find delightfully uncrowded slopes.

Wolf Creek's top-to-bottom vertical along most of the main runs runs around 1,000 to 1,100 feet, though if you ride two lifts (Treasure Stoke, then ski down to the bottom of Elma) you can stretch that to around 1,400 feet. There is something here for all levels of skiers, and those who like trees, deep powder, and bumps will be especially pleased. Nearly half the acreage of the ski area is essentially back-country skiing served by a lift (Alberta). On this southeast half of the mountain, there is no grooming and really very little in the way of designated runs. Just lots of trees, chutes, glades, and powder. The northwestern half of the ski area, however, offers lots of choices for all levels of skiers. There are steeps and open bowls for the experts (mostly accessed by the Treasure Stoke lift), cruisers for the intermediates (accessible from the Treasure Stoke, Bonanza, and Raven lifts), and a long, gentle, top-to-bottom run for novice skiers (accessed from the Bonanza lift or, for its lower two-thirds, from the Raven lift).

If there is anything wrong with this ski area, besides the surprisingly crowded conditions during holiday and spring break periods, I would say that it is a somewhat chaotic base area setup. There are three different lodges and several other buildings for rentals and ski shops, and the rather steeply sloped terrain renders the parking setup equally scattered and chaotic. From some places there is a shuttle, but it is also possible to park pretty far from the base area in places that don't have shuttles. But you are there to ski, and the skiing will make you forget quickly about whatever hassle you may have had parking or getting oriented in the base area. 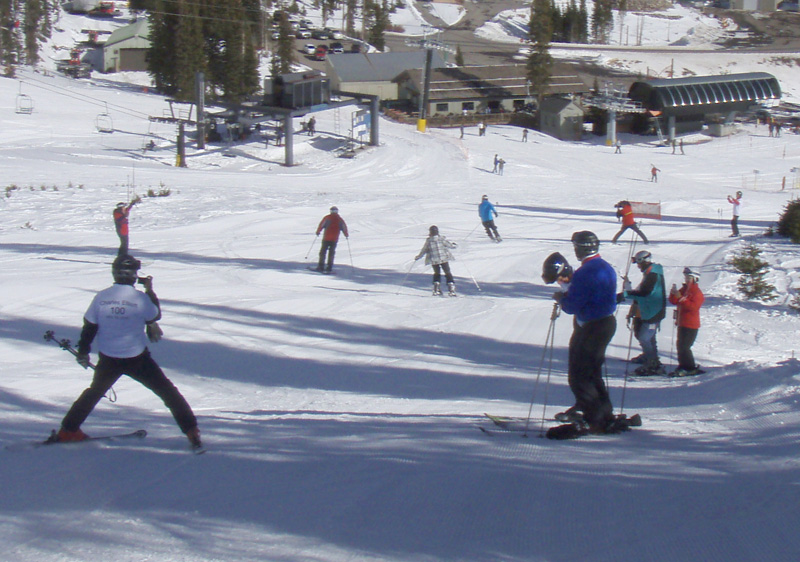 Looking down toward the Base Camp lodge. The leading skier in this picture, Charles Elliott, was celebrating his 100th birthday on skis. He, along with two other pioneers of the Wolf Creek Ski Area, is in the Colorado Ski Hall of Fame.

What's new? Wolf Creek has been making improvements steadily in recent years. In the past decade it has converted two fixed-grip lifts to high-speed quads (Raven and Treasure Stoke). This season introduces the Elma lift, which is actually a relocated fixed-grip lift that was replaced last season by the Treasure Stoke high-speed quad. (The lift is named after a faithful black labrador owned by the Pitcher family, the owners of the ski area.) This makes some previously-underutilized terrain much more accessible, and provides a better connection between the two very different sides of the ski area. And the two high-speed quads have significantly reduced lift lines and congestion at the bottom of the mountain, even during busy periods.

Info notes: While the copious snowfall here gives Wolf Creek some of the most reliably good ski conditions anywhere, be aware that the storms here can be very intense. During the strongest storms, snowfall rates of 2 inches per hour or more and very high winds can occur. When this happens, visibility can become non-existent and it is easy to get disoriented. On one ski trip during such a storm, before I was as familiar with the area as I am now, I inadvertently turned onto a totally different run that I intended to ski. I thought I was taking a narrow but gentle trail, but ended up in giant moguls with zero visibility. I made it down and eventually figured out where I was, but it was an adventure. On another day in similar conditions two snowboarders perished after accidentally going off the back side of the mountain (out of bounds). Their bodies were not found until the following spring. I mention these things as a point of caution if you do not know the mountain well and there is an intense storm. If that is the case and things get to the point where it is hard to see where you are going, I suggest either waiting for a better day or sticking to the Raven or Nova lifts, which do not go all the way to the top. Don't let this scare you, though - storms of this intensity usually occur only a time or two a year, and the great majority of the time you will be just fine.

Lodging: There is no lodging at the ski area, although this could change in the coming years if the controversial Village at Wolf Creek ("Pillage at Wolf Creek" to its opponents) is allowed to be built over the objection of the ski area owners and of environmentalists. However, there are lots of lodging choices in Pagosa Springs, about a half hour southwest of the ski area via U.S. 160. And you can also enjoy the world's deepest hot springs (three different hot springs spas!) and a wide choice of restaurants and bars. If you just want to ski and don't care about anything else, another choice is South Fork, a half hour northeast on 160. Be advised, though, that there isn't much in South Fork, so basically it is just a place to sleep. Skiers coming from Denver, Colorado Springs, or elsewhere on the Front Range might prefer South Fork because it is an hour closer to them; most others will probably prefer Pagosa Springs with its greater choices of dining and apres-ski activities.

Upsides: Reliably good snow and excellent variety of terrain - something for every level of skier. Usually open before any NM ski area and before most in CO.

Dowsides: Disorganized base area/parking, and stormiest days can be disorienting.