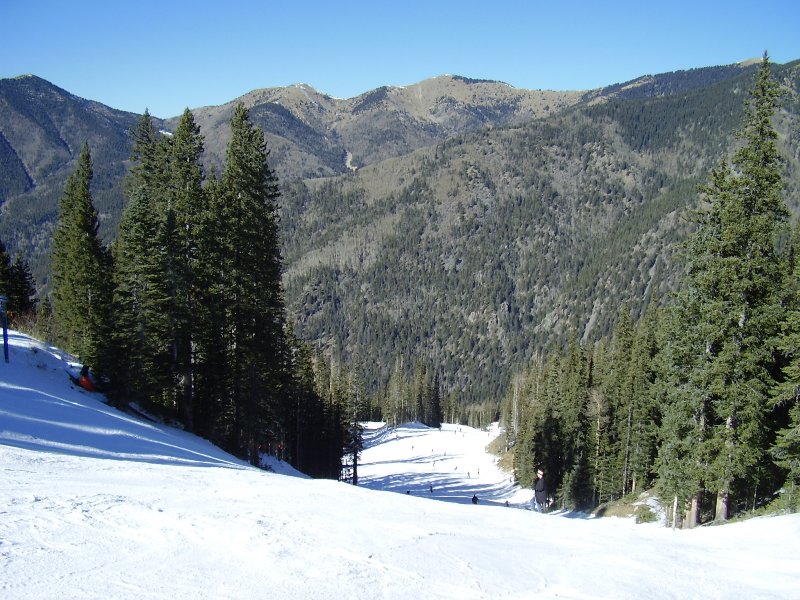 If you like challenging black diamond runs, tree skiing, and really steep open-bowl skiing, this is the place for you! Taos Ski Valley, New Mexico's largest and best-known ski area, offers terrain that will challenge the very best of skiers. There's plenty of challenging terrain accessible directly from the lifts, but if you want more, you can hike and treat yourself to some even-more challenging bowl and glade skiing. The lift-served vertical drop is New Mexico's biggest, over 3,200 vertical feet with the new chairlift to the top of Kachina Peak, installed for the 2014-15 season. The peak elevation of 12,481 at the top of Kachina Peak also means that Taos Ski Valley now offers the third-highest lift-served elevation of any ski area in the United States. A note of caution, though - the steep, rocky, largely above-treeline terrain of Kachina Peak requires a lot of snow to be safely skiable, and even back in the hike-to days, often did not open until January or even February. As of mid-January, it is my understanding that the new Kachina Peak lift has yet to open.

If you are not necessarily an expert skier, but want to become a better skier, and are willing to invest some time and money in doing so, this is also the place for you - Taos Ski Valley's "Learn to Ski Better" weeks - now called "Snowsports Weeks" since the addition of Snowboarding at Taos, will indeed make you a better skier or rider - in fact, they are one of the most respected ski education programs in the country. The most economical time to participate in this program is during non-holiday periods, when (as of 2015) this week-long instructional program costs as little as $130 for the full 6-day week, plus your lift tickets. (And if you get a Taos card, you can get further discounts on both the Snowsports Week and the lift ticket.) During holiday periods (weeks of December 21, 28, February 15, and March 8 this season), the cost is higher; $235 plus your lift ticket this season.

On the other hand, if you are an intermediate skier just out to have some fun, this might NOT be the place for you. Don't get me wrong - there are quite a few blue cruiser runs on the back side of the mountain, and intermeidates can have fun here. There is also a very good beginner area with two of its own lifts at the bottom of the front side of the mountain, and a second beginner area has recently been added. But a higher percentage of the runs here than at most ski areas are geared to advanced and expert skiers, and when Taos Ski Valley says a run is a black diamond, they mean it!

Although there is plenty of intermediate terrain, especially on the back side of the mountain, one thing that many intermediates do not like is the fact that, at the end of the day, there are only two ways back down to the main lodge on the front side of the mountain, and both are narrow and often crowded. The more popular route, coming from the runs on the front side of the mountain, also tends to become icy, and used to end with an abrupt S-curve just above the chairlifts and base lodge. This was tricky to negotiate, but fortunately it was eliminated at the beginning of the 2008-09 season, after the ski valley opened to snowboarders in March, 2008.

For a variety of reasons, Taos moves up from third to second this season in my Totally Opinionated Rankings of NM ski resorts. And I know there are many people who would rank it number one, a view that is increasingly difficult to argue with. Reasons for the higher ranking include the new Kachina Peak chairlift, additional hike-to terrain being opened this season, and improvements to the base village (see below.) Other improvements were made several years ago when Taos, not without controversy, opened to snowboarders after years as a ski-only resort. Taos opened to snowboarders near the end, rather than the beginning, of the 2007-08 season in order to see how things would work and to be able to make changes before being open to riders for a full season, and much-needed improvements were made to the runout to the front-side chairlift, which eliminated the mandatory shart turn and made more room for the heavy traffic that tends to occur here. Other factors in my higher rating this season include the addition of a new beginner area a few years ago, and the consistent ability of Taos Ski Valley to open early due to its considerable snowmaking, which was further improved with the addition of a couple high-power fan guns this season.

Taos has the most snowmaking capacity of any New Mexico resort, which means (usually) an early opening around Thanksgiving (the picture above was taken on opening day, 2005), and more terrain and better cover in bad snow years. For some reason, however, the manmade snow at Taos does seem a bit icier than other areas, at least to me. In good snow years, Taos gets spectacular dumps of snow, and in general probably gets the most natural snow of any NM ski area, owing to its relatively high elevation and its location in the highest mountains of New Mexico, not far from Wheeler Peak, the highest point in the state. Thus, like Ski Santa Fe, Taos Ski Valley has fared considerably better than many other New Mexico ski areas over the past several warm, dry seasons, which seem to be becoming the norm as the southwest climate becomes progressively warmer and drier.

Downsides: Lower percentage of intermediate terrain, narrow trails only option to return to base on front side. Also, highest-priced lift ticket in NM (but still not bad compared to major destination areas in other states).

What's New: Ah, where to start!?! No New Mexico ski area has had more changes and additions over the past decade than Taos Ski Valley, and the changes just keep coming. Already Taos was the largest ski area in New Mexico, but the addition of the Kachina Peak chairlift and new hike-to terrain now make it even bigger, with now the highest lift-served terrain in New Mexico (jumping past Ski Santa Fe in that category) and third-highest in the nation. Beginners now have two areas of their own. In addition to the existing beginner area with two chairlifts, at the bottom of the front side of the mountain, another has been added just to the east of the main lodge. This new beginner area, with its own 1500-foot chairlift, opened a couple seasons ago, offering beginners a new and longer run on which to develop their skiing skills.

Changes have also been made in the base area. These changes eliminate the tunnel and steps you used to have to negotiate in order to access the lifts serving the main part of the mountain from the parking lot. New condos and businesses are on the way as well, and on the backside, the ski area now owns the iconic Bavarian restaurant and lodge which used to be under separate ownership. Speaking of ownership, the ski area itself is under new ownership, sold a year or so ago by the Blake family which had owned and operated the ski area since its founding in 1955. The new owner is Colorado billionaire conservationist Louis Bacon. This new ownership ensures a continued flow of capital to make needed improvements, hopefully combined with an environmental ethic that will ensure that they are done in a responsible way.

Of course, one of the biggest changes in recent years was the decision to transition froma skis-only area to allowing snowboarding as well. As one would expect, the decision to allow snowboarding beginning on March 19, 2008 was a controversial one. Taos was one of the last four ski areas in the U.S. that was "skis-only." Within 24 hours of the decision, more than 400 posts had appeared on the ski area's blog, expressing every possible opinion from cheers to jeers. But the transition went smoothly, the snowboarders and their families brought a needed surge in business, and the decision seems a lot less controversial now than it did at the time. More controversial lately has been the Kachina Peak chairlift. The small but enthusiastic band of skiers who used to regularly hike up do not like the idea of everyone being able to hop on a lift and access the terrain, and indeed there is the danger of some skiers getting in over their head. But as with the snowboarding, this will bring needed business to Taos Ski Valley, and will make the spectacular views and challenging skiing of Kachina Peak accessible to far more skiers than when it could only be accessed by a long, steep hike.

Note: If you drive here, there is an efficient and frequent shuttle that will take you from your car to the base lodge when you arrive, and back in the afternoon. This system works well and is definitely better than the long uphill walks to the slopes from the parkng lots at several other NM ski areas. And now it is even better, since the tunnel and stairs have been eliminated.

Lodging: There are both hotels and condos located slopside in Taos Ski Valley. Some, such as the St. Bernard Hotel, are ski-in/ski out. Lodging at Taos Ski Valley can be expensive, though, and many people prefer to stay in the town of Taos, both because of more lodging choices and price ranges, and more to do in the evening or for non-skiers. Attractions include the historic Taos Plaza and its surrounding shopping and eateries, the even more historic Taos Pueblo, and a variety of musuems. The town of Taos is about a half-hour drive from the ski area, and is also within 45 minutes of the Red River and Angel Fire ski areas, should you wish to ski more than one place.