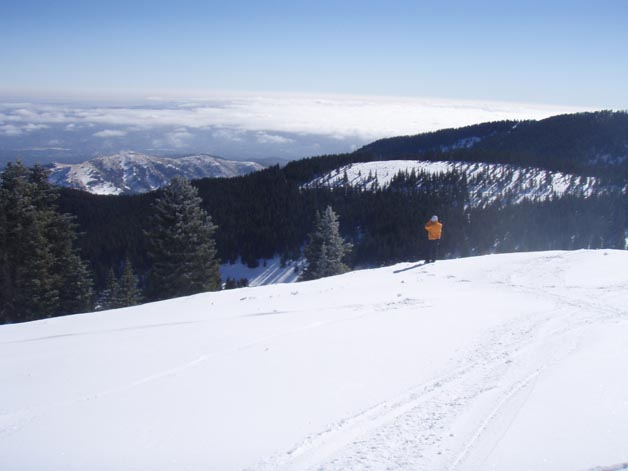 I can finally say something definitive about Ski Apache, since I finally got around to skiing it in January, 2010. I picked a good time - at that time, Ski Apache had more snow than any other ski area in New Mexico, and they got another inch or two the night before I skied. Ski Apache is big - probably as much terrain to choose from as anywhere in NM except Taos, with 55 runs over an 1800 foot vertical drop.

Ski Apache, located on the north slopes of Sierra Blanca in the Sacramento Mountains, probably has the best view on a clear day of any ski area in New Mexico - and that's saying something, given the spectacular views at areas such as Ski Santa Fe, Sandia Peak, and Pajarito. From the top of Ski Apache, you have spectacular see-for-miles vistas downward in every direction except the southeast, and on a clear day can even see White Sands. To the southeast, you look up at Sierra Blanca, which towers 12,000 feet above sea level and a good mile and a half above some of the desert terrain below. I thoroughly enjoyed skiing Apache, although I am sure that the fresh snow and largely clear day added quite a bit to the experience. This ski area also boasts New Mexico's only gondola lift, which will whisk you from the base area to the a place near the top where you can access nearly all the main runs.

One thing to keep in mind is that this is the southernmost major ski resort in the United States (though one or two small ski areas are farther south). This means that the winters can be warm and dry, and despite an average 180" snowfall, Ski Apache has struggled a bit in several recent winters. In the winter of 2009-2010, however, the El Nino pattern, with its deep southerly storm track, brought plentiful snow to Ski Apache, and in late December and January Apache had a bigger snow base than any other area in New Mexico. And Ski Apache does have snowmaking, so that helps it compensate to some degree in poor snow years. Indeed, despite its southern location, its snowmaking system, along with a couple southern-track storms, have allowed it to fare better during the 2014-15 season that several lower-elevation ski areas farther north.

Another thing to keep in mind is that (I would imagine, though I haven't driven up during a snowstorm) the road up to the ski area could be difficult during a snowstorm - it is steeper and curvier than the access roads to most New Mexico ski areas.

Although there is no lodging at the base of the ski area, there are numerous lodging, dining, and entertainment choices in the nearby town of Ruidoso, a major year-round resort.

The view toward White Sands (hidden by low clouds in this picture): 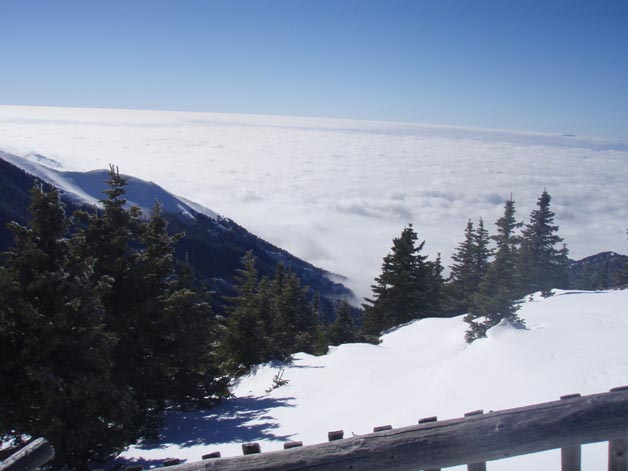