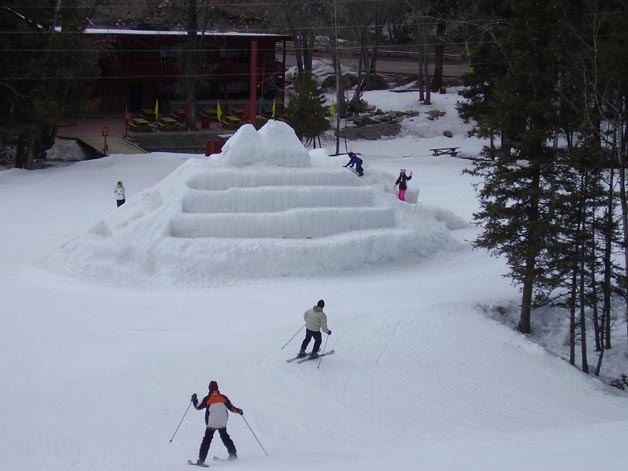 Sipapu is a small, family-run ski resort that is definitely a fun place to spend a ski day. As soon as you walk into Sipapu Lodge, you will see that this is skiing like it used to be - you will be greeted by a big stone fireplace, with a fire always going, and skiers sitting on couches in front of it warming their feet.

Sipapu offers just over 1,000 vertical feet of skiing, most of it served by the triple chair that rises from the base, and most of it consisting of intermediate runs. There is a small beginner area at the base, served by a couple of magic carpet lifts, and several terrain parks, including one near the top of the mountain, served by a poma lift. A short chairlift at the very top of the mountain provides access to challenging off-piste glade skiing, including some longer routes which will eventually bring you down somewhere into the main ski runs below.

Sipapu's runs, though, for the most part tend toward intermediate skiing, perhaps upper intermediate as some of them are narrow and they twist and turn down the mountain, intersecting and connecting in ways that give you a lot of routes down for a relatively small mountain.

Sipapu is one of the best places for early-season skiing, as its snowmaking ability and its location in a chilly mountain valley make it able to open earlier, and open more runs sooner, than many of its NM competitors. In fact, Sipapu has built a reputation in recent years for the longest ski season in New Mexico, opening in mid-November and remaining open into April. The downside of this is, though, that the man-made snow can become quite icy. This especially true early in the season and in poorer snow years (which have been the norm in recent years), when the man-made snow is subjected to daily cycles of melting or softening during the day (and getting scraped off by skiers), then re-freezing at night. On the other hand, the early season lift prices are a real bargain - before December 15 (when some other areas are just getting around to opening), you can ski nearly the entire vertical for just $15 a day. Bargain lift rates are also often available late in the season.

In addition to the big fireplace, the rental shop and a combined ski shop and convenience store are located on the main floor of the big, old lodge. Upstairs are a cafeteria/restaurant where all the food is cooked to order, and a friendly little bar with a TV to watch the big game while you take a break from skiing.

Downsides: Area is small, limited terrain for beginners and experts (except for the above-mentioned off-piste tree skiing), some runs are narrow.

What's new? Sipapu has prospered in recent years, building its reputation on its early opening and late closing. This, together with its low lift ticket costs and numerous specials, has made it popular with local skiers and family groups from Oklahoma, Texas, and New Mexico's cities. Improvements and upgrades in recent years have been mainly in snowmaking and terrain parks, building on the ski area's strengths. A new magic carpet lift was added for the 2014-15 season, and other changes appear to be in the works for 2015-16. Each season recently Sipapu seems to set a new record for the number of skiers, but except early in the season when it is the only area open and during holiday periods and some weekends, it is not crowded. Sipapu is one of the lowest-elevation ski areas in New Mexico, but its location in a narrow valley just below the 12,000 foot-plus Truchas Peaks and its snowmaking capabilities have placed it in a much better position than other lower-elevation ski areas to withstand the climate change that is bringing New Mexico warmer, drier winters. Thus, it has actually been lengthening its seasons, for years the longest in New Mexico, while other lower-elevation areas such as Pajarito and Sandia Peak, with more limited snowmaking, struggle to even get open.

Another bit of news this year is that Sipapu's owners have purchased or taken on management of three additional ski areas this year. They bought the Arizona Snowbowl and Colorado's Purgatory at Durango Mountain Resort, and took over management of Pajarito. Hopefully their experience with snowmaking and early opening at Sipapu will help them make much-needed snowmaking improvements at Snowbowl and, especially, Pajarito. And hopefully they will not become overextended by the transition from running one ski area to running four, some of which are quite a bit larger than Sipapu.

Info notes: Effective this season, you can buy the New Mexico Super Pass which is good at Sipapu and Pajarito with a discounted rate at Purgatory, or the Super Pass Plus which is good at Sipapu, Pajarito, and Purgatory. Both passes also enjoy a recriprocal arrangement that allows passholders to ski free for 3 days each at Red River, Angel Fire, and Ski Apache in New Mexico, and several other areas including Colorado's Ski Cooper and Sunlight. You can also buy a less expensive pass that is good only at Sipapu.

Sipapu is located a half hour or so from Taos, and about an hour and twenty minutes from Santa Fe.

If you are interested in staying overnight, ask about the package that allows you to stay free in the lodge with the purchase of a $39 lift ticket.

Lodging: As noted above, there are rooms in the third floor of the lodge where you can stay for free, subject to availability, with the purchase of a $39 lift ticket. This is basic accomodations, though - as one person in the bar said, pointing to the TV in the bar, "If you get one of the free rooms, this is your TV." There are also some less rustic accomodations available in the base area, and a wide variety of lodging in the town of Taos, a half hour or so away. 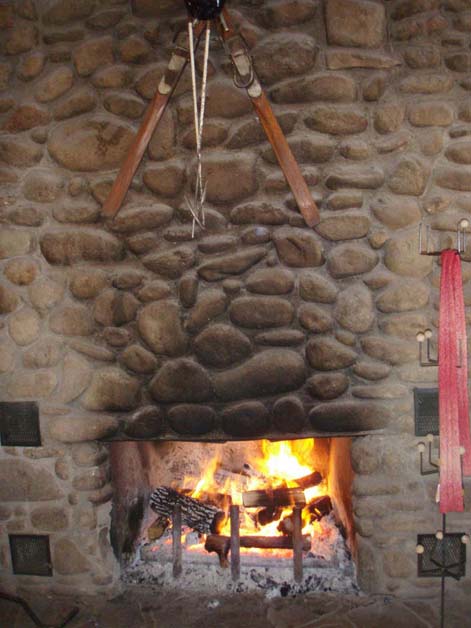