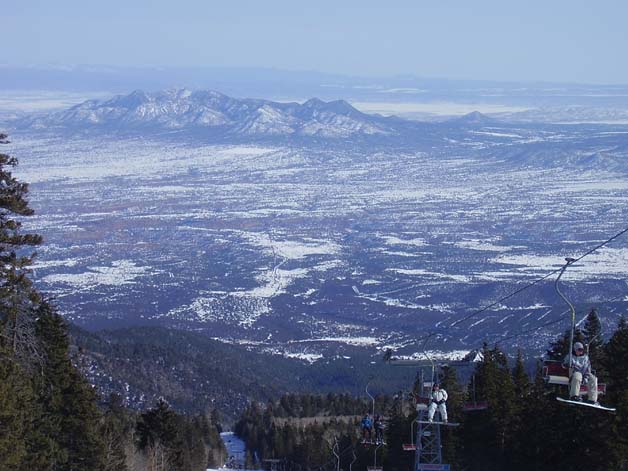 Located on the east side of the Sandia Mountains just northeast of Albuquerque, Sandia Peak offers the closest skiing to New Mexico's largest metropolitan area. You can access Sandia Peak in two ways - either drive east from the city on I-40 and exit on route 14, then turn left and follow the signs to the ski area - or just take Tramway Road to the base of the Sandia Peak Tramway, located in Albuquerque's Northeast Heights. If you take the tram, though, you need to have your own equipment, as rental equipment is only available at the base lodge area, not at the summit station of the tramway. Also, although the runs from the top are not steep, they might be a bit much for beginner skiers, so for them, too, it is probably better to drive around to the base area rather than riding up on the tram.

Because of the shape of the Sandia Mountains - abrupt cliffs on their west side facing Albuquerque and gradual slopes on the east side, where the ski area is located - the runs here tend to be rather similar to one another, though there area a good number of top-to-bottom runs to choose from. All the top-to-bottom runs are long, gently-sloping runs, most of them best-suited to easy-going intermediate skiers. These runs, and the two double chairlifts that serve them, are about a mile and a half long, covering a little better than 1,700 vertical feet. The top of the mountain, at over 10,000 feet, towers a mile above the city of Albuquerque, so it WILL be a good deal cooler here than what it is in town, and may also be cloudy or stormy when parts of the city are sunny and warm. Often, though, Sandia Peak skiers enjoy bright sun and New Mexico's deep blue sky. On such days, it is beautiful and - as you can see in the picture above - the view is great, but it is colder than in town.

Near the base lodge, there is a beginner area served by its own chairlift. This beginner area, and a few nearby areas on the lower part of the top-to-bottom runs, are the only parts of the mountain served by snowmaking. Hence, there are times, especially early in the season, when only the beginner area is open, and be advised that it is not accessible from the tram - this is another situation where you need to drive around. Also, because of the lack of snowmaking, icy and bare spots can be a problem on the upper 3/4 of the top-to-bottom runs. Sandia Peak does not get as much snow as areas farther north, so lack of snow can be a limiting factor in some years. Unfortunately, with the trend toward a warmer, drier climate in New Mexico, these problems have been exaccerbated in recent years. See "What's New?" below for more info on this.

I first visited Sandia Peak, via the tram, in the summer of 1967, when the tram was just a year old. I remember seeing ski runs and a chairlift when I got to the top of the tram. Today, that chairlift is still there, and let's say they did not design them for comfort back in the 1960s the way they do now. This oldest lift, on your left as you look up the mountain from the base lodge, is to be avoided if the other bottom-to-top chair, directly in front of the lodge, but a short walk uphill, is open. Both lifts serve the same terrain, but the mile-and-a-half ride on the newer chair is much more comfortable. At the top, just south of the upper tram station, there is another chairlift that serves only the upper 1,000 vertical feet of the mountain. This chairlift offers a shorter ride and serves some decent blue and green runs, and is a good choice when you get tired of the long rides on the other two. You need to ski down from the top, angling to skiers right as you go down, to get to this lift, since its base is well above the level of the base lodge.

Upsides: Nearness to Albuquerque, long cruising runs, great views on clear days - especially if you take the tram up to the ski area, quite a few long runs to choose from.

Downsides: Long, uncomfortable lift rides (especially on the oldest chairlift), limited advanced terrain, lack of snowmaking and limited snowfall can make for margainal conditions and limited openings on all but the beginner area in poor snow years.

Info notes: The Sandia Peak ski area is only open Wednesday through Sunday and on Federal Holidays, except during the Christmas/New Years period when it is open daily.

Sandia Peak is under the same ownership as Ski Santa Fe, and season passes at either of these ski areas are accepted at the other. On some passes, however, the period between Christmas and New Years Day is blacked out at Ski Santa Fe.

Lodging: There is no slopside lodging, but lodging of every type and description is available in nearby Albuquerque.

What's New? Unfortunately, Sandia Peak has been one of the New Mexico ski areas hardest hit by the climate change that has brought warmer, drier winters to New Mexico. Its operations were limited through much of the 2012-13 and 2013-14 seasons, and as of mid-January, it has yet to open in the 2014-15 season. Sandia Peak does have a revenue source through the tram, which operates year-round and caters mostly to tourists, and Ski Santa Fe. which, like Sandia Peak, is owned by the Abruzzo family. Hence, it does appear that the financial resources exist to expand snowmaking farther up the hill than where it is now, although top-to-bottom is probably not feasible. But whether or not to do so is a financial decision, and it appears that the current priorities for investment are Ski Santa Fe and the tram more so than the Sandia Peak Ski Area. Time will tell, but the future of this ski area appears dependent on either a return to colder, snowier winters or some serious investment in snowmaking.

Tram and view on Albuquerque side: 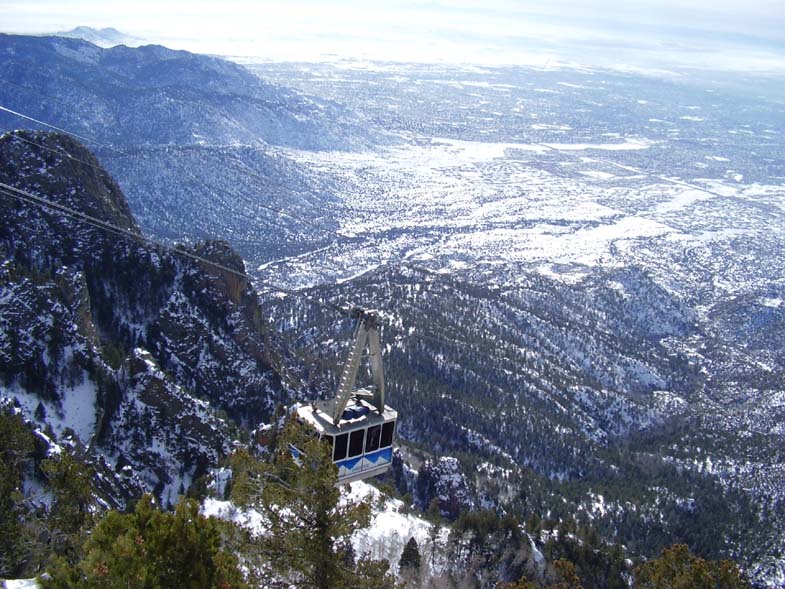