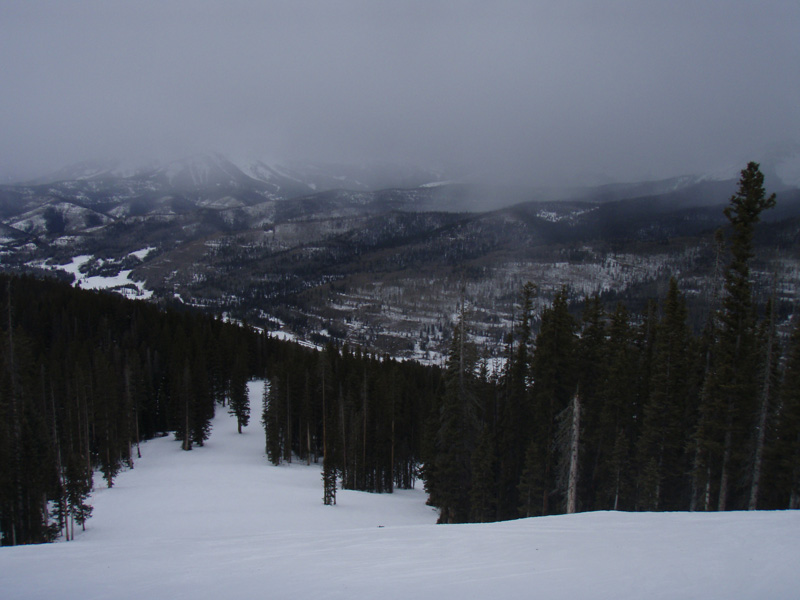 This ski area, which can't quite decide whether it is Purgatory or Durango Mountain (so it now includes both in its name) is one of the larger and more destination-oriented ski resorts anywhere in southern Colorado or New Mexico. In fact, its 1,360 skiable acres exceed the size of any other ski area in southern Colorado or anywhere in New Mexico. Hence, any level skier will find plenty of terrain to enjoy here, although the greatest number of runs seem geared to intermediate skiers. Although I took a couple vacations here with the St. Louis Ski Club back in the 1980s, I have only skied here a couple times in the last few years since moving out west. Two changes were noticeable. The most prominent one - a huge increase in the number of condos and a more upscale look. This is the visible manifestation of efforts over the past decade or so to make this into more of a year-round destination resort. Indeed, summer activities in recent years have been an increasingly important source of revenue for this resort. What this means for skiers is that if you want to stay slopeside with ski-in/ski-out lodging, your choices are now greatly increased. And, as I discuss below, there are a lot of winter activities here besides skiing. But you will pay for the slopeside amenities in the price of the lift ticket, especially if you just walk up to the ticket window rather than using a discount program or buying your ticket in advance or in a package. Although the ticket window price here is quite a bit less than the destination resorts farther north along I-70, it is higher than most New Mexico ski resorts.

The other change is the addition of two high-speed lifts, one quad and one six-pack. This will enable you to get a lot of vertical on this mountain, especially if you avoid the crowded holiday and spring break periods. Any other time, you will find it very uncrowded, especially on weekdays (as in the picture above). And the big size of the place and the number of runs means that you do not need to ski the same runs over and over - there are lots and lots of choices, especially for intermediate skiers. As far as I can see, there has not been much in the way of new terrain added - it seems like much the same mountain as it was years ago, but it as noted above it is the biggest in this part of the country and offers you lots of choices. The vertical drop is around 2,000 feet, although you would need to ski multiple lifts to use the whole thing. The most you can get on one continuous run without riding multiple lifts is a still-respectable 1505 feet.

There are also numerous winter activities besides skiing. Among them are snowshoeing, cross-country skiing, dogsledding, horse-drawn sleighrides, tubing, and snowmobiling. All of these are available from the base village, so there is plenty to do here besides ski. And for the really adventurous skiers and snowboarders, you can also arrange for snowcat skiing and riding, offered by San Juan Untracked.

The downside of this ski area, if there is one, is that it is at a lower altitude than ski areas such as Wolf Creek, Taos, and Ski Santa Fe, so in lean snow years (the norm recently) the snow conditions will likely not be as good as at the higher-elevation ski areas. But ample snowmaking and annual snowfall of 260 inches do ensure that you will usually have plenty of skiable terrain. And this resort does get big dumps of snow, especially in March and early April, so if you can catch one of these you can enjoy superb powder skiing here. The only reason I rank this area below Wolf Creek is that good-quality snow is more reliable at Wolf Creek, but if you can catch "Purg" when the snow is at its best, it is a gem!

Lodging: Lots of ski-in/ski-out lodging is avaiable in the base village. Other lodging choices include the nearby Tammaron Resort, with lots of condo lodging just a few miles from the ski area, or staying in Durango, about 25 minutes from the ski area, where lodging choices of all types abound, along with shopping and nightlife enough to keep you entertained whether you are a skier or not.

What's New? Just before the start of the 2014-15 ski season, Purgatory at Durango Mountain Resort was purchased by the family that owns New Mexico's Sipapu Resort. (They have a home in Durango, so are not unfamiliar with Purgatory.) This means two things. First - a real benefit for New Mexico skiers - you can save big money skiing here if you get the New Mexico Super Pass or Super Pass Plus, both of which are season passes good at both Sipapu and Pajarito. With the Super Pass, you can buy Purgatory lift tickets for $50, well below the regular price. And if you ski here often, the Super Pass Plus is an even better deal. It costs $50 more than the Super Pass, but gives you three free days at Purgatory, then lets you buy lift tickets for $50 for any additional days you want to ski.

Second, the new ownership may bring substantial new investment in the skiing at Purgatory. This could mean more high-speed lifts or additional terrain opening in coming years. In an interview with Durango Magazine the new owner, James Coleman, said "My plan is to add new terrain each year for the forseeable future." Hence, this already-large ski area could be getting even bigger in coming years.