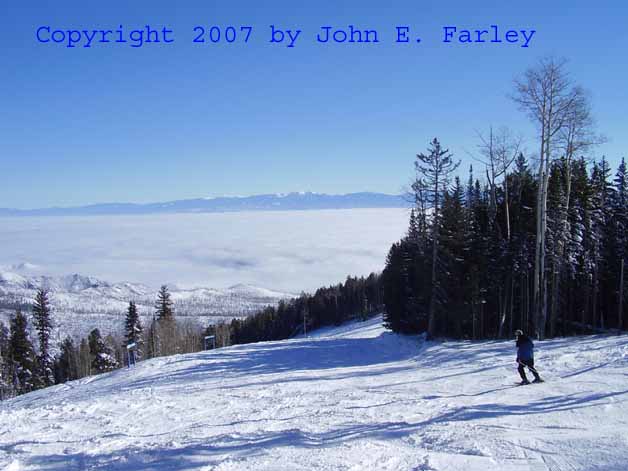 The Pajarito Ski area, located in the Jemez Mountains just above Los Alamos, is, in a good snow year, the best-kept ski secret in New Mexico! The tourists who head straight for Taos, Angel Fire, or Red River have never heard of it. Even the Texans who jam the lift lines on weekends at Ski Santa Fe 20 miles east for the most part don't know about it and have never skied it. But when the snow is good, there is no better place to ski in New Mexico! Pajarito, with a vertical drop of a little over 1,400 feet, is situated on a long north-facing ridge in the Jemez Mountains just above Los Alamos. The area is a couple miles wide, with 40 runs - all with vertical drops of 900 - 1200 feet - extending from the top to the bottom of the mountain. There are lots of groomed blue cruisers, especially under the Townsight and Spruce chairlifts. But there are also some very gnarly black runs, mainly served by the Aspen and Mother lifts. This is a place where there are so many runs that you can ski all day and not ski the same run twice. And you can get a lot of runs in here, because it is NEVER crowded.

The unfortunate news about Pajarito is that it has fallen on difficult times the past several years due to a devastating wildfire and a string of warm winters with far below-average snowfall. Both the 2011 fire (the second major wildfire in the Los Alamos area in a few years) and the repeated poor snow years seem to be attributable to the climate change that has probably not impacted any area more severely than New Mexico's Jemez Mountains. As is discussed below, the future of this ski area holds uncertainty unless and until its snowmaking challenges can be overcome. Fortunately, it has new owners and managers this season who may be exactly the right people to accomplish that.

Downsides: Limited snowmaking and a changing climate pattern in recent years have often rendered this ski area snowless. Call ahead or visit the Website, linked below, before going.

Info Notes: When a run here is rated black diamond, they mean it. In general, some runs that are blue or blue/black here (mostly the less-steep un-groomed ones) would be rated black at other areas such as Ski Santa Fe or Sandia Peak. There are lots of groomed cruisers, but the black runs are just that - advanced to expert skiing. Also, the cruiser runs here are groomed a bit less often than at other areas, but still a good number of runs are groomed, and with the lighter skier traffic, they don't really need to be groomed every day.

Effective this season, you can buy the New Mexico Super Pass which is good at Sipapu and Pajarito with a discounted rate at Purgatory, or the Super Pass Plus which is good at Sipapu, Pajarito, and Purgatory. Both passes also enjoy a recriprocal arrangement that allows passholders to ski free for 3 days each at Red River, Angel Fire, and Ski Apache in New Mexico, and several other areas including Colorado's Ski Cooper and Sunlight. You can also buy a less expensive pass that is good only at Pajarito.

Lodging: There is no slopeside lodging, but lodging is available 10 minutes away in Los Alamos. Another option is to stay in Santa Fe, about a 50-minute drive from the ski area, where lodging of every type and price range is available.

What's New This ski area is unusual in that, historically, it was owned and operated by a nonprofit ski club, the Los Alamos Ski Club. However, it has always also been open to the public. Unfortunately, the cost of recovering from the 2011 fire (discussed below) and the string of warm, nearly snowless winters the past few years put the club in severe financial straights, to the point that they could no longer afford to run the ski area. Fortunately, the Los Alamos County commissioners understood the value of the ski area as a resource for local residents and a potential source of tourism, and in 2014 Los Alamos County took over ownership of Pajarito Ski Area. They made the wise move of hiring the management of the Sipapu Ski Area to run Pajarito - wise because Sipapu has prospered from the effective use of snowmaking, exactly what Pajarito needs with its elevation which, like Sipapu, is considerably lower than ski areas such as Taos Ski Valley and Ski Santa Fe. With that lower elevation and the ongoing snow drought in the Jemez Mountains, Pajarito is in major need of improved snowmaking, and Sipapu's team knows how to do it.

Until the 2011-12 ski season, Pajarito did not have any snowmaking. A small snowmaking system was installed and became operational that season, but the small size of the system and, more important, a limited water supply prevented snowmaking anywhere except, on a limited basis, the beginner area. The new management is working hard on solving the water supply problem, but the permitting process for any means of doing so is complicated and the lack of water remains a problem this season and no permanent solution appears possible until the 2015-16 season at the soonest. With the weather warm and dry again so far this season, Pajarito has yet to open for the 2014-15 season as of mid-January. But when the snow is good, as it has been in the majority of years in the past, there is no better place to ski. And if at least some decent portion of the ski area can be outfitted with snowmaking, with sufficient water available, it can be a great place to ski again, even if the snows do not come back to the level they have been in the past.

The ski area also was faced with a challenging recovery from the devastating 2011 Las Conchas wildfire, the largest in New Mexico history. In fact, only a valiant effort by firefighters and a half million gallons of water saved the ski area from total destruction. As it was, the haul cable was damaged on two chairlifts (Spruce and Townsight) and the top station also damaged on Spruce, causing the cable and chairs to fall to the ground. The damage was covered by insurance, though, and both chairs were ready for action again in the 2012-13 season. Unfortunately, however, that season and the ones since were extremely poor snow years, so the new replacement chairlifts have yet to see much action. In addition to the damage to the chairlifts, trees and some grassy areas were burned around the top, east, and west boundaries of the ski area. You can see some of this damage along with restoration efforts here. But there was no damage to the base area, and the ski area can be fully operational as soon as there is sufficient snow.

One positive change is that, with the Sipapu team taking over operation of the ski area, the area will no longer be limited to Fridays, Saturdays, Sundays, and holiday periods as in the past when the Los Alamos Ski Club ran it. Now it will be open seven days a week whenever snow conditions permit. Definitely good news for skiers, and good news for Los Alamos tourism.

This picture, from just above the bottom of the Townsight lift, shows the view looking down at Los Alamos, with the Sangre de Cristo Mountains in the background. At the upper right you can also see Ski Santa Fe in the distance: 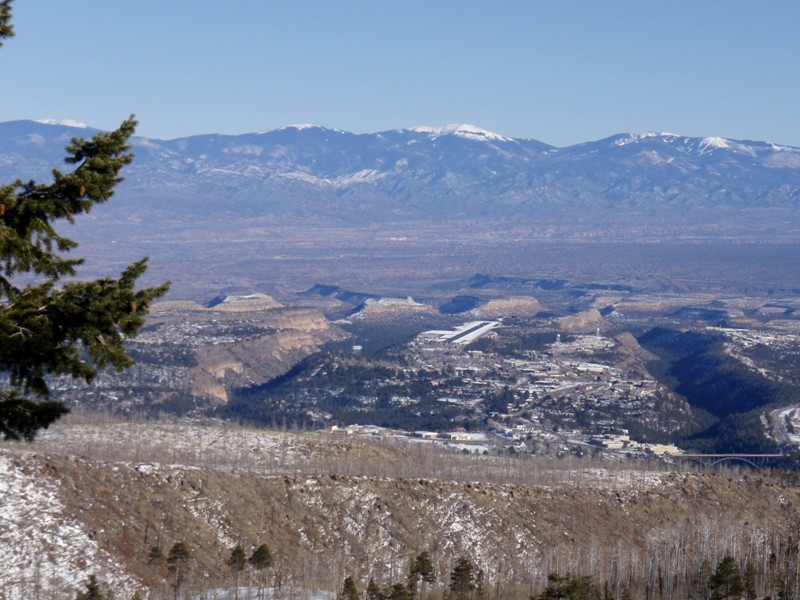