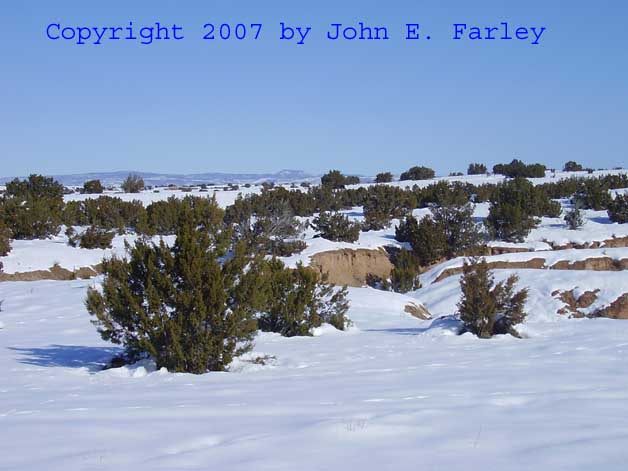 On December 28-30, 2006, a record snowstorm affected much of northern New Mexico, dropping 1 to 3 feet of snow in many areas, and even more in a few spots. A Web page with pictures, discussion, and a link emphasizing the meteorological aspects of this record storm can be found here.

On this page, though, my focus is on the beauty of the snowscapes that could be found throughout New Mexico's deserts and mountains during and, especially, in the days after the storm.

To see a larger image of any picture, please click on the thumbnails below.

The first set of pictures shows some scenes around the Santa Fe area a couple days after the snowstorm. The first shows some pueblo-style homes near Santa Fe with the Santa Fe ski area in the mountains behind the home. The second is interesting because of the confluence of a number of elements: the home, the Jemez Mountains in the background, the flock of birds in the sky, and the fog in the Rio Grande Valley between the foreground and the background. The third photo, which I call "Road to Enchantment," also includes the valley fog and the Jemez Mountains.

The next set of pictures are ones I took while skiing at Pajarito Ski Area near Los Alamos on December 31, the day after the storm.. The first is looking into the Valles Caldera, a valley that was created by the collapse of a huge volcano. The others are looking the Rio Grande valley. Both the Valles Caldera and the Rio Grande Valley were filled with remnant low clouds left over after the snowstorm, but at around 10,000 feet above sea level in the Jemez Mountains, I was well above the clouds when I took these pictures.

As shown in the next set of pictures, the desert, as well as the mountians, received a lot of snow. In fact, some high desert locations received in excess of two feet. The first picture below was taken near Cuyamunge early the morning of December 31, while the aforementioned low clouds still lingered over the Rio Grande valley. The second picture was taken about a week after the storm about midway between Albuquerque and Santa Fe, and the third picture shows the deep snow cover in and around the Cerillos Hills just southwest of Santa Fe.

The next set of pictures feature the Sangre de Cristo Mountains farther north, around Taos and Eagle Nest. The desert around Taos did not receive as much snow as farther south, but the mountains did. The first two show the mountains near Taos, while the third shows ice fishing enthusiasts taking advantage of the cold weather that followed the storm at Eagle Nest Lake. On this day, the road ended in ice, not water.

Speaking of the mountains around Taos, I was fortunate to pass through the Taos area around Sunset on January 4, enabling me to photograph the famous "Taos Glow." This is the alpenglow that occurs in the mountains near Taos when the light from the setting sun creates orange and pink tones in the mountains. The photos below are arranged in a sequence of decreasing sunlight intensity and increasing distance from the mountains (though with varying degrees of zoom using a 75-300 zoon lens), as I worked my way west looking back east at the mountains.

Farther south in the Sanger de Cristo Mountains, near Santa Fe, the alpenglow can also be quite impressive, as shown in the next two pictures. These pictures show Santa Fe Baldy at sunset, the first with a home illuminated by the setting sun in the foreground and the second taken when the sun had set in town and in the lower mountains, but while it still slightly illuminated Santa Fe Baldy.

While skiing at Ski Santa Fe on January 5, I got a couple interesting shots as lowering clouds from an approaching snowstorm fogged the ski area and coated the trees with frost. The resut was these rather surreal images, both taken from the new Millenium chairlift which ran for the first time ever on this day:

The next group of pictures, all taken from the summit of the Sandia Peak Ski Area on January 10, more than a week and a half after the big snowstorm, shows how white it still was around the Albuquerque area. The first picture, looking east, shows the southern section of the Ortiz Mountains and the high plains beyond. The road near the middle of the picture is the Turquoise Trail (NM route 14), the "back way" between Albuquerque and Santa Fe. The next shows the Sandia Peak Tram as it starts its journey down, and the third looks across the northern edge of Albuquerque, with Mt. Taylor in the distance.

To wrap things up, here are a couple pics taken in Santa Fe during the height of the snowstorm. The first shows the snow piling up, with the only light coming from a nearby street light, along with whatever city light was being reflected from the clouds and falling snow. The second shows a New Mexico fireplace, which feels really good after a day of skiing or photographing the freshly-fallen snow!

All of these photos are available for purchase. Prices are as follows:

To order any photo, please email John Farley. In addition to the above formats, some photos are available in larger formats, such as 16x20. To inquire about availability, please follow the above email link.