On Martin Luther King Day, 2012, a snowstorm moved across much of the Rocky Mountain region. In New Mexico, it was predicted to be a relatively minor storm, affecting mainly the northwest mountain regions. However, although as far as snow was concerned it was mainly a mountain storm, with accumulations held down in the valley areas due to mixing with rain, the storm produced quite a bit more snow in the north-central mountains than what was predicted. It dumped fully a foot of snow in the Sangre de Cristo mountains just northeast of Santa Fe, and with the low cloud bases the combination of rime and snow accumulation left spectacular scenes in the mountain forests. Additionally, the main part of the storm retreated eastward over the mountains right around sunset, creating spectacular skyscapes over Santa Fe just before sunset.
Here is a wide-angle view of the back edge of the storm as it retreated east over the Sangre de Cristo Mountains: 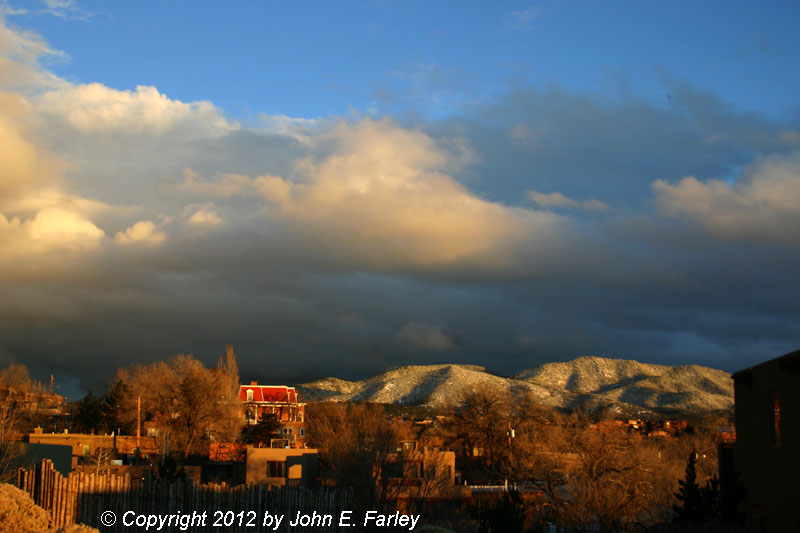 Here is a more zoomed photo taken a little later, as the light began to redden from the sunset: 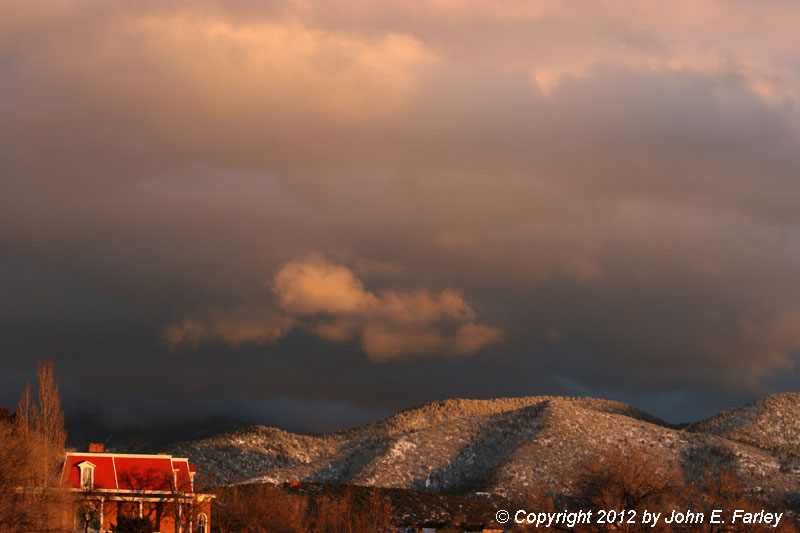 Note that the trees on the highest ridge appear white due to a combination of rime and snow. The rime accumulated on the trees earlier due to low cloud bases well below the tops of the mountains, as can be seen in the background where the retreating clouds are still shrouding the next ridge behind the one the sun is hitting. As the snow comes into contact with the rime on the trees, it also sticks to the trees, leading to the phenomenon of "snow ghosts" shown in some of the pictures farther below.
To the northeast, the underside of the clouds was being nicely illuminated by the setting sun: 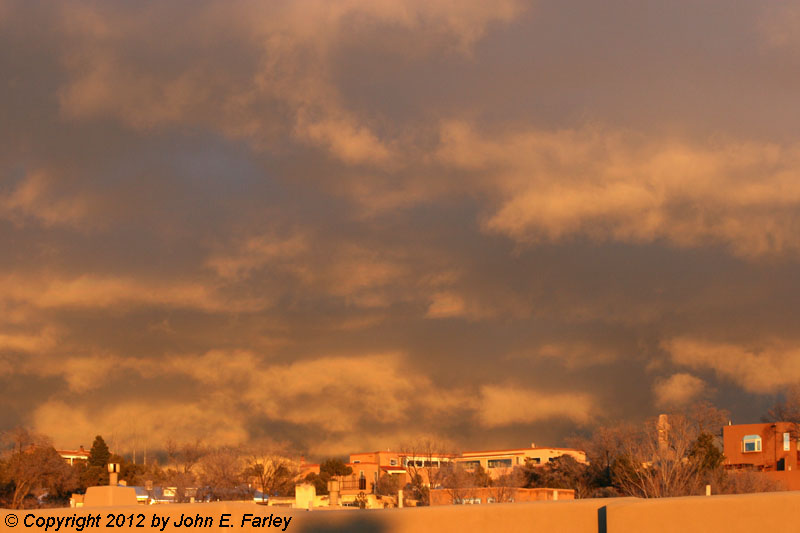 To the southwest, the retreat of the storm to the east of the Ortiz (left) and Sandia (right) mountains also offered a nice view, as seen in this panorama photomerge of two photos: 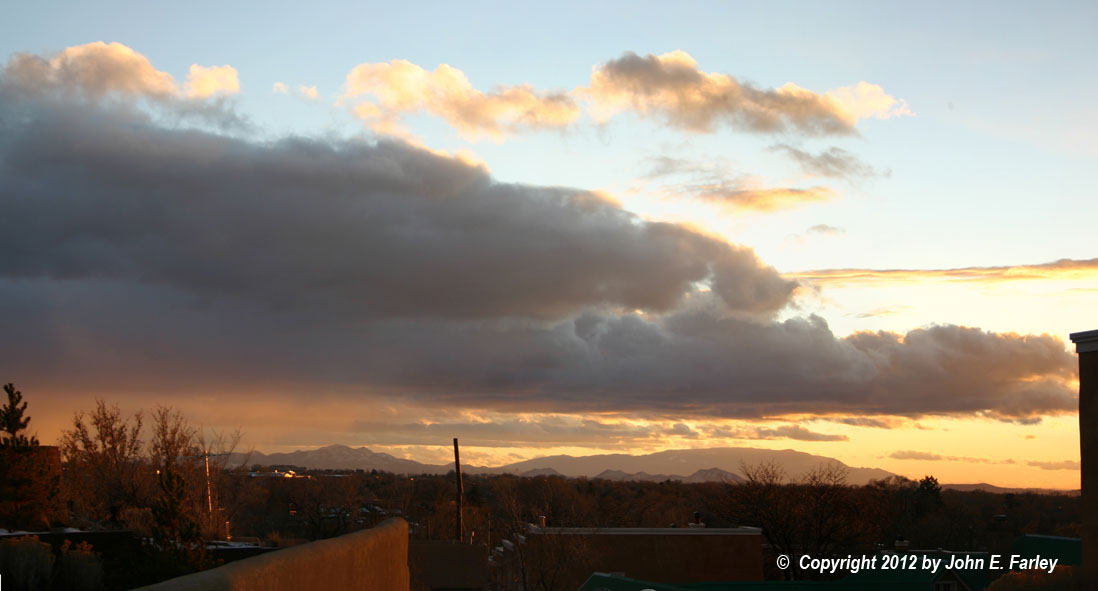 These mountains south of Santa Fe and north of Albuquerque missed the brunt of the storm, getting only an inch or two of snow. But from around Santa Fe and Las Vegas north to around Taos, the snow accumulations were much heavier above about 8,000 feet. Only warm temperatures and mixing of rain prevented a substantial accumulation in Santa Fe, where, depending on location and altitude, around a half inch to about 2 inches of wet, sloppy snow accumulated.

The main storm ended around mid-evening, but the next morning Mother Nature offered up a surprise as a final band of snow rotated around through the area north of Santa Fe, producing just a dusting in the valleys but an unpredicted additional two inches in the mountains. This additional accumulation of light, fluffy snow on top of the previous day's major accumulation made for great skiing at Ski Santa Fe, and added to the already-spectacular combination of rime and snow on the trees. When this final band of snow cleared out around noon and the sun began to come out intermittently by mid afternoon, it yielded a spectacular scene: 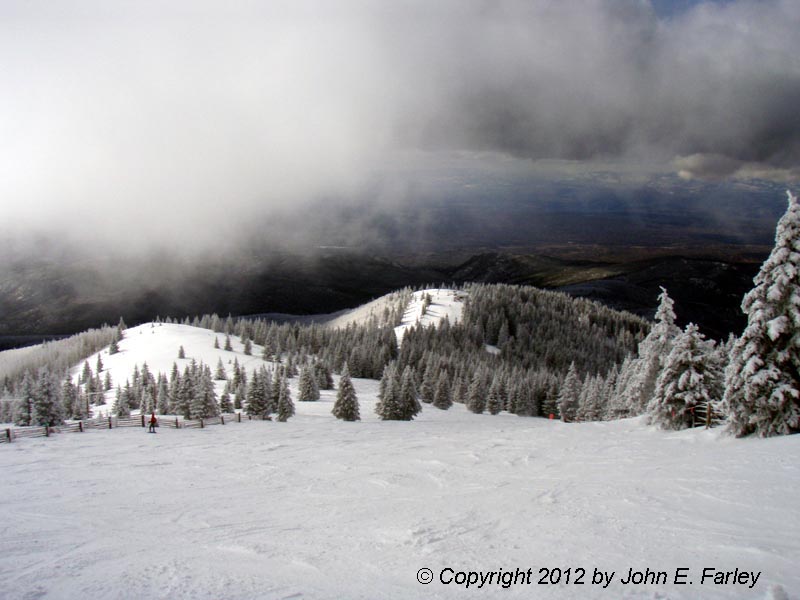 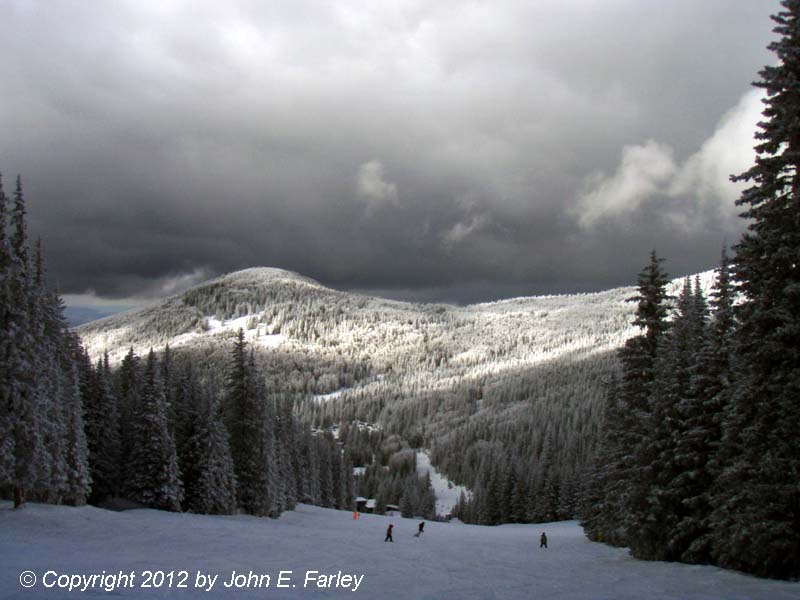 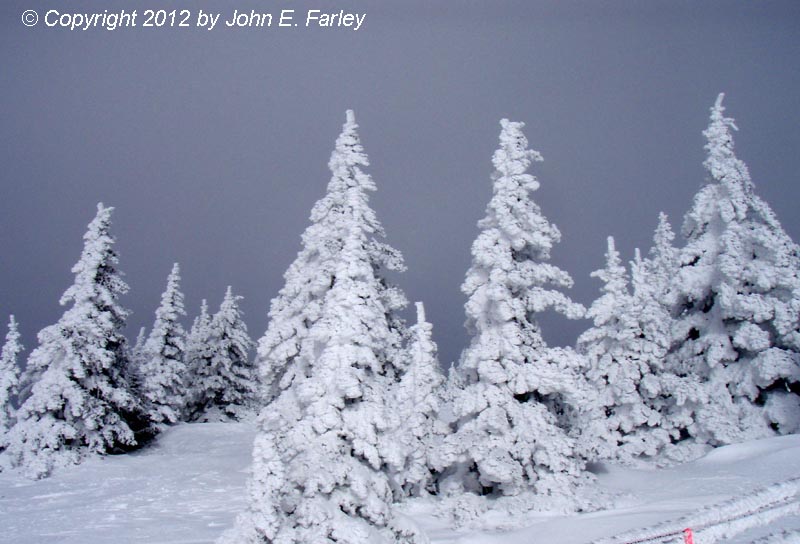 Some of the best scenes emerged around 4 p.m. when the sky fully cleared. Even in the lower reaches of the ski area and below, the scenes were spectacular. The picture immediately below was taken from the parking lot of the ski area, and the one below that a half mile or so down the road down from the ski area. 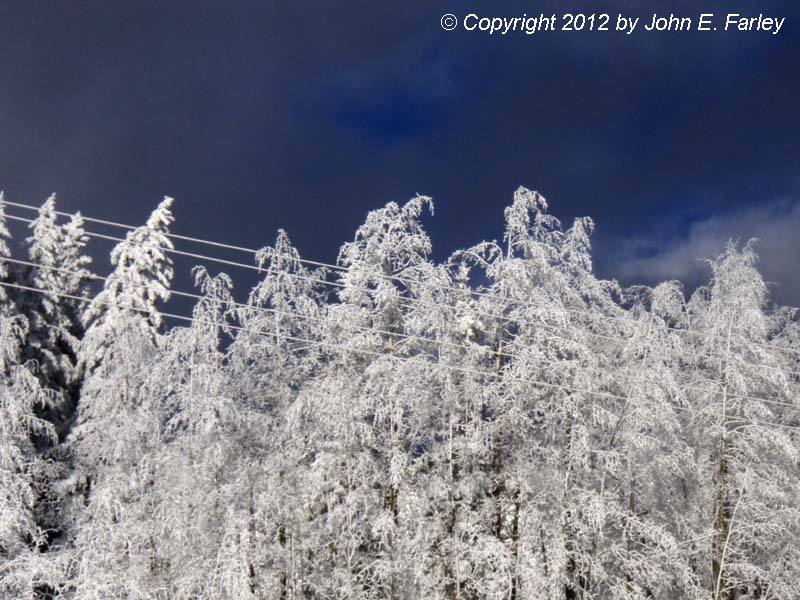 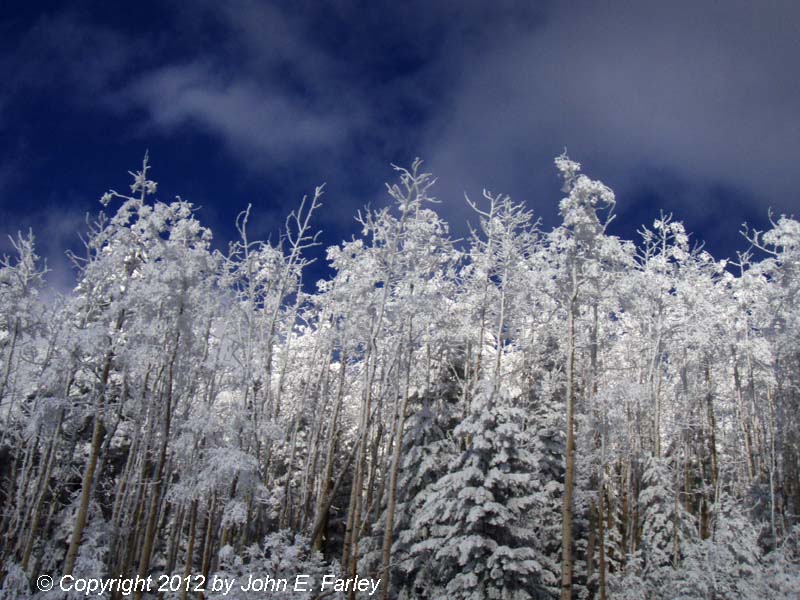 This storm was a delight all around - great for the moisture situation in NM's continuing, if hopefully diminshing, drought; great for skiing and for the ski areas, and great for photography!

P.S. - if any of you out there think that storm chasers are the only ones who do stupid things like setting up a tripod in the middle of a highway to take pictures, think again! About a half mile below where I took the last picture, I came around a curve on the still-snowpacked road and there was a local photographer with his tripod in the middle of the road taking a picture of the rimed trees! Except for his car parked on the wrong side of the road and his girlfriend kind of wandering around by the car, which warned people something was up, he probably would have been hit by someone coming around the slick curve; you couldn't see him until you were within 25 or so feet of him! Stupidity know no bounds!