I drove up to the Jemez Mountains to do some trout fishing today. However, as I arrived there around noon, it was evident that the weather had a few things to say about my plans, so a fishing trip turned into a storm observation trip for a while. As I entered the Vallez Caldera, the storm was just getting its act together over the Valle Grande, the largest of the wide open valleys of the Caldera: 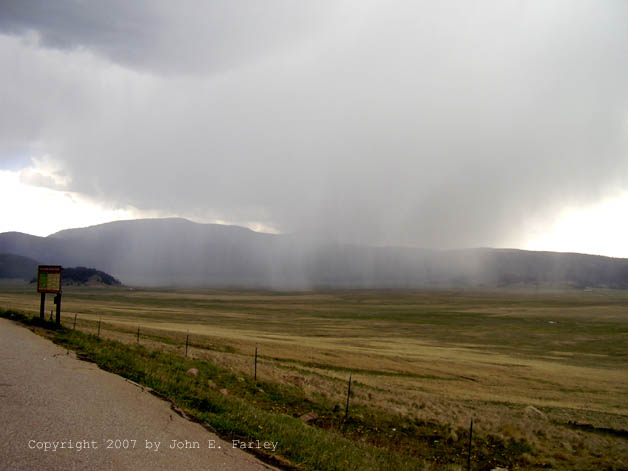 When I arrived where I had planned to fish a few miles west of where the picture above was taken, rain was falling and CG was zapping down all around me, so no fishing for a while. I decided to go back to the Valle Grande and sample the core, which was now to my east as the storm drifted toward the west or southwest. When I got there, the rain became mixed with big, wet, slushy snowflakes, kind of like small balls of slush. CGs were still zapping down all around me, so I had thundersnow, or given how wet and slushy it was, maybe I should call it "thunderslush," LOL. Here is a picture of the wet, slushy flakes hitting my windshield: 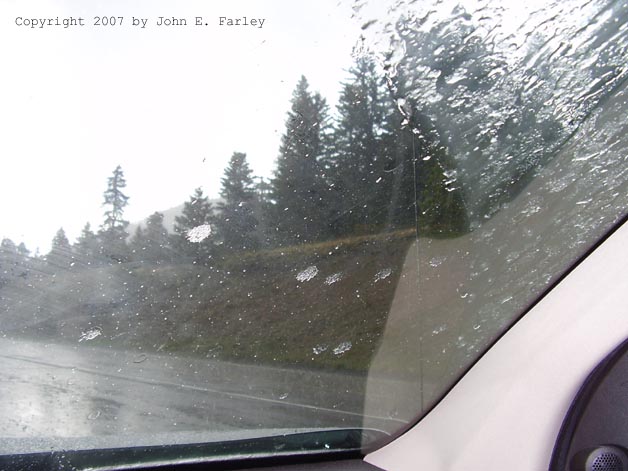 Notice the slushy accumulation on the upper right, where the wipers did not reach. I decided to go a little higher into the mountains to see if it would be more predomiantly snow, and it was, but by then the storm had nearly passed over and was weakening. When I had passed through Los Alamos on the way to the mountains, the temperature had been around 70; during the storm it fell to around 40, especially during the times when the snow was mixing in.

An hour and a half after I originally reached my fishing spot, the storm had passed and I finally got to fish. After another hour and a half, the temperature had recovered back to around 60. Later, on the way back to Santa Fe, I noticed another storm over the Sangre de Cristo Mountains near the Santa Fe Ski area (higher elevation than the Jemez) and it looked like it was mostly or all snow up there, again with thunder.