Monsoon storms developed over the Sangre de Cristo Mountains, and moved south. One storm got a severe thunderstorm warning as it moved toward I-25 between Santa Fe and Las Vegas, and I did head out to investigate - but it quickly became linear and messy, with not much to photograph. The more photogenic storm occurred later, forming on the west slopes of the mountains and dropping south over the eastern part of Santa Fe with brief heavy rain and likely some small hail. By then we were going out to dinner, but I did get this photo of the storm from the restaurant parking lot, around the time when the storm was looking its best: 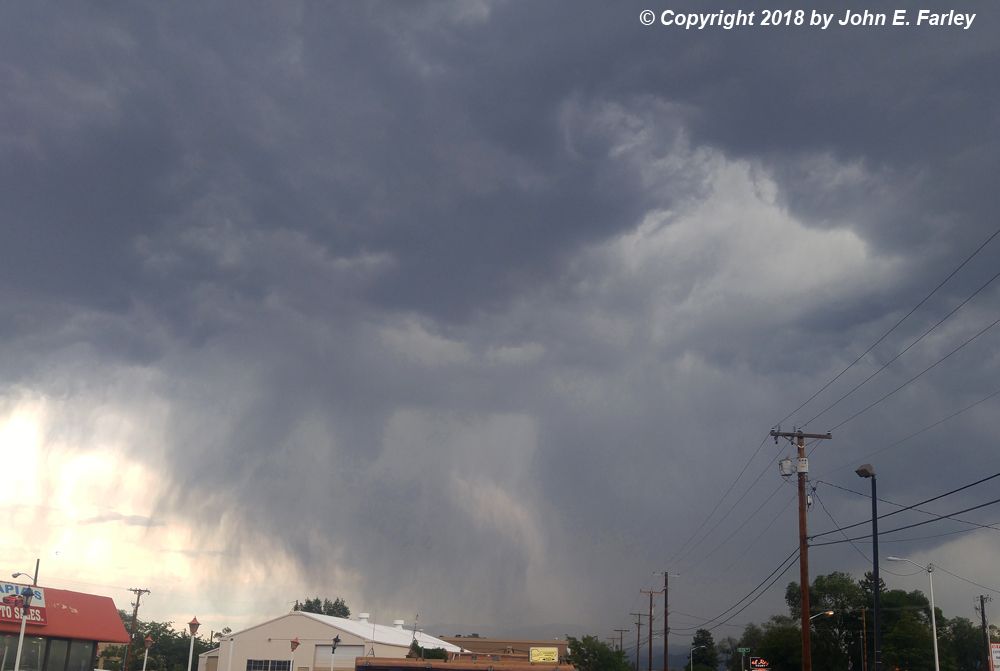 This storm did produce some minor flooding and blew down a few tree branches around Hyde State Park in the mountains above Santa Fe, but there were no reports of severe weather in the city itself.

Around 3:30 p.m., a strong storm developed about 5 miles north of Santa Fe, with little movement. We had out-of-town company, and I wanted to give them a walking tour of the downtown Santa Fe historic district. Since the storm was not moving much, I figured we would be OK, and we headed out. But we got about 2 or 3 blocks when half-inch hail began to pour down, along with some big raindrops. This occurred because a new storm had formed directly overhead. We ducked onto a porch with a roof to get out of it, and I managed to get some video:

When the storm let up a little, we continued on, but it was still raining and hailing, albeit now with the sun shining brightly, so we ducked into the Palace Cafe's bar and had a drink. By the time we finished, the skies had cleared and we resumed our tour.

The combination of monsoon moisture and a stalled back-door cold front on the east slopes of the mountains made for a potentially active storm day in New Mexico. SPC had parts of the eastern plains, near and north of I-40, under a marginal risk for severe storms near and just on the cool side of the front. A little farther west, a strong storm formed on the west slopes of the Jemez Mountains and moved south. This storm led to both a severe thunderstorm warning and a flash flood warning, with more than an inch of rain in Jemez Springs. It probably produced some decent hail, too, but it was over thinly inhabited mountainous areas for much of its life, so there were no reports. I saw the storm on radar around 1:00 p.m. and decided to head out for a look; just about as I was leaving, the SVR warning was issued. This is how the storm looked when I got my first good view of it from a high spot in northern Santa Fe: 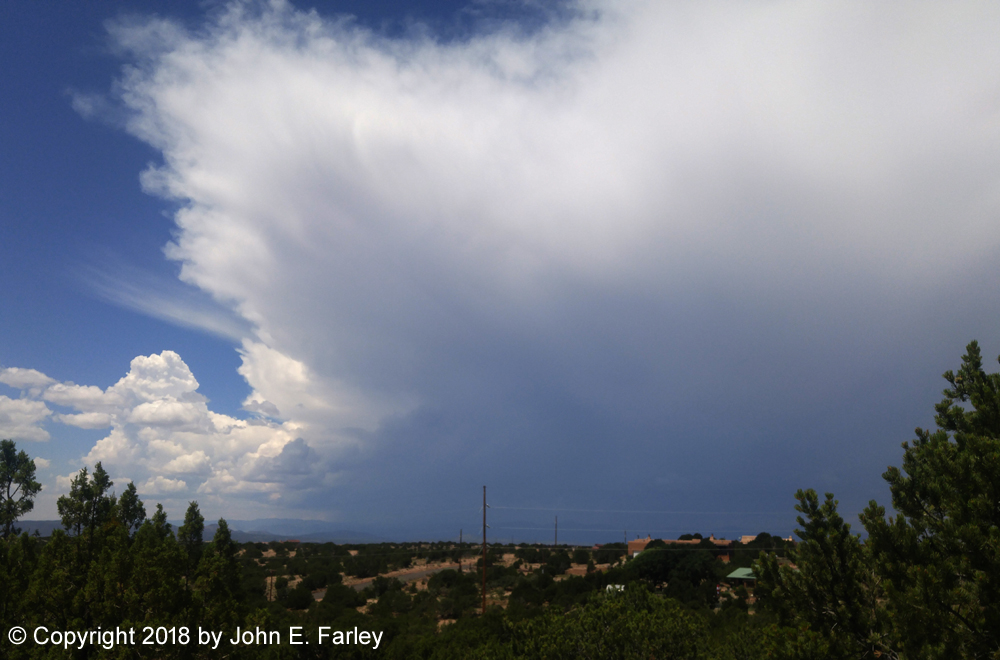 I repositioned closer to the storm, and as I got a good look at it, I noticed a tall, thin dust devil between me and the storm: 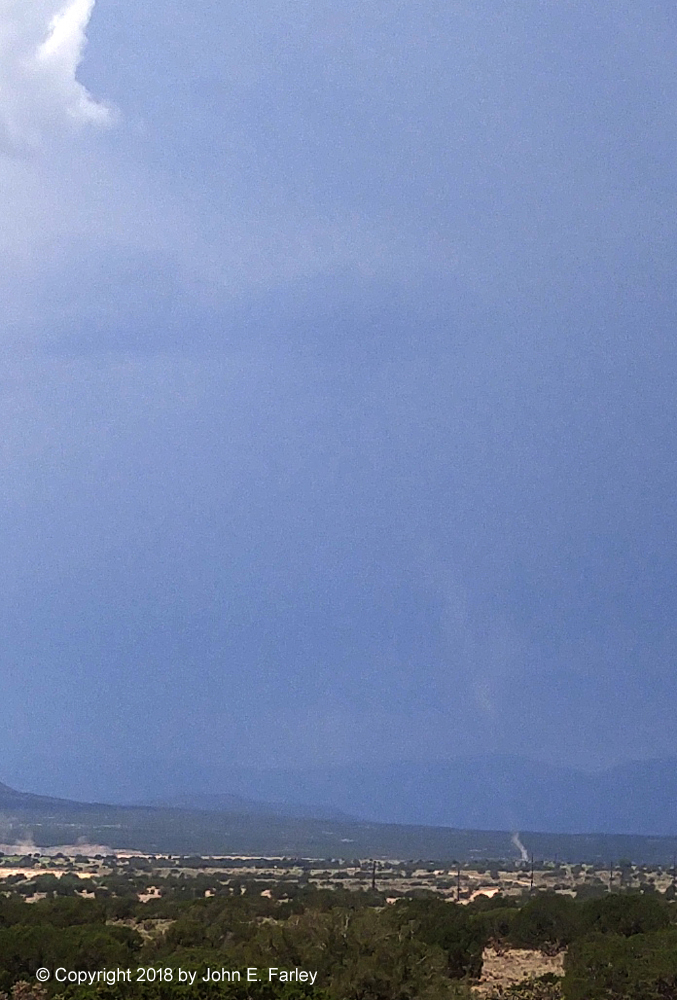 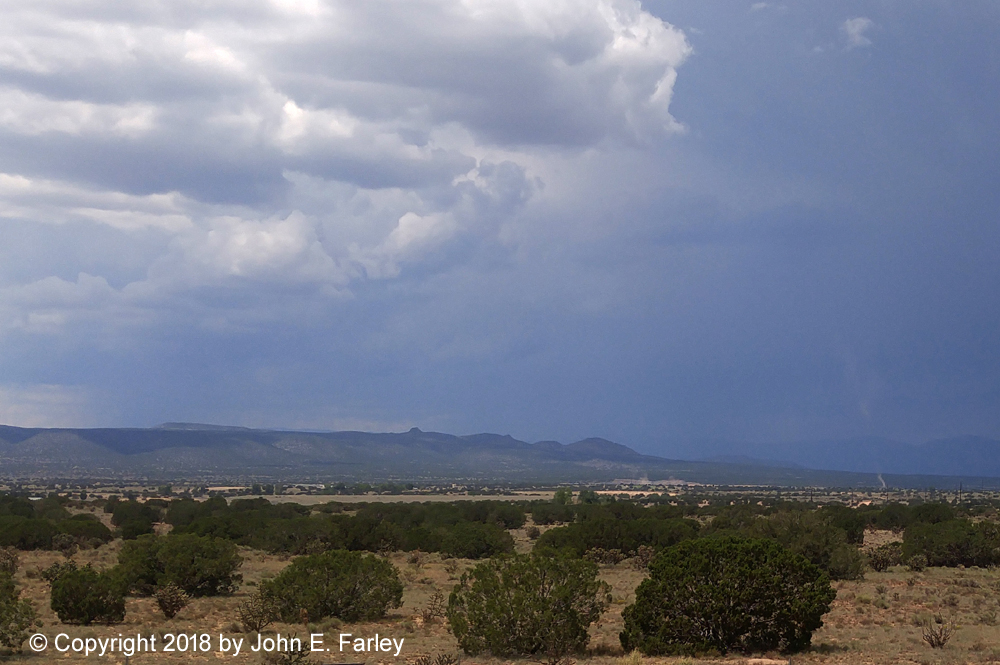 About a minute after the dust devil dissipated, the SVR warning was dropped, although the update mentioned that the storm was still capable of heavy rain and small hail. And indeed, a half hour or so later, the flash flood warning was issued. I edged a bit closer to the storm, and in the distance I did notice an interesting lowering that formed and lasted for a couple minutes: 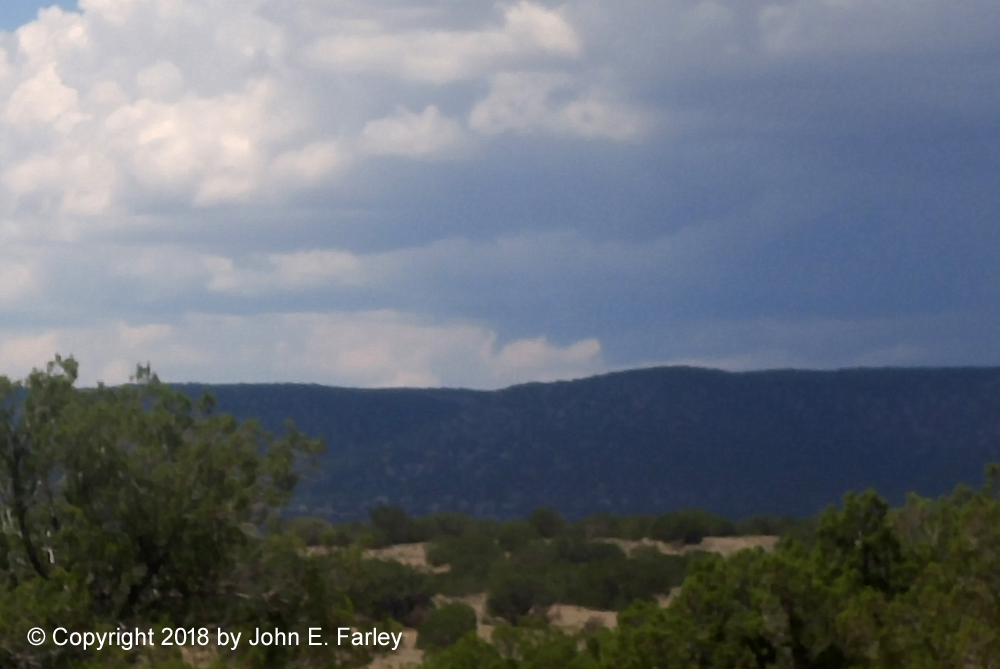 I was still much too far away to tell what it was, but there were no reports of any funnel clouds with the storm. Not long after this the storm began to weaken, and I called it a day.

On this day, monsoon moisture would again interact with a synoptic weather system to generate strong storms over New Mexico. A weather system was passing by to the north, and would drag a Pacific cold front, almost acting like a dryline, southeastward across the state, with fairly widespread storms ahead of the front and clearing behind it. SPC had the northeastern plains in a slight risk, and the Sangre de Cristo Mountains in a marginal risk, almost westward to Santa Fe. During the afternoon, a severe thunderstorm watch was issued including San Miguel and Mora Counties just to the east and northeast of Santa Fe County. Around the same time as the previous day, a strong storm formed in the same general area as the prevous day's storm, though a little farther east and south, near Bandolier National Monument. This storm would move southward toward I-25, passing through the La Cienega/La Bajada area just west/SW of Santa Fe. I headed out for that area. By the time I got there, the SVR warning had been dropped and the storm had weakened. However, a new updraft formed on its western flank and it reintensified beginning around 1:50. It even produced what may have been a brief needle funnel, which I photographed through my car window as I was re-positioning (lower center of photo):

Not entirely sure what it was, and it dissipated after a minute or so, but the storm continued to re-intensify as it moved slowly southward along the crest of La Bajada Hill: 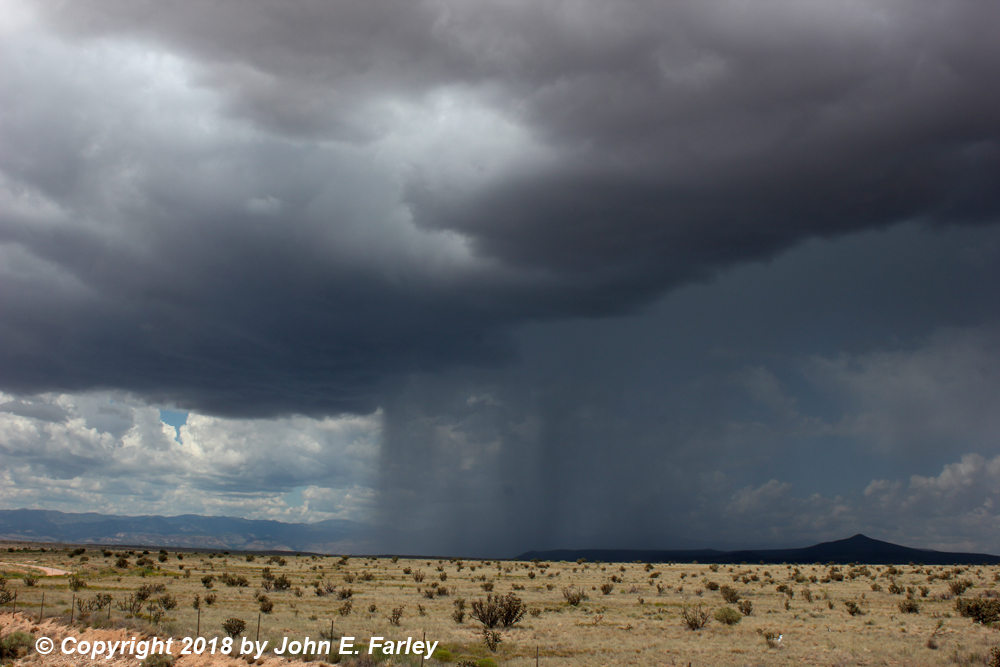 The storm reached a new peak of intensity around 2:20 as it approached I-25 in the La Bajada Hill area. It produced a rainfoot and kicked up dust ahead of the precipitation: 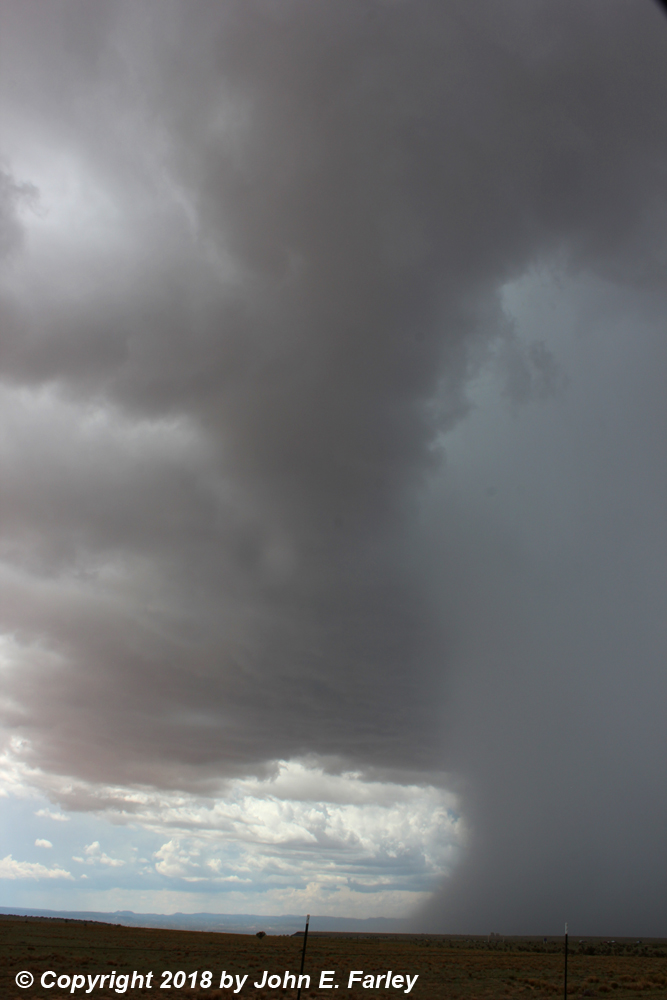 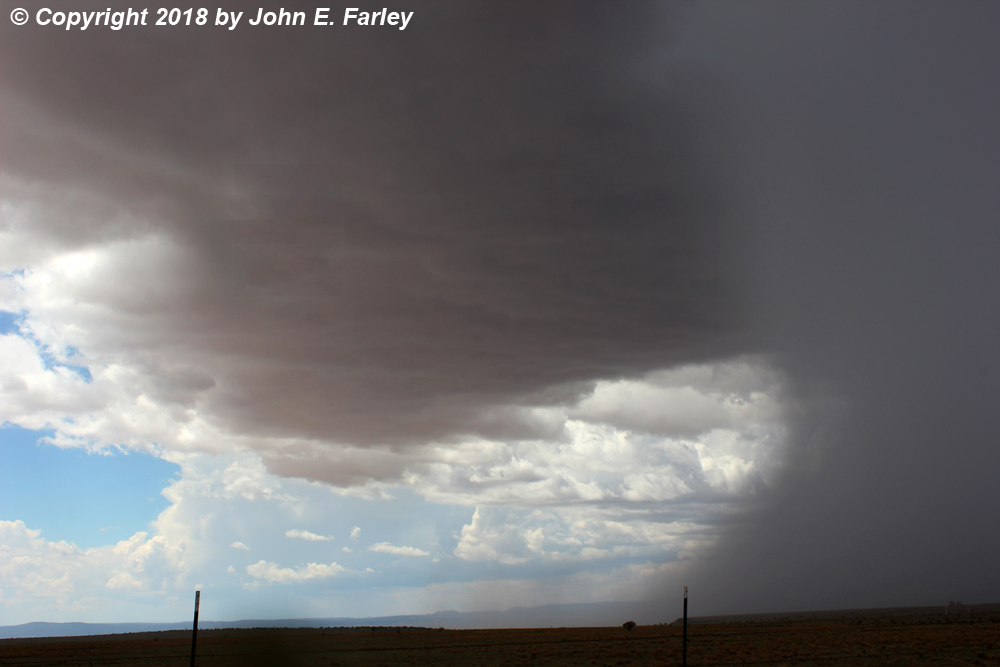 These pictures were taken looking northwest from the I-25 exit near the top of La Bajada Hill. The heaviest part of the storm crossed the highway a few miles southwest of this location. After taking these pictures I let the storm move over me, though the heaviest part of it passed west of me. I got some gusty wind, heavy rain, and a little small hail, but nothing severe. I am sure there was more wind, rain, and hail a few miles down the freeweay than were I was. Since we were meeting a friend for early dinner later, I left the storm around 3:00. At this time the front was still to the northwest, with other storms developing to the north and northeast. Later while we were eating dinner, a strong storm formed just east or southeast of Santa Fe. It went severe and dropped 1-inch hail along I-25 near Glorietta Pass, southeast of Santa Fe. After dinner around 7:30 p.m., some nice sunlit mammatus were visible under the anvil of that storm: 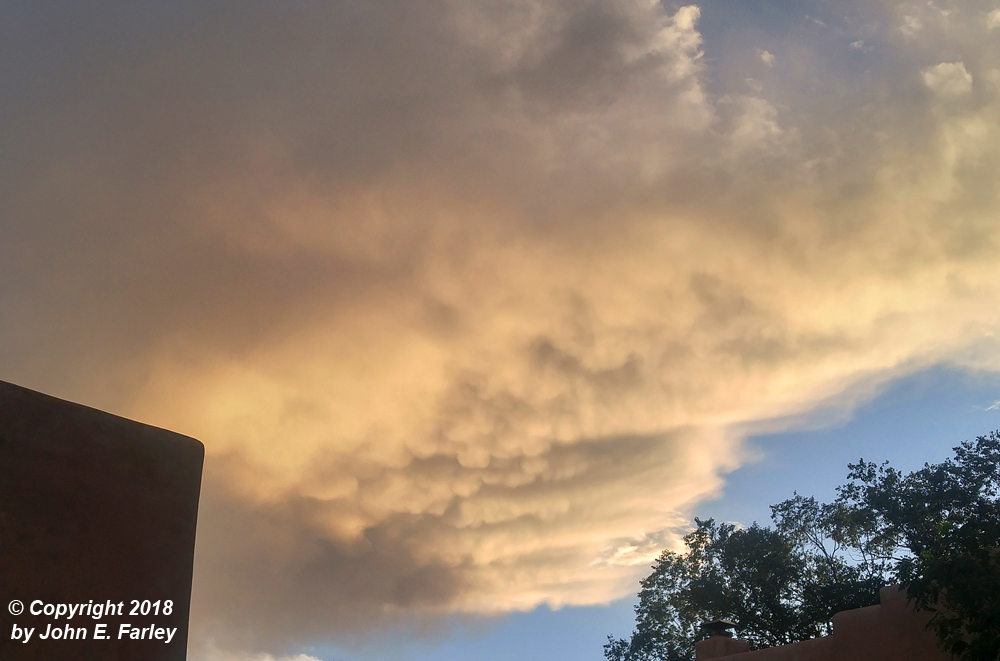