Over the extended (Friday through Monday) weekend spanning April and May, 2016, interesting and sometimes downright wild weather happened every day in southwestern Colorado including the Pagosa Springs area and the nearby San Juans. Hail, thunderstorms, heavy snow, graupel, you name it, it happened! This occurred as two closely-paced storm systems, both closed lows mainly cut off from the jet-stream flow, drifted through the area. The first, a system of Pacific origin, moved across the Great Basin toward the Four Corners region on Thursday, April 28, then across our area Friday and Friday night. The second formed in its wake over Arizona and then pretty much stalled over New Mexico from Saturday night through Monday, May 2. Here is a day-by-day account of weather I observed:

Starting Thursday night, periods of snow occurred over the San Juan Mountains. By Friday afternoon, 11 inches of snow had fallen at the Wolf Creek Ski Area, building excitement among skiers for the area's weekend re-opening Saturday, April 30 and Sunday, May 1. Not much precipitation occurred in town until afternoon on Friday, but that changed big-time around 2 p.m. Occasional light snow showers began to fall at our house between 1:00 and 2:00. Around 2:00, I heard a rumble of thunder, and since it had been snowing a little five minutes earlier, I knew it was time to grab the cameras and head out. As soon as I got to an open spot with a good view a half mile or so west of my house, I could see that there were two heavy precipitation cores - one just to the southwest and another one just to the north. I tried to take a picture, but my camera malfunctioned for some reason I could not figure out and would not turn on. (Later I removed and re-inserted the battery, and since then it has worked fine. Go figure.) Since the core to my north was heavier and easier to get to, I headed into it, figuring there would be thundersnow video opportunities there. But initially when I got into the storm, it was not snow or even graupel - it was 1/4 inch hail. I found a spot by Lake Forest to watch and got out the video camera but messed up my video in this part of the storm - it was not my day with cameras! But it was clearly hail, as it was falling much faster than graupel does and was hard. After ten or fifteen minutes of this, with occasional close bolts of lightning followed quickly by loud crashes of thunder, the hail mixed with and then gradually changed to graupel (snow pellets). These were somewhat smaller, falling moticeably more slowly, and were softer. I could now see I was near west edge of the storm, so I moved a little east to another spot on the lake and resumed videoing the storm. This time I got it right, and as the graupel continued to fall, the storm offered me up a flash of lightning followed in 3 seconds or a little less by a loud crash of thunder. Here is the video:

Shortly after this, the p-type changed from graupel to ordinary snow, which continued to fall for a while longer. No more lightning and thunder after the one on the video, though. At the location where I took the video above, the hail, graupel, and snow accumulated to a depth of one inch in no more than 45 minutes. And it was so dense and heavy that my windshield wipers stopped working and I had to scrape it off my hood and windshield before they would. Much heavier and denser than ordinary snow or even graupel, due to the fact that much of it was hail.

Here is a capture from lightningmaps.org showing five strikes in the general area west of Pagosa Springs: 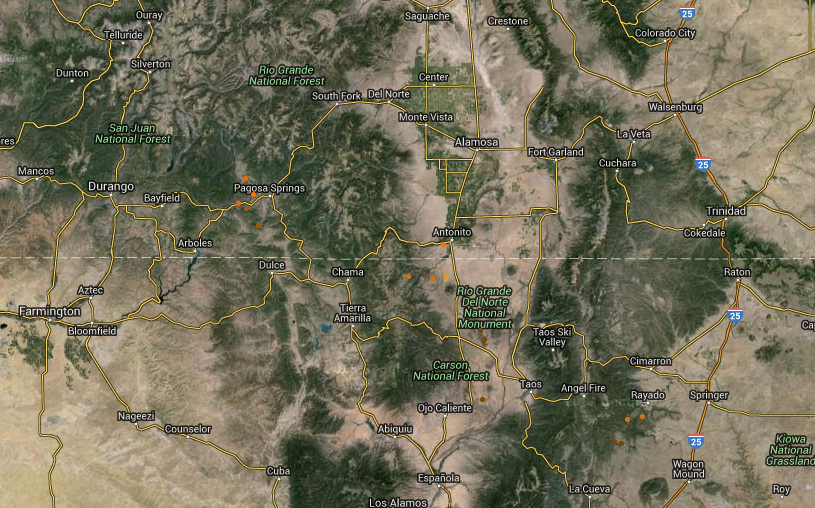 I would say I observed at least that many close flashes of lightning followed quickly by thunder. The strike under the "o" in Pagosa Springs is almost exactly where I was observing the storm. Incidentally, the temperature as this storm occurred was abound 35 degrees.

Because of the density and high moisture content of the frozen precipitation, it did not melt quickly, even though the sun came out after the storm and the sun angle was high. At our house, perhaps a mile ESE of where I videoed the storm, we got about a half inch of hail, graupel, and snow. In this picture, you can see that most of it was still there four hours later: 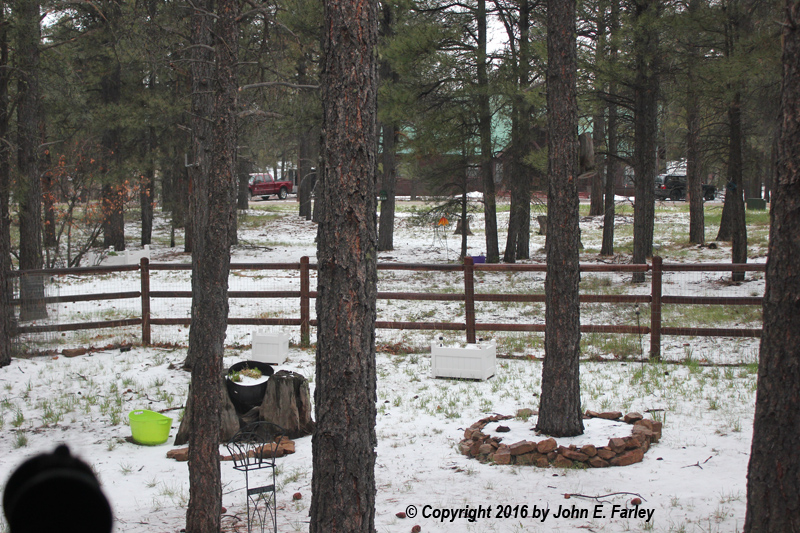 A couple more inches of snow fell overnight at Wolf Creek Ski Area, bringing the total there to 13 inches. In the morning, it was bright and sunny, and the snow, though a bit heavy, was excellent for the last day in April:

Although the morning was sunny, flurries had begun by late morning, and by early afternoon, a light, steady snow was falling at the ski area. Enough sun was getting through the clouds that, with the high spring sun angle, the snow was getting quite heavy and sticky by early afternoon. For this reason, along with the fact that I had gotten there early and this was my first ski day in two weeks, I was worn out and ready to call it a day by around 1:30. When I got home it was warm and sunny, with no sign of the previous day's frozen precipitation except where it had slid off the roofs. I figured I had better take advantage of the warmth and dryness and cut the front lawn, because wet weather was likely on the way back. Not too long after I had finished cutting the grass, I noticed dark updraft base overhead and just to the southeast. This was part of a trend of increasing shower activity in and near the mountains, where the snow was starting to ramp up again as the second closed low drifted into NM and closer to our location. The showers were drifting slowly to the north. Next thing I knew, hail was coming down. Not just pea-sized either - most of it was 1/2 inch and a few of the biggest ones, like the one at the lower left of the picture below, were dime-sized: 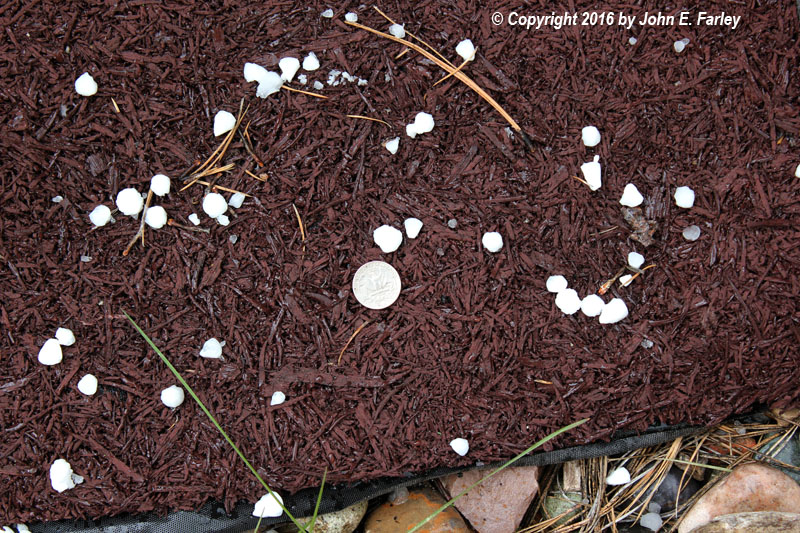 Here is a short video clip of the hail that I got through the window of my office looking into the front yard.

Note that the sun was shining the whole time the hail came down - we were right under the cloud base and with the low angle of the afternoon sun, it was bright and sunny as the hail fell. And yes, that is our cat meowing at the end of the video. The hail fell for about 4 or 5 minutes, from around 4:40 to around 4:45 p.m. Although some of it was pretty hard, some of it was a little softer than usual hail, kind of like a cross between hail and graupel. I suspect these hailstones were created through a mix of dry accretion (which leads to graupel) and wet accretion (which leads to hail). There was never any thunder or lightning with this hail, and no rain or snow mixed with it either as far as I could tell.

During the evening, the radar showed a large and growing area of precipitation over the northern half of New Mexico, with the leading edge gradually pushing north in our dirction. However, it had not reached our area by the time I went to bed around 11:30.

When I got up, I was greeted by 2 inches of snow in the front yard, and light to moderate snow still coming down. I phoned this in to NWS GJT, the third day in a row that I had a spotter report to give them. The snow stuck to the branches of the trees, creating a "winter wonderland" effect, even though it was not winter, but May Day. Here is a picture:

Figuring if it was snowing at my house it would really be snowing at Wolf Creek, I moved along a little faster than I had planned to head up for the last day of the ski season there. The chain law was in effect, and even though it was May, the pass was difficult, with more people having problems getting up than I had ever seen. Two semi drivers who had disregarded the law got stuck, one diagonally in the hairpin turn at the scenic overlook. Looked like they also got tickets for disregarding the chain law, as CSP were on the scene! A little farther up, some guy who had the lack of judgment to try to pull a trailer up the pass was also stuck at a 45 degree angle. Add to that an abandoned motorcycle (!) and a van in the ditch, and you kind of get the idea. My AWD Acadia had no problem, though, and before long I was skiing some of the best snow of the whole season. The temperature was in the mid 20s through the morning, and the 7 inches of snow (on top of the 13 from the previous storm) that came overnight and through the day was light and fluffy. What a great way to end the ski season!

Intermittent light snow and rain continued in town in the late afternoon and evening, and when I went to bed it was snowing hard again.

Overnight another half inch or so of snow fell at the house, but it was sunny in the morning and as the temperature rose into the low 50s, the snow quickly melted. No precipitation occurred at our house for the first time in days, but snow showers did redevelop over the mountains, and by around 5:30 p.m. some impressive snow thunderstorms were occurring there. These slowly drifted southeastward into the south San Juan Wilderness. A little before 7 p.m. I headed out to a couple of open spots to get some pictures of these, and they were indeed photogenic: 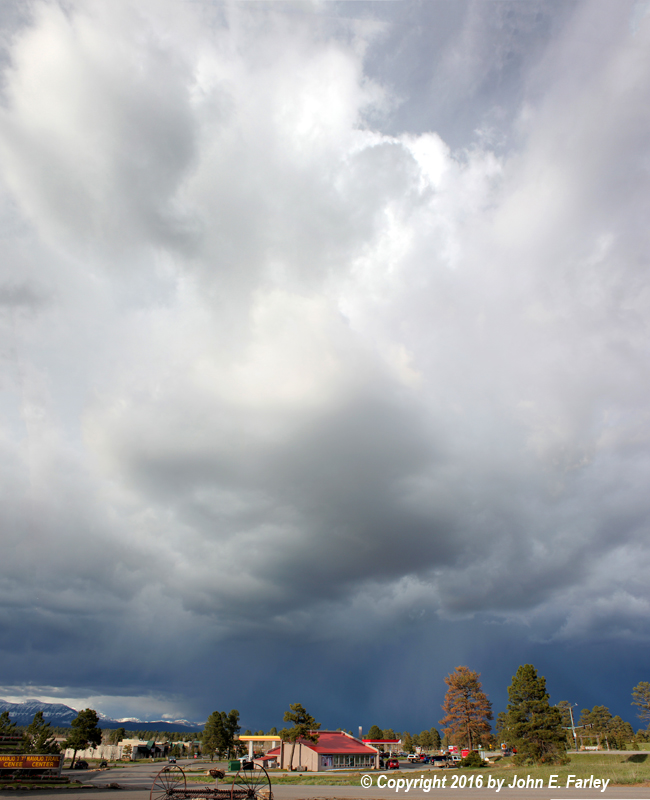 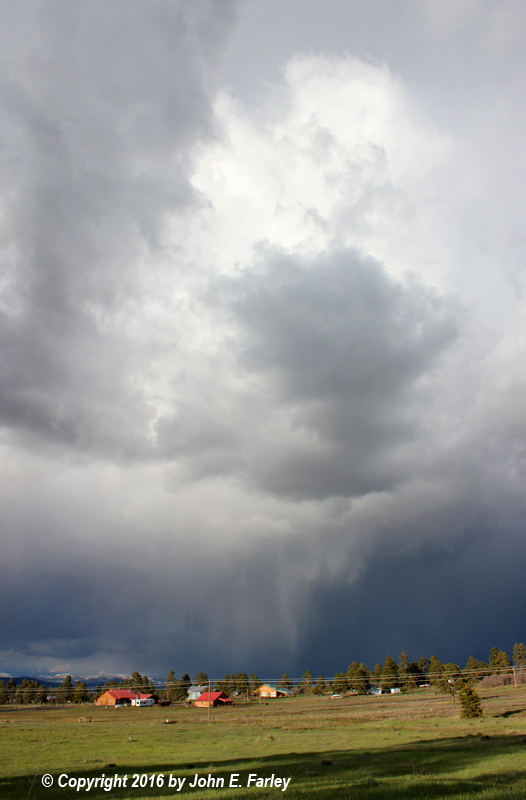 I am sure the p-type in these storms was mainly snow and graupel, though I would not be surprised if there was some hail in the heaviest cores. Winter radar did indicate the p-type as snow in all the late afternoon and evening storms in the San Juans. And the lightning detector did indicate several strikes in the South San Juan Wilderness around the times I took these photos, although I was too far away to hear any thunder.

All in all, it was a very interesting 4 days of weather in Pagosa Country, especially for the end of April and beginning of May!